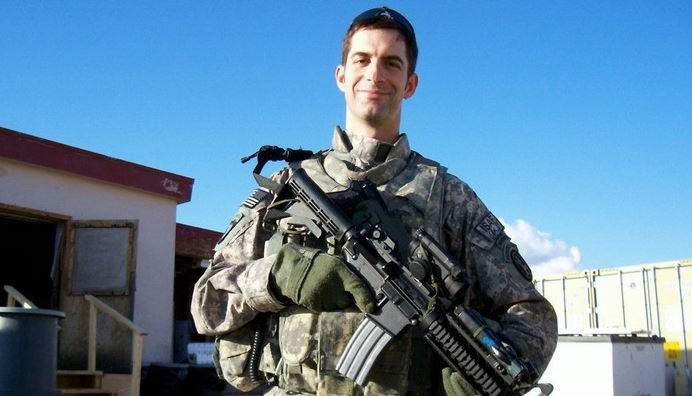 || By FITSNEWS || We just penned a column on the dangerous rhetoric emanating from the mouth of Al Gore … who for reasons surpassing understanding is being touted as a possible 2016 presidential contender.

Now we once again examine the dangerous rhetoric emanating from “Republican” politicians – who manifest their statism in other ways.  And no, this isn’t another post about liberal GOP Senator (and 2016 fringe candidate) Lindsey Graham‘s support for using U.S. troops on members of Congress who don’t agree with him …

No, this post is devoted to U.S. Senator Tom Cotton – America’s “new warmonger.”

Cotton made national news this month when he was the lead signatory on a letter to the government of Iran – a document which warned its leaders that any deal they reached with U.S. president Barack Obama on the status of their nuclear program was subject to the approval of Congress (and likely to be scrapped by a “Republican” president).

Progressives howled – accusing Cotton and his co-signers of treason.  Conservatives rejoiced – apparently unaware that many of the GOP warmongers baring their teeth at the Iranians have pushed for an alliance with the middle eastern nation in response to the “growing threat” posed by the Islamic State in Iraq and Syria (ISIS).

Oh well, this is the military-industrial complex’s foreign policy … which basically consists of arming everybody under the sun with U.S. weapons, until they become sufficiently dangerous that we need to invade them (using more U.S. weapons).

In his first speech from the well of the U.S. Senate this week, Cotton unleashed a new military doctrine on the world – not just your typical deluded GOP Pax Americana but something broader, more Biblical.

“An alarm should be sounding in our ears,” Cotton said. “Our enemies, sensing weakness and hence opportunity, have become steadily more aggressive. Our allies, uncertain of our commitment and capability, have begun to conclude that they must look out for themselves, even where it is unhelpful to stability and order. Our military, suffering from years of neglect, has seen its relative strength decline to historic levels.”

Wait … what?  There’s an alarm sounding in our ears, alright … in fact it’s been sounding for a long time, it’s just been ignored.

Cotton of all people should know our country just spend $4-6 trillion over the last decade on a “War on Terror” that’s apparently made us more vulnerable to radical Islamic extremism than at any point in our history.  Oh, and spending on the new “War on Terror” is surging.

That’s not enough for Cotton, though.  He wants America to possess “such hegemonic strength that no sane adversary would ever imagine challenging the United States.”

“Our enemies and allies alike must know that aggressors will pay an unspeakable price for challenging the United States,” Cotton said. “The best way to impose that price is global military dominance.”

Our nation, lacking sufficient resources and devoid of moral authority (to say nothing of a credible justification, clearly defined objective or exit strategy), is to be Tom Cotton’s instrument of domination.

He is essentially saying to the “enemy” – which could apparently be anybody – what former Soviet premier Nikita Khrushchev said to a room of Western ambassadors in 1956.

As we’ve said before, America should absolutely wage war against “terror” – in the event there is a credible threat to the security of our homeland or to our nation’s legitimate global interests.  Such operations are expressly provided for in our nation’s Constitution – and we believe they should be funded commensurately (starting with a more secure border).

We also have never supported the notion of a “proportional response.”  We believe America should channel what screenwriter Aaron Sorkin once referred to as “the fury of God’s own thunder” in the event military force is required.

But protecting the homeland from threats foreign and domestic should never be an excuse to engage in needless provocation.

And that’s what “Cotton Doctrine” is all about.  “Global military dominance” is an explicit embrace of more costly, failed nation-building – of an interventionist foreign policy approach that has landed America deeper in debt (and deeper in danger).  It is the explicit embrace of subsidizing defensive and/ or offensive operations on behalf of nations which are fully capable of defending themselves.  It is the explicit embrace not of global strength, but of global weakness – of binding our resources to “allies” who bark at us like junkyard dogs whenever we dare to “second guess” how they use our borrowed billions.

And one more thing … it is an explicit invitation to our enemies.

So Cotton can rattle his saber all he wants (and to be fair, he’s not a play pretend soldier liker Graham).  But make no mistake: “Global military dominance” is not something our nation can afford – either in blood or treasure.  And even if we could afford it, it is a delusion to think achieving it will make us any safer.

Thank God this guy was not around during the Cuban Missile Crisis.

The rest of the world just voted America the #1 threat to peace. Gee! Wonder where they get that idea?

I know right..They don’t know that Obama got the Nobel Peace Prize…

Who else got the prize? I forget. Reagan? Bush? Netanahyu?

Do you think Obama deserved it?

So, what did a Liberal girl named Emily Peterkin do to you to make you take on her name?

Are you too Stupid..or Too scared to answer?

Gee I wonder too! No country that has an alliance with the USA ever gets attacked by a foreign country. The closest situation was the Falklands a few minor incidents with South Korea.
We end up getting involved when we don’t have a defensive treaty with a country before the conflict begins. Examples: WW I, WW II, South Korea 1950, Vietnam, Afghanistan before the Soviet invasion and Kuwait.
If you want peace, inside your borders, the best guarantee is a defense treaty with the USA.

We don’t not have a defensive treaty with Kuwait before or after it was attacked. We share military technology and have military exercises with Israel, but don’t have a defense obligation to Israel. We have agreements with Israel ( Camp David Accord ) that gives them aid. No agreement with Georgia.
We signed with Russia, Great Britain and Russia a guarantee of Ukraine’s borders, it didn’t require a military response.

We didn’t have an alliance with Kuwait, yet things didn’t work out too well for that invading force.

Zackly, and without any complex treaties or pre-determined formal alliances.

Effectively charming hearts and minds, one post at a time.

Obama does it w/ each lost job, ISIS attack ,or insurance premium jack-up. So I can do what the F*#k I want…Dumb@$$…It won’t make a difference.

Are you so Stupid (no need to answer) you’ve already forgot what happened Nov. 4?…LMAO..

“It won’t make a difference.” EXACTLY! Hallelujah, you finally get it. None of your profane diatribes make any difference except to make a mockery of yourself. Why you waste your time with a post that says “FITS: The Old Dumb@$$….LMAO…”, I have no idea. Nov. 4 didn’t make a bit of difference, either. Liberalism still is on display thanks to you and your liberal establishment Republican friends.

Now oddly, how do you figure each lost job when we’ve had huge net gains of jobs for five and half years. I mean, really, that’s like saying you lost your penny when someone gave you $100.

That’s bull. Breaking a FT job in 2 PTs, is not a new job. Neither is Temp assignments counted over and over as a new job…

Al Gore never claimed to invent the Internet. Unfortunately, some of his comments about the ‘Net were easily misinterpreted.

I get it…Dan Ruck is someone you hate, and you’re trying to make him look stupid…right? …Nice concept…LMAO…

Looks a good bit like Dabo…except Dabo is smart in comparison.

So let me get this straight – according to Tommy Silk, after 12 years of the highest military spending ever, our military is somehow weakened. Dang!!! And the fix, according to Tommy Polyester – is to spend more money. Sounds a lot like SC school systems.

Tom Cotton has made himself the foreign and defense policy mouthpiece for the GOP. I suppose the role was ceded to him because McCain, Graham, and others have been discredited. What are Cotton’s bona fides? He represented a district in rural Arkansas for one term in the House and has served in the Senate for a whole two months. I guess in GOP World that makes him Winston Churchill? Or the new Sarah Palin? Can he see Russia from his house?

He gets top billing because he’s still welcome on Hannity. McCain and Graham have been banned by Sean for saying publicly that Sean was wrong.

What a POS this guy is…

But “global military dominance”? No thanks. I don’t want to fight for it nor pay for it. Dominance is not defense.

So, our economy EXISTS primarily to fund our military? http://www.bgladd.com/IlDuceCotton.jpg

Senator Cotton is Sheldon Adelson/AIPAC and the Koch Brother’s sock-puppet. He just repeated Bibi’s comment that there will be no two state solution.