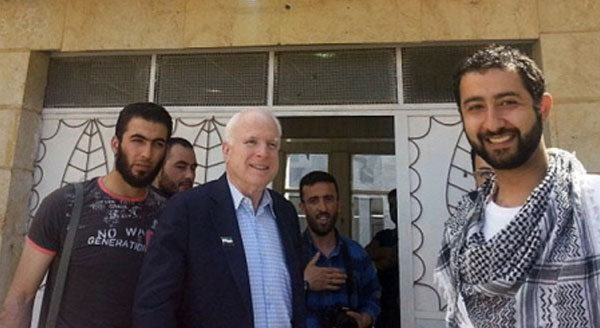 Take U.S. Sen. John McCain (RINO-Arizona) – who along with Sen. Lindsey Graham (RINO-S.C.)  is one of the top “war gods” in the federal government.

McCain and Graham are all over the administration of Barack Obama to launch a third crusade in Iraq – where fighters linked to al-Qaeda are about to overthrow a regime hand-picked by the Central Intelligence Agency (CIA) at the end of America’s second crusade.

To support their calls for military action, McCain and Graham are having to flip-flop multiple “allegiances.”

They are also pushing for an alliance with Iran – the same country Graham wanted to invade less than a year ago (and the same country he said would detonate a nuclear device in Charleston harbor in the event America didn’t  support al-Qaeda backed fighters in Syria).

Anyway, this week the “terrorist group” ISIS – or the “Islamic State of Iraq and Syria” – released pictures of its members hamming it up with McCain, who helped secure all sorts of money and weapons for them.

Here’s the bottom line, people: If there is a terrorist attack in America perpetrated by ISIS or its affiliates, we will have no one to blame but John McCain, Lindsey Graham and the Washington sheeple who refused to stand up to them.