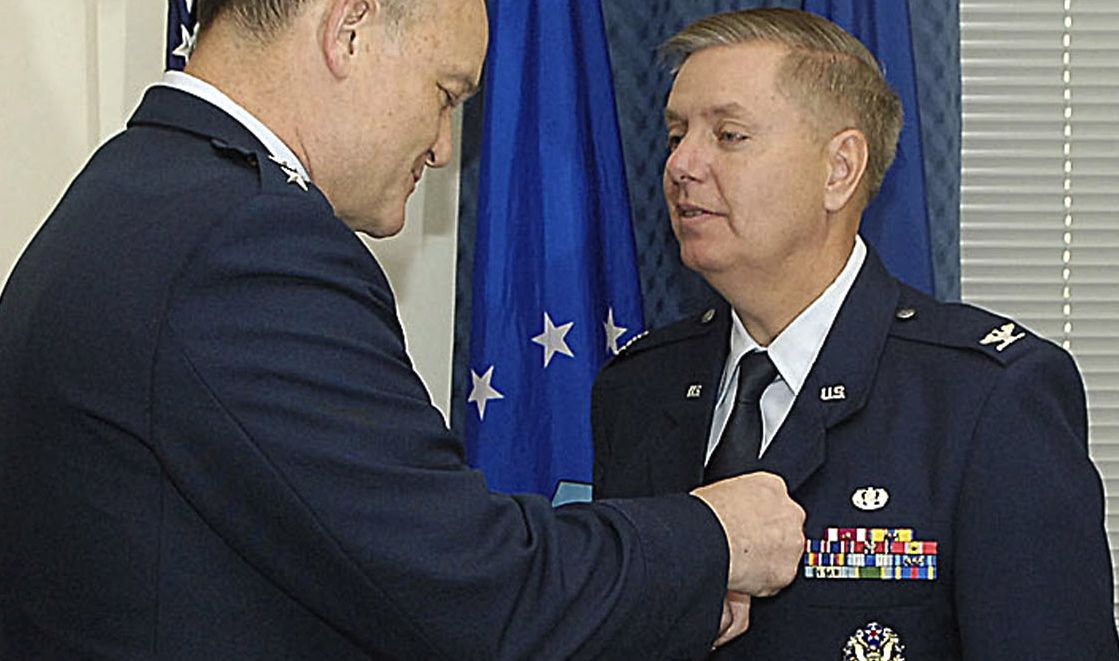 As part of his efforts to undo two-and-a-half centuries of American liberty, war-mongering fiscal liberal Lindsey Graham likes to refer to people as having been “radicalized.” In fact it’s one of his favorite new turns of a phrase …

Well you know what “radicalizes” us? Hypocrites like Graham who break their word to taxpayers … repeatedly. And cowards like Graham who condemn people as non-patriotic just because they don’t want to spend money (and blood) America can’t afford on conflicts halfway around the world.

But Graham isn’t just a whore for our unwieldy taxpayer-subsidized military industrial complex – he’s a whore for all sorts of special interests. In fact he’s everything that’s wrong with Washington, D.C. – and he’s a “Republican.” Hell, recent television ads run by those same special interests are trying to fool impressionable South Carolinians (of which there are many, sadly) into believing that Graham is a “conservative.”

Meanwhile Graham – in an effort to ramp up those “conservative” credentials in anticipation of his 2014 reelection bid – is raising holy hell (again) in Washington, D.C. over the 2012 terrorist attack on a U.S. Consulate in Benghazi, Libya. His public relations machine is also placing plenty of nice puff pieces in the Beltway media extolling his statesmanship and proclaiming his invincibility.

Meanwhile the S.C. “Republican” Party has made it clear it is all in for Graham – and we expect the vast majority of its lemming-like elected officials to follow suit.

Whoring is good business, too, it would seem. Graham has $5.4 million in the bank roughly thirteen months out from his Republican primary election. As much as $10 million more is expected to be spent on his behalf in the form of independent expenditure advertisements and spots run by various official “Republican” groups.

That is an imposing mountain of money – one that has frightened off most “credible” (i.e. well-funded) candidates.

But “Miss Lindsey” has a problem … and no, we’re not referring to the daily speculation about his sexual orientation (he insists he “ain’t” gay). 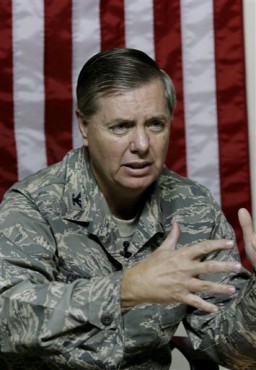 Graham’s potential Achilles’ heel? The repeated lies he told about his military service during the early part of his career.

These claims went unchallenged until February 1998, when The Hill published a story about Graham’s fitness to sit in judgment of then-President Clinton – who at the time was facing impeachment for lying about his relationship with former White House intern Monica Lewinsky.

Graham’s problem (then and now)? He was – and is – also a liar. He is not a Desert Shield veteran, nor is he a Desert Storm veteran, nor is he a Gulf War veteran. While real soldiers were shipping off to fight in these engagements, Graham was a military lawyer whose closest brush with death came in preparing the wills of departing military personnel. Not only did he never see any action, he never even left South Carolina.

Asked to explain himself, Graham told The Hill it was all okay because he “never intended” to lie.

Here’s the thing: Graham did lie. Clearly. Repeatedly. And no doubt with every intention of deliberating inflating his political resume. By his own definition (and by anybody’s definition) that makes him “not fit to serve in Congress.”

Graham’s current biography – which has been in place for years – contains amended wording regarding his military service.

“During the first Gulf War in the early 90’s, Graham was called to active duty and served state-side at McEntire Air National Guard Base as Staff Judge Advocate where he prepared members for deployment to the Gulf region,” it states.

Why are we bringing this up fifteen years after the fact?

First, and most honestly, we can’t stand Graham. For all the reasons enumerated at the outset of this piece, we believed he was unfit for office long before we knew he had lied about his military service.

This is just a little additional icing on the cake …

But beyond that it’s worth bringing up as it relates to how scandals are treated in the new media marketplace. With the exception of a brief mention on Graham’s Wikipedia page (which links to a 2010 article posted on the website Media Matters) there is virtually no trace of this scandal on the internet.

It cropped up fifteen years ago briefly … then vanished.

It’s time to change that.

Every pro-taxpayer, pro-freedom, pro-free market, pro-limited government advocate (in South Carolina and across the country) should blast this story to their social media and e-mail lists. And every national advocacy organization contemplating jumping into this race against Graham ought to take a hard, fresh look at this scandal – especially Graham’s ridiculous “I never intended to lie” response.

Because if this particular blow is delivered effectively and in the right context, it could be a strike to the jugular.