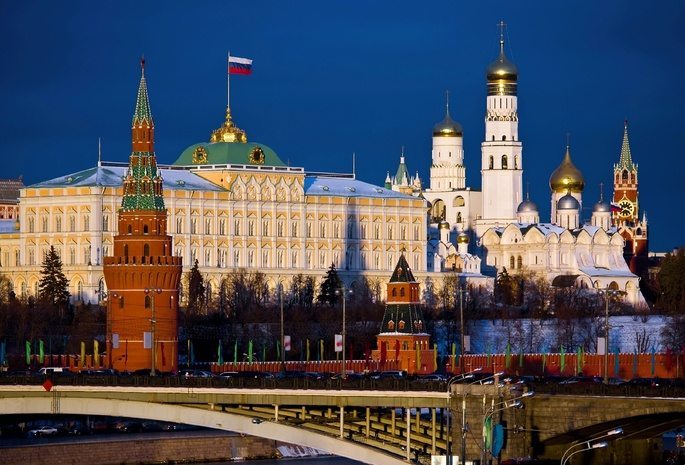 By RON PAUL || Last week the U.S. House voted overwhelmingly in favor of an anti-Russia resolution so full of war propaganda that it rivals the rhetoric from the chilliest era of the Cold War.  Ironically, much of the bill condemns Russia for doing exactly what the U.S. government has been doing for years in Syria and Ukraine!

For example, one of the reasons to condemn Russia in the resolution is the claim that Russia is imposing economic sanctions on Ukraine.  But how many rounds of sanctions has the U.S. government imposed on Russia for much of the past year?  I guess sanctions are only bad when used by countries Washington doesn’t like.

The resolution condemns Russia for selling weapons to the Assad government in Syria.  But the U.S. has been providing weapons to the rebels in Syria for several years, with many going to terrorist groups like al-Qaeda and ISIS that the U.S. is currently bombing!

The resolution condemns what it claims is a Russian invasion of Ukraine (for which it offers no proof) and Russian violation of Ukrainian sovereignty.  But it was the U.S., by backing a coup against the democratically elected Viktor Yanukovych government in February, that first violated that country’s sovereignty.  And as far as a military presence in Ukraine, it is the U.S. that has openly sent in special forces and other military advisors to assist the government there.  How many times have top U.S. military and CIA officials visited Kiev to offer advice and probably a lot more?

The resolution condemns Russia for what it claims are attempts to “illicitly acquire information” about the U.S. government.  But we learned from the Snowden revelations that the NSA is spying on most of the rest of the world, including our allies!  How can the U.S. claim the moral authority to condemn such actions in others?

The resolution attacks Russian state-funded media, claiming that they “distort public opinion.”  At the same time the bill demands that the thousands of U.S. state-funded media outlets step up their programming to that part of the world!  It also seeks “appropriate responses” to Russian media influence in the rest of the world.  That should be understood to mean that U.S. diplomats would exert pressure on foreign countries to shut down television networks like RT.

The resolution condemns what it claims is Russia’s provision of weapons to the Russian-speaking eastern part of Ukraine, which seeks closer ties with Russia, while demanding that the U.S. government start providing weapons to its proxies on the other side.

As I have said, this is one of the worst pieces of legislation I can remember.  And trust me, I have seen some pretty bad bills.  It is nothing but war propaganda and it will likely lead to all sorts of unintended consequences.

Only ten Members – five from each party – opposed this reckless resolution.  Probably most of those who voted in favor did not bother to read the bill.  Others who read it and still voted in favor may have calculated that the bill would not come up in the Senate.  So they could vote yes and please the hawks in their districts – and more importantly remain in good graces of the hawks who run foreign policy in Washington – without having to worry about the consequences if the bill became law.

Whatever the case, we must keep an eye on those Members of Congress who vote to take us closer to war with Russia.  We should thank those ten Members who were able to resist the war propaganda.  The hawks in Washington believe that last month’s election gave them free rein to start more wars.  Now more than ever they must be challenged!

The Best Meal I Ever Had in Atlanta, GA

When you google search and only find opposition from Ron Paul, Alex Jones and Russian media, l wonder why bother with this comment.

They are Republicans. They are always planning for the next war. They have to justify cutting butter to buy guns.

Obama’s done a good job of helping them out though.

Did you not read the article? All but 5 Democrats voted for the resolution.

The planning I am referring to is the plan to get more money for defense contracts we don’t need. We are not about to go to war with Russia. They have nothing we want that would be worth fighting a nuclear power for. But if we can make people think we are, that means we need a hell of a lot more money for defense.

We are not going to war with Russia, but are we giving our allies confidence that we will meet out treaty obligations? Many military expenditures are made in the hope they will prevent war by discouraging any enemy.

The sanctions against Russia and support of Ukraine is an effort to raise the price for Russia’s provocative actions. They have been engaged in air force incursions of NATO airspace and a submarine off of Sweden’s coast. If Russia believes that they can act with impunity, then their next target will be the Baltic states. They are testing us. Follow Paul’s policies and Russia would interpret it as a green light and our allies would knuckle under to Russian intimidation. It’s not just Ukraine and Syria. Putin has made his ambitions very clear to restore Russian hegemony in eastern Europe.

Where’s the Lowe’s Bowl? Or the two uninvited teams are whack UAB is high and dry, better teams never played a game.

Women are better looking when you post an a** by their face.

Warn them in authority over you do the right thing.