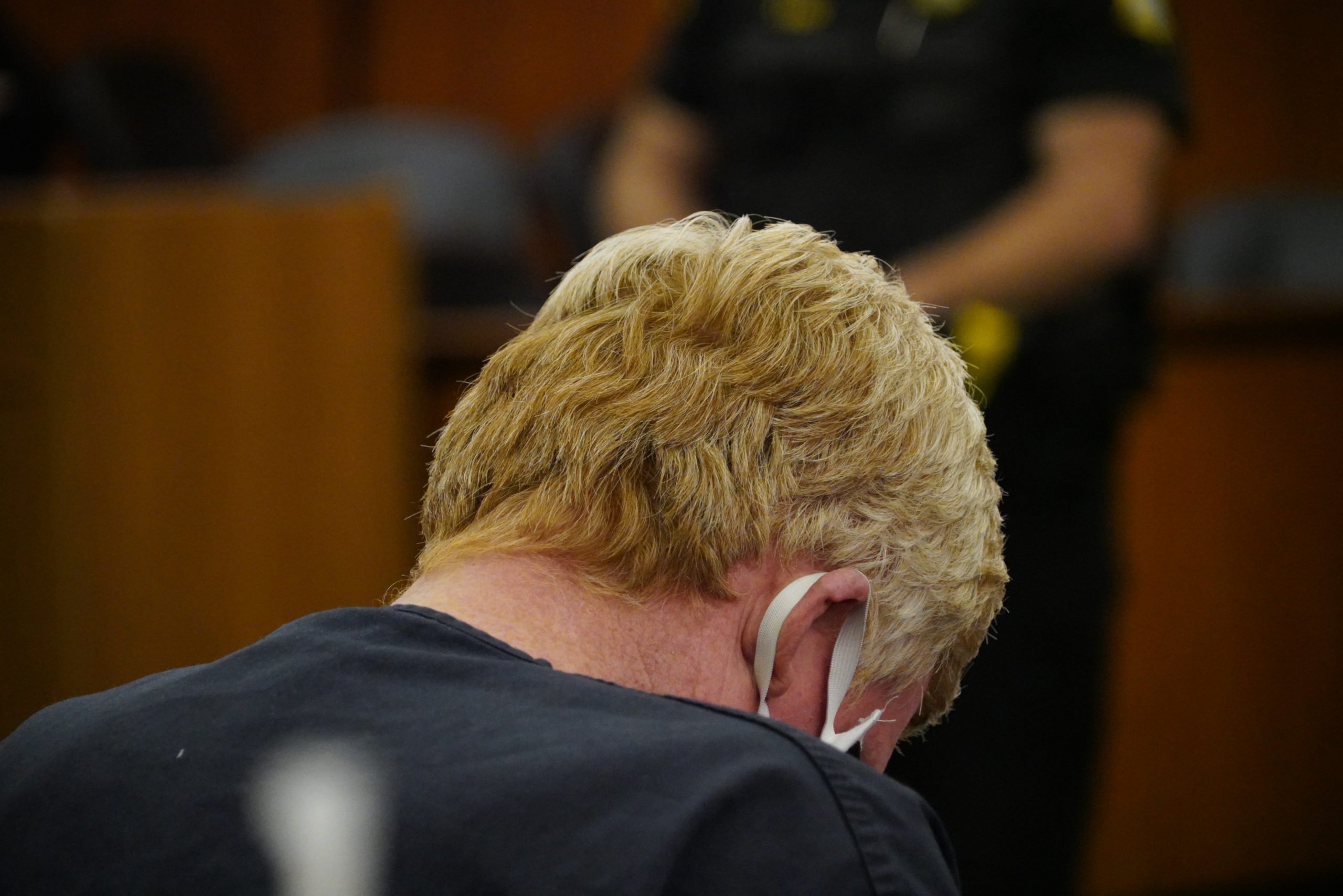 The shooting incident – which sent this made-for-Hollywood Southern gothic drama careening off the rails – remains under investigation by SLED, although charges have already been filed against Murdaugh and his alleged co-conspirator, 61-year-old Curtis Edward “Eddie” Smith.

“They pulled over like they were gonna help me,” Murdaugh told a Hampton county dispatcher, referring to his ostensibly unknown assailant – whom he later described as “a white fella.”

However, suspicion of the scene on Old Salkehatchie Road near Varnville, S.C. was instantaneous – with one of the first witnesses to drive past Murdaugh on the side of the road telling dispatchers the incident looked like “a set-up.”

“We are on Salkehatchie Road and there is a male on the side of the road with blood all over him and he’s waving his hands,” the female witness told a dispatcher. “He’s fine – he looks fine but it kinda looks like a set-up so we didn’t stop.”

Talk about a prophetic assessment of the situation …

Smith is alleged to have been Murdaugh’s “personal drug dealer.” According to police, he conspired to shoot Murdaugh in the head so that the latter’s son – Buster Murdaugh – could collect on a $10 million life insurance policy. Apparently, Smith is a terrible shot – with his small caliber bullet only grazing Murdaugh’s head.

The extent of Murdaugh’s head injuries has been the focus of considerable debate since the shooting, and his calm demeanor during the 911 call is likely to further call into question claims made by his lawyers as to the severity of his wound – which investigators at SLED have consistently described as “superficial.”

Also of interest? Murdaugh waited until a minute into his 911 call to let the dispatcher know he had been shot …

Contrasting the harrowing 911 call placed by Murdaugh following the brutal double homicide of his wife and youngest son on June 7, 2021, his voice sounds calm and collected throughout these 911 calls. To recap: Murdaugh says he discovered the bodies of his wife, 52-year-old Maggie Murdaugh, and their son, 22-year-old Paul Murdaugh, on the family’s 1,700-acre hunting property in Colleton county.

SLED released the 911 calls relate to that incident in late July, one of the few bits of information the agency has made public related to its inquiry. Murdaugh remains a “person of interest” in connection with that ongoing double homicide investigation. He is also one of several members of his family under investigation by a statewide grand jury for allegedly obstructing justice in the aftermath of a 2019 boat crash in which his late son – while “grossly intoxicated” – stands accused of crashing his boat into the piling of a Beaufort county, S.C. bridge.

Murdaugh is also under investigation for allegedly embezzling more than $10 million from Peters, Murdaugh, Parker, Eltzroth and Detrick (PMPED) – the powerful law firm  his family founded in Hampton, S.C.

Additionally, he was denied bond earlier this week in connection with his alleged role in defrauding the family of his former housekeeper, Gloria Satterfield – who died in 2018 in a mysterious “slip and fall” at his Moselle home. Murdaugh is facing a pair of felony theft charges in connection with that case after he and others allegedly made off with millions of dollars from Satterfield’s wrongful death settlement.


SLED is conducting all of these investigations – with the office of S.C. attorney general Alan Wilson prosecuting all defendants. However, Murdaugh’s ethically challenged defense attorneys Dick Harpootlian and Jim Griffin have reportedly been negotiating in secret with federal prosecutors in the hopes of securing a better deal for their client.

While Murdaugh was beside himself in the Moselle 911 calls, in the calls released from the roadside shooting he sounds completely unperturbed. Additionally, he sounds like a man in complete possession of his faculties – a far cry from the discombobulated drug addict portrayed by Harpootlian.

“I’m on Salkehatchie Road,” Murdaugh calmly told a Hampton county dispatcher upon being connected. “I’m by the church.”

“I got a flat tire and I stopped and somebody stopped to help me and when I turned my back they tried to shoot me,” Murdaugh continued.

“Were you shot?” the dispatcher asked.

“You need EMS?” the dispatcher asked.

Asked where he was wounded, Murdaugh could not immediately say.

“Can you give me a description of the person that shot you – or shot at you?” the dispatcher asked.

“Yes ma’am, I mean,” Murdaugh responded. “It was uh … uh … it was a white fella … I’d say a fair amount younger than me. Really, really short hair.”

In other words, Murdaugh provided first responders with a description of an individual that did not match up with Smith – who is eight years older than him and has long hair.

Murdaugh then asked the dispatcher whether an ambulance was en route- but then proceeded to inform her he was being driven to the hospital by a good samaritan.

At this point, the call disconnects …

As he is being driven to the hospital – or rather to a rendezvous point with a privately run medical evacuation helicopter – Murdaugh calls 911 a second time to update them as to his situation.

“This young lady is driving me to the hospital,” Murdaugh told a second Hampton county dispatcher after he was connected.

As he waits for the dispatcher to respond, Murdaugh can be overheard telling the good samaritan he “had a flat tire” prior to being shot. He then repeats this lie to the dispatcher.

“Now they are taking me to the hospital,” Murdaugh said. “We are coming down Salkehatchie road to the Hampton hospital.”

Murdaugh speaks calmly, evenly and dispassionately throughout the second call – describing his location as well as the vehicle driven by the good samaritan.

“I’m having a hard time hearing you,” Murdaugh told the dispatcher at one point during the call.

A representative of the Murdaugh family was not immediately available to comment on the release of the recordings.

As for SLED, the agency declined to issue a comment in the aftermath of their release.

“It would be inappropriate to comment further while the investigation is ongoing,” agency spokesman Tommy Crosby told this news outlet.

As readers of this news outlet are well aware, it did not take long for the narrative advanced by Murdaugh – and his attorneys – to collapse.

For starters, the Mercedes-Benz SUV driven by the 53-year-old attorney was equipped with run-flat tires – immediately debunking the lynchpin of his lie. Murdaugh’s attorney Griffin further alleged that his client’s tire “appeared to have been slashed,” even though the knife allegedly used to inflict this damage was quickly linked to Murdaugh.

Things went downhill from there …

As I noted a month ago, “the subterfuge surrounding the events which preceded the roadside shooting (was) absolutely nothing compared to the blatant lies told in its aftermath.”

Following the shooting, Griffin went out of his way to dramatize the seriousness of Murdaugh’s head wound.

“To hear the defense attorney tell it, Murdaugh’s injury was something straight out of the Zapruder film,” I noted recently, referring to the famous footage of the 1963 assassination of president John F. Kennedy.

Specifically, Griffin claimed Murdaugh sustained “entry and exit wounds” from the bullet that struck him. He further claimed the projectile fractured his client’s skull, which resulted in hemorrhaging in his brain that left him temporarily blind. All of this information was first reported by The (Charleston, S.C.) Post and Courier.

“He’s very lucky to be alive,” Griffin told the Pulitzer-winning paper, referring to his client’s wounds as “significant.”

Dawn Staley’s Raise Should Be About Basketball, Not Politics