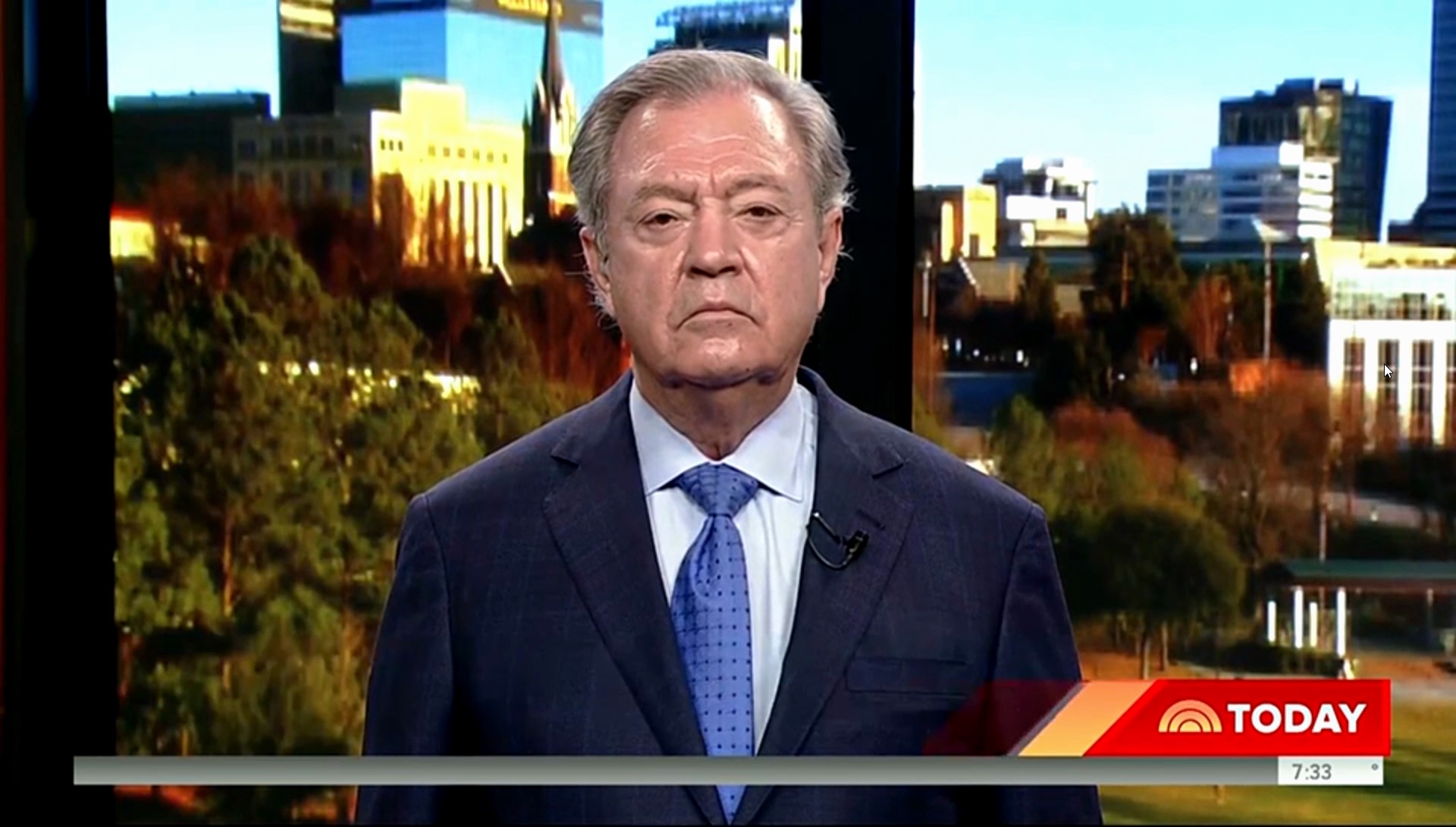 On the morning after the shocking news broke of Alex Murdaugh’s alleged attempted suicide-for-hire scheme, attorney Dick Harpootlian told the TODAY Show his client Alex Murdaugh will likely be arrested soon – but he does not believe he had anything to do with the recent murders of his wife Maggie Murdaugh and son Paul Murdaugh.

To recap, 61-year-old Curtis Edward “Eddie” Smith — described by sources close to the Murdaugh family as Alex’s “personal drug dealer” — was arrested Tuesday in connection with the mysterious September 4 shooting of Alex Murdaugh on a rural Hampton county road.

Smith is facing multiple charges including assisted suicide, assault and battery of a high and aggravated nature, pointing and presenting a firearm, insurance fraud and conspiracy to commit insurance fraud in connection with the shooting, according to a release from the S.C. State Law Enforcement Division (SLED).

Harpootlian told Craig Melvin on Wednesday he and fellow criminal defense attorney Jim Griffin — who has led a spin campaign on Alex Murdaugh’s behalf alleging that the 53-year-old lawyer was a targeted victim in the alleged shooting — travelled to an out-of-state rehab facility to speak with Murdaugh on Monday.

“It was the first conversation we’ve ever had with him where he wasn’t on opioids or oxy,” Harpootlian, a powerful South Carolina attorney who is also a state lawmaker, said on the TODAY Show. “As a result of that, he clearly knew what he did was wrong.”

Harpootlian claimed Murdaugh was trying to get off opioids on the morning of September 4, and decided to end his life as he “realized things were going to get very, very bad for him.”

“He called this guy to meet him on the side of the road and this fake car breakdown,” Harpootlian said. “Thirty minutes later, this guy shot him in the head.”

The extent of Alex Murdaugh’s injuries remain unclear. While Harpootlian claimed he had an entry and exit wound – and that Alex said he went temporarily blind – SLED has maintained Alex’s injuries were superficial.

Murdaugh was released from the hospital two days after the shooting.

Nine days after the shooting, Harpootlian said his client realized it was time to come clean with police.

“He didn’t want law enforcement to spend any more time on this fake crime instead of focusing on the murders of Maggie and Paul,” Harpootlian said of the shooting.

Harpootlian maintained Alex Murdaugh pursued the shooting/ suicide for hire scheme for his family, but he didn’t fully understand the suicide exclusion on the insurance policy.

When asked if Alex Murdaugh will be arrested soon, Harpootlian said yes — but not for the murders of Maggie and Paul.

“He did not murder them,” Harpootlian said.

Harpootlian claimed he and Griffin are independently investigating “some individuals who may have” murdered Maggie and Paul.

When asked why these supposed suspects would murder Maggie and Paul Murdaugh, Harpootlian said the motive would be “personal.”

Last week, an hour after FITSNews published its story about Murdaugh’s opioid addiction and issues at his law firm, a family spokesperson released a statement saying he was going into rehab and resigning from the firm started by his great grandfather —  Peters, Murdaugh, Parker, Eltzroth and Detrick (PMPED).

Later that day, officials of the firm claimed Murdaugh had been “pushed out” after misappropriating millions of dollars – and that he resigned on Friday, September 3, 2021.

During Wednesday’s interview, Dick Harpootlian admitted on national television that Alex Murdaugh used money from the law firm – and its clients – for personal use.

“It was uncovered that he had perhaps, not perhaps, he had converted some client and law firm money to his use and again spent most of that on opioids,” Harpootlian said.

Melvin pressed Harpootlian about his client’s alleged misappropriation, specifically Harpootlian’s claim that the “vast majority” of the millions Alex allegedly stole was used on drugs.

“Dick, that’s a lot of Oxy….” Melvin, who is also from South Carolina, said to Harpootlian.

The interview comes just hours after SLED released arrest warrants that pieced together some of the mystery in the September 4 shooting.

Murdaugh allegedly “provided Mr. Smith with a firearm and directed (him) to shoot him in the head for the purpose of causing Mr. Murdaugh’s death and allowing for the payment of a stated death benefit to a beneficiary of the insured.”

“Mr. Smith followed Mr. Murdaugh to Old Salkehatchie Road and shot Mr. Murdaugh as he stood in the roadway,” one of the probable cause affidavits noted. “After shooting Mr. Murdaugh in the head, Mr. Smith drove to an unknown location where he disposed of the firearm. Mr. Murdaugh survived the shooting and was transported to the hospital for treatment.”

Murdaugh “admitted to the scheme of having Mr. Smith murder him for the purpose of his son collecting a life insurance policy valued at approximately $10 million,” according to a probable cause affidavit accompanying one of the warrants for Smith’s arrest.

On Wednesday morning, a Colleton County judge set Smith’s bond at $5,000 for the drug charges. He will be extradited to Hampton County where he will be arraigned on the charges related to the shooting and insurance scheme.

As for Murdaugh, he remains a ‘person of interest’ in connection with a double homicide that killed his son, 22-year-old Paul Murdaugh, and his wife – 52-year-old Maggie Murdaugh – on June 7, 2021 at the family’s hunting property in Colleton county.

In a statement issued to media Wednesday, Harpootlian and Griffin blamed “people feeding” into Alex’s addiction for the last twenty years.

“During that time, these individuals took advantage of his addiction and his ability to pay substantial funds for illegal drugs,” the statement said. “Alex is not without fault but he is just one of many whose life has been devastated by opioid addiction.”

Days after the June double homicide, FITSNews published a bombshell story about the three mysterious deaths — Stephen Smith, Mallory Beach and Gloria Satterfield — that have been linked to the Murdaugh family.

On June 22, FITSNews exclusively reported that South Carolina Law Enforcement Division (SLED) opened an investigation into the death of Stephen Smith — a Hampton County teenager whose death has been unsolved since 2015.

SLED opened the investigation “based on information gathered during the course of the double homicide investigation of Maggie and Paul Murdaugh,” SLED spokesperson Tommy Crosby told FITSNews.

On Wednesday, Stephen’s Smith’s mother Sandy Smith — who has waited more than six years for justice in her son’s case — issued a statement confirming that her family was not related to Eddie Smith, the man arrested Wednesday.

“For the record my children nor I are related to any Smiths in the state of South Carolina,” she said. “Our Smith name comes from Miami Florida. Some of you people are crazy for even asking me that. We want justice not vengeance.”

SLED has not provided any updates on Stephen’s case since they opened the investigation in June.

Alex Murdaugh was a volunteer solicitor who reportedly carried a badge issued by the 14th judicial circuit solicitor (South Carolina’s version of a district attorney) at the time of the crash.

On Tuesday, FITSNews exclusively reported that the sons of former Murdaugh family housekeeper Gloria Satterfield — who died suspiciously in 2018 following an alleged “trip and fall” incident at a home owned by the family — say they have received no money from the $500,000 settlement they reached with Alex Murdaugh three years ago, according to the sons’ attorney.

Eric Bland, an attorney representing Satterfield’s sons Brian Harriott and Tony Satterfield, told FITSNews he sent a notice of representation to attorney Cory Fleming last week to get “truth and answers” for his clients.

“We’re not saying that anything has been done wrong,” Bland told FITSNews. “We just need answers for these two boys — one of them who has special needs — and the answers should be very clear.”

The 2019 boat crash thrust the Murdaugh family into a regional spotlight. While the powerful family was well-known in the legal and political scene of the Palmetto State, they weren’t making headlines before the fatal boat crash that killed Mallory.

Last week, the attorney representing Beach’s family in a wrongful death lawsuit filed a notice to secure Alex Murdaugh’s personal property when a judgement is issued in the ongoing civil lawsuit.

While the criminal investigation of Paul Murdaugh ended with his death, authorities are now looking into obstruction of justice allegations involving his prominent family members including Alex Murdaugh, according to FITSNews sources and attorneys representing boat crash survivors.