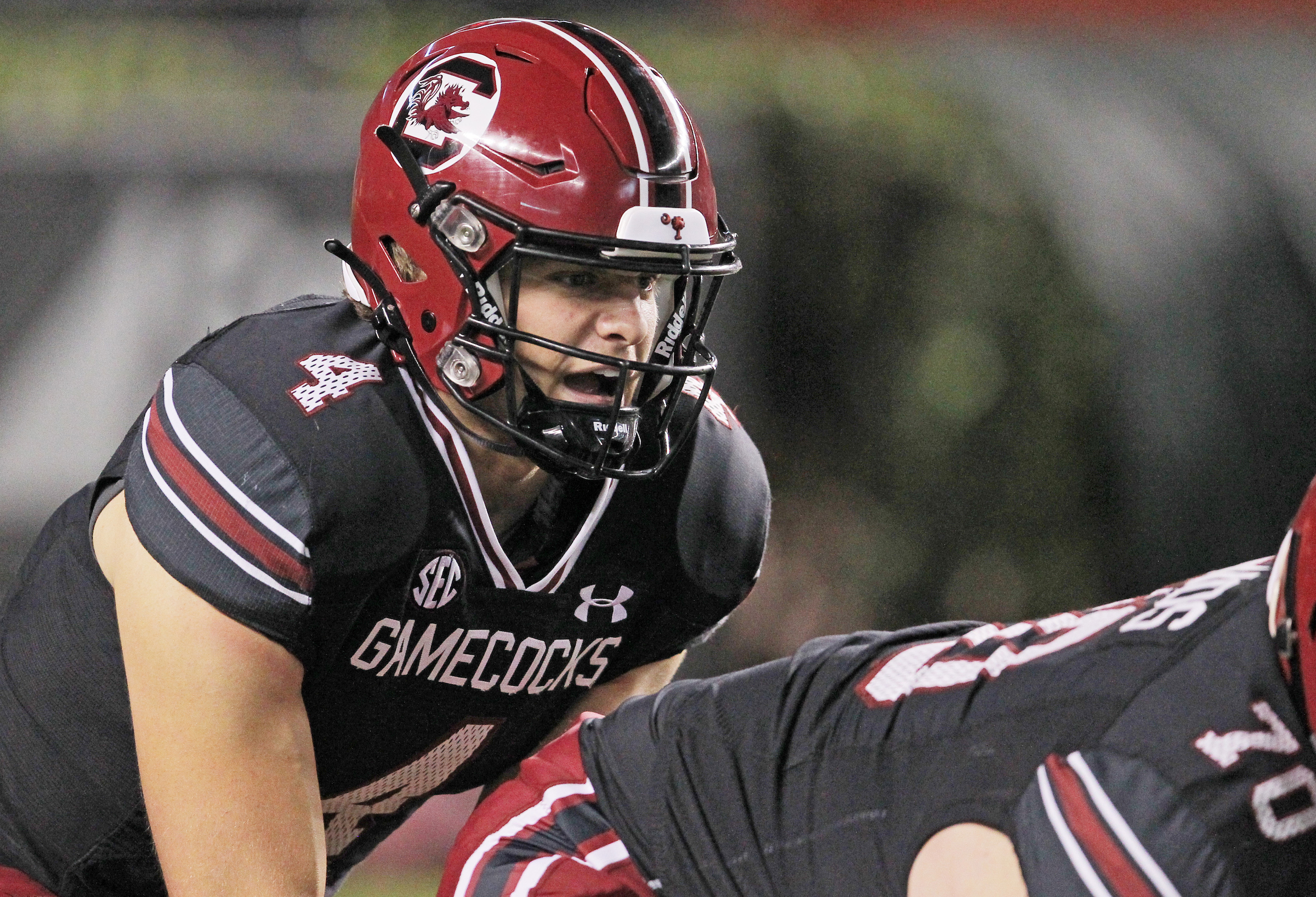 The University of South Carolina has been doing its best imitation of a drunken goat rodeo for several years now, culminating with the recent resignation of the school’s former president, Robert Caslen. Late last week, the embattled trustees of this beleaguered “flagship” institution of higher learning convened to assess the fallout from Caslen’s unceremonious departure in the wake of multiple allegations of plagiarism.

The verdict? More shadiness … and secrecy.

Oh, the latest board meeting also formalized the reinstallation of the school’s past president Harris Pastides – who left behind a legacy of soaring tuition increases, skyrocketing debt, rabid political correctness and out-of-control spending on non-core functions of government (including a spectacularly failed “economic development” scheme that set taxpayers back by tens of millions of dollars).

Seriously … this is the best the school could do?

If you think this spring’s drama has been a debacle, though, just wait. Gamecock football is only three months away – which means we get a refresher on the backsliding athletics accompanying South Carolina’s stagnant academics.

The Tigers have won six straight, incidentally, and would have easily made it seven in a row last November had the rivalry been allowed to continue …

Even after ditching a pair of ranked non-conference opponents (Clemson and Coastal Carolina), South Carolina finished the 2020 season with an atrocious 2-8 record – its worst mark since 1999 when former head coach Lou Holtz’s first squad went 0-11. Former head coach Will Muschamp was fired on November 15 – finishing his underwhelming career at the school with a 28-30 overall record (including a 17-22 conference mark, a 3-15 record against ranked opponents and a 1-2 record in bowl games).

Saddled with a massive buyout of Muschamp (courtesy of athletics director Ray Tanner), the Gamecocks had little money to spend on his replacement.

Enter first-year head coach Shane Beamer, whose five-year, $13.75 million deal to coach the program – his first-ever head coaching gig – was actually worth less than the money the school owed Muschamp (or at least it was until Muschamp agreed to accept a lump sum buyout valued at $12.9 million).

Again … this is the best the school could do?

Not only has Beamer never been a head football coach, he has never been an offensive or defensive coordinator at a major college program. His most recent stint was as an offensive assistant at Oklahoma under Lincoln Riley. Prior to that he coached tight ends and special teams at Georgia under Kirby Smart for two seasons.

Riley and Smart, incidentally, were two coaches Tanner had a shot at hiring during his first head coaching search five years ago.


Am I saying Beamer is a bad hire? No.  As I have previously noted his hiring is “terrible on paper,”  but the 44-year-old Charleston, S.C. native does have “a strong reputation as a recruiter and motivator of talent” – including four years spent in Columbia, S.C. as an assistant on the staff of former head coach Steve Spurrier. Also, coaching is obviously in his blood given the success of his father, longtime Virginia Tech head coach Frank Beamer.

The odds are just not in his favor …

Beamer certainly has tools to work with – especially on the offensive side of the football. Tailback Kevin Harris is a preseason first-team All-SEC performer who rushed for 1,138 yards and 15 touchdowns in ten games last year. The 5-foot-10, 225-pound stud tailback from Hinesville, Georgia will be accompanied this year by redshirt freshman MarShawn Lloyd – a heralded prospect from Delaware who missed all of last season (and spring drills this year) after tearing his anterior cruciate ligament (ACL) on the second day of fall practice a year ago.

Is that good news, though? While this group gets a lot of credit for Harris’ huge year, their numbers were not nearly as impressive as advertised – and their pass protection was downright atrocious.

Speaking of the passing game, South Carolina ranked next-to-last in the SEC in throwing yards per game (187.2) in 2020 and is returning only one signal-caller this year with any game experience – sophomore Luke Doty from Myrtle Beach. While Doty – a dual-threat quarterback who started two games last year – figures to get the nod under center, he will be pressed by FCS transfer Jason Brown and true freshman Colton Gauthier.

In fact some believe Brown – a 6-foot-3, 235-pound redshirt senior from Fredericksburg, Virginia – could wind up winning the job in fall camp over Doty. Which is sad considering he’s a transfer from … St. Francis?

Can any of these would-be starters find success throwing against SEC defenses? Especially if the pass blocking up front is as bad as it was a year ago?

That leads to another key question: Who is going to catch the football in the event first-year offensive coordinator Marcus Satterfield is able to identify a signal-caller he can work with and give that quarterback time to deliver the ball downfield?

South Carolina lost last year’s leading wide receiver Shi Smith to the Carolina Panthers of the National Football League (NFL), and the ranks of flankers behind him are thin. Big things are expected of junior Xavier Legette and senior Jalen Brooks, while senior OrTre Smith – who is still trying to bounce back from a 2018 knee surgery – is purportedly healthy after opting out of the 2020 campaign.


Defensively, new coordinator Clayton White is switching South Carolina to a 4-2-5 defensive alignment in the hopes of improving on 2020’s results – which saw the Gamecocks give up 36 points and 451 yards per game (both of which ranked No. 105 out of 127 FBS programs).

Whatever alignment he uses, White will have a lot of holes to fill. The Gamecocks lost two top defensive backs to the NFL draft – No. 8 overall pick Jaycee Horn and sixth-round pick Israel Mukuamu. They also lost linebacker Ernest Jones, the Rams’ third round pick, who paced the team a year ago with 86 tackles.

These are huge holes to fill in the defensive backfield … and South Carolina has only a handful of experienced players (including sophomore Cam Smith, junior Jaylin Dickerson and seniors Jaylan Foster and R.J. Roderick) available to fill them.

Redshirt senior Sherrod Greene and sophomore Mohamed Kaba have the potential to be every bit as good as Jones at the linebacker position, but the new alignment will put tremendous pressure on them.

On the defensive front, South Carolina’s line is anchored by first-team All-SEC selection Kingsley “JJ” Enagbare, who recorded six sacks and three forced fumbles in 2020. The 6-foot-4, 260 pound edge rusher from Atlanta, Georgia will be joined by former five-star recruits Zacch Pickens and Jordan Burch – two players who will need to show marked improvements this fall if the Gamecocks hope to have a prayer at a winning record. Redshirt senior Jordan Strachan (pronounced STRAHN) – a Georgia State transfer who recorded 10.5 sacks a year ago – gives first-year defensive line coach Jimmy Lindsey another potentially explosive edge rusher to match Enagbare.

Make no mistake: There is plenty of talent at South Carolina – even after losing so many players to the draft or the transfer portal. Recruiting was never Muschamp’s problem, it was developing talent and finding the right schemes in which to place players.

With Satterfield and White poised to completely revamp the Gamecocks’ schemes on both sides of the football, the learning curve in Columbia is going to be steep – and that’s just the X’s and O’s. Let’s not forget the acclimatization process associated with an entirely new staff working under a first-time head coach.

Everything could fall into place … but it’s more likely that it doesn’t.

The other problem facing Beamer? A positively brutal schedule. Four of the Gamecocks 2020 opponents – No. 3 Georgia (September 18 in Athens), No. 4 Clemson (November 27 in Columbia), No. 7 Texas A&M (October 23 in College Station) and No. 17 Florida (November 6 in Columbia) – were in the top 20 of the post-spring ESPN power rankings.

Assuming the Gamecocks drop all four of those contests, that means Beamer’s team would need to win six of its remaining eight contests just to break even.

Road games against Tennessee (October 9) and Missouri (November 13) will be particularly challenging in that effort, as will a home data against Auburn (November 20).

Bottom line? Expectations are understandably quite low for Beamer’s inaugural season at the helm of the Gamecock program – as they should be – but given the talent that remains on this roster (led by Harris and Enagbare) there is no reason to think a .500 season is out of the question. I wouldn’t bet on it, but it is not out of the question.

The real question? Whether Beamer and his staff do sufficiently well developing the talent they have on hand this season to begin the long and arduous process of returning this program to a competitive footing when it comes to recruiting. Because that is what is required for sustained success, and it has been missing in Columbia for some time now.

UPDATE: Looks like one Gamecock fan is not happy with this column …