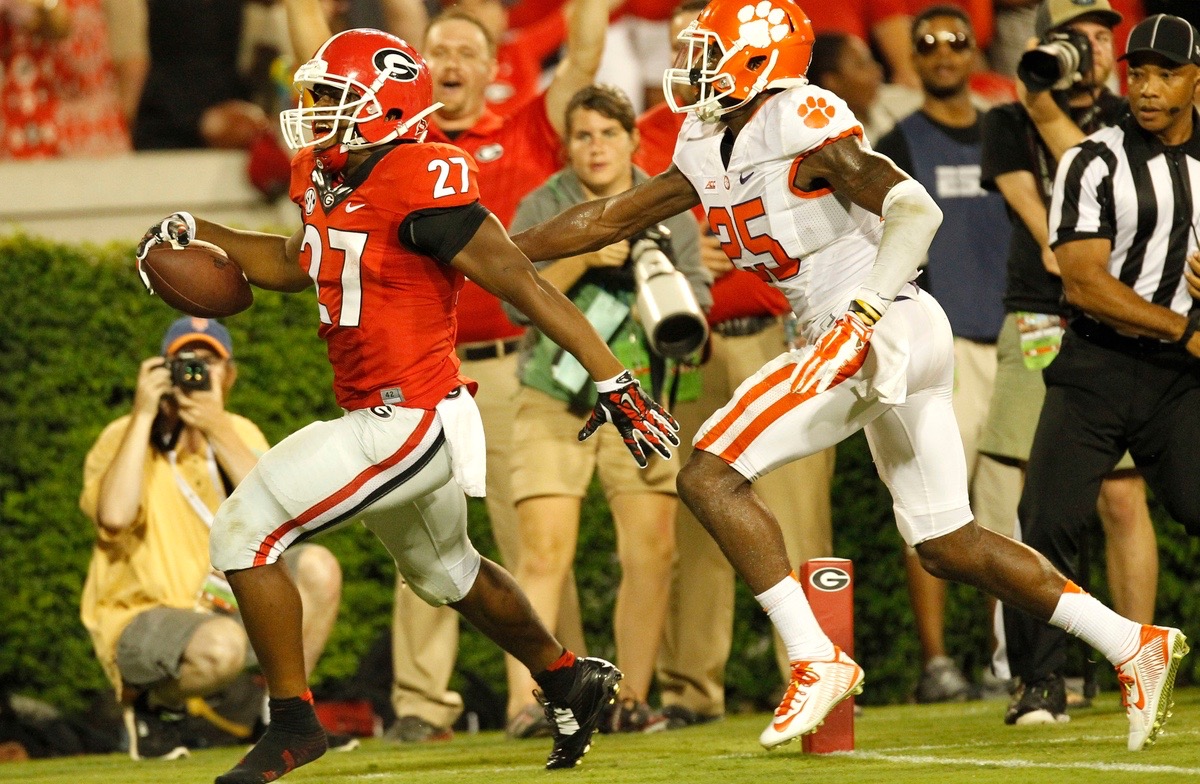 HE WAS GETTING “A MAJOR AWARD …”

|| By FITSNEWS || From 2010-12, University of Georgia football fans had to sit back and watch one of the most talented running backs in America run roughshod over their defense.  South Carolina’s Marcus Lattimore abused the Dawgs “D,” amassing 467 yards in three games against Georgia.

In fact the Gamecocks’ 2012 win over the Bulldogs marked the high-water mark of the program under head coach Steve Spurrier.

In 2013, Georgia returned the favor – with Todd Gurley ripping off 132 of the Bulldogs 227 rushing yards against the Gamecocks, giving the school its first win in the series since 2009.  Last year Gurley rushed for 131 of Georgia’s 221 yards on the ground – yet head coach Mark Richt inexplicably denied him the rock when the Bulldogs had the football first-and-goal from the South Carolina four-yard-line late in the fourth quarter.

That decision wound up costing Georgia the game …

Entering this year’s contest, the Bulldogs are expected to exploit another decisive advantage on the ground.

We’re referring of course to Nick Chubb – who ran for more than 1,500 yards a year ago as a freshman while Gurley dealt with eligibility issues (and later a torn anterior cruciate ligament).

The 5-foot-10, 220-pound sophomore tailback hasn’t missed a beat in 2015 – gashing Louisiana-Monroe’s defense for 120 yards during the Bulldogs’ season opener and putting up another 189 yards against Vanderbilt last week.

Will he shred South Carolina similarly?

We’ll have to see … but Chubb did plenty of damage to the Gamecock program this week when he revealed an anecdote from the recruiting trail.

According to Chubb, he paid a second recruiting visit to South Carolina in the summer of 2013 with the expressed intention of meeting the Head Ball Coach (apparently the two missed each other during Chubb’s first visit). In fact Chubb pushed back his pending commitment to Georgia so he could visit Columbia, S.C.

“I think he was getting some kind of award at Florida,” Chubb said, referring to the “Great Floridian Award” bestowed upon Spurrier that year by Sunshine State governor Rick Scott.

Wow … did that honor come with a leg lamp?

Anyway, while Chubb said he still “probably would’ve come to Georgia,” Spurrier’s lack of availability clearly made an impression on the talented young tailback.

“I would’ve got to meet the head coach,” he told reporters. “That would’ve been great to know who I was gonna play for.”

After a rocky first five years in Columbia, S.C., Spurrier led the Gamecock program to unprecedented heights from 2010-13.

Spurrier entered 2014 cockier than ever – but his team limped to a 7-6 record (and then suffered through a disastrous offseason).

A big part of the problem?  The Gamecocks have been getting out-recruited in recent years – especially by in-state rival Clemson.  And a big part of that was concern over Spurrier’s future at the school.

Spurrier now says he’s committed to coaching for at least five more seasons, but what good is that if he’s off getting awards from politicians rather than recruiting blue chip talent?

This website got crazy critical of Spurrier back in 2010 – and he responded by serving us (and all of his critics) a nice, tall glass of STFU.  So we’ve learned to be more measured in our criticism.

But there’s no denying Chubb’s comments are damaging to the South Carolina program … giving the impression Spurrier is not committed to going the extra mile to land top talent.

I can’t blame Spurrier. There is no need to waist time am money where there is no future. You, just don’t draw yo onside straights.

That is “waste” and to. Why do damn hard to correct anything on the board?

Spurrier’s attitude is “shit I get paid the same whether I win or lose, I’ve only got so many good golf games left.”

Well, I don’t know about all this but what I can say is that Vegas is being way to generous giving Ga. a 17 point advantage. Bad as the dirt peckers may be…I find it hard to believe they’ll lose by 17+ to Ga. even in Athens.

I’m surprised Spurrier did not take more interest in Chubb, as Chubb is the kind of old-school, Earl-Campbell back who simply runs over people. USC’s loss is Georgia’s gain.

He didn’t respond to this website by winning. Narcissistic much?

I don’t doubt his story, but there’s still no good reason to be a bulldog.

The high water mark for the program was defeating No. 1 ranked Alabama in Williams Brice with Garcia leading the charge. For the love of God man!

Chubb has made up his mind and Spurrier was well informed. No story here either.

grasping for straws….. in our pathetic attempt to write sports related stories. STFH FITS u POS. Please let me see u in Clarke County… I promise u will be writing another story about how Mike traveled from Charleston to Athens and beat my ass!!!!!!!