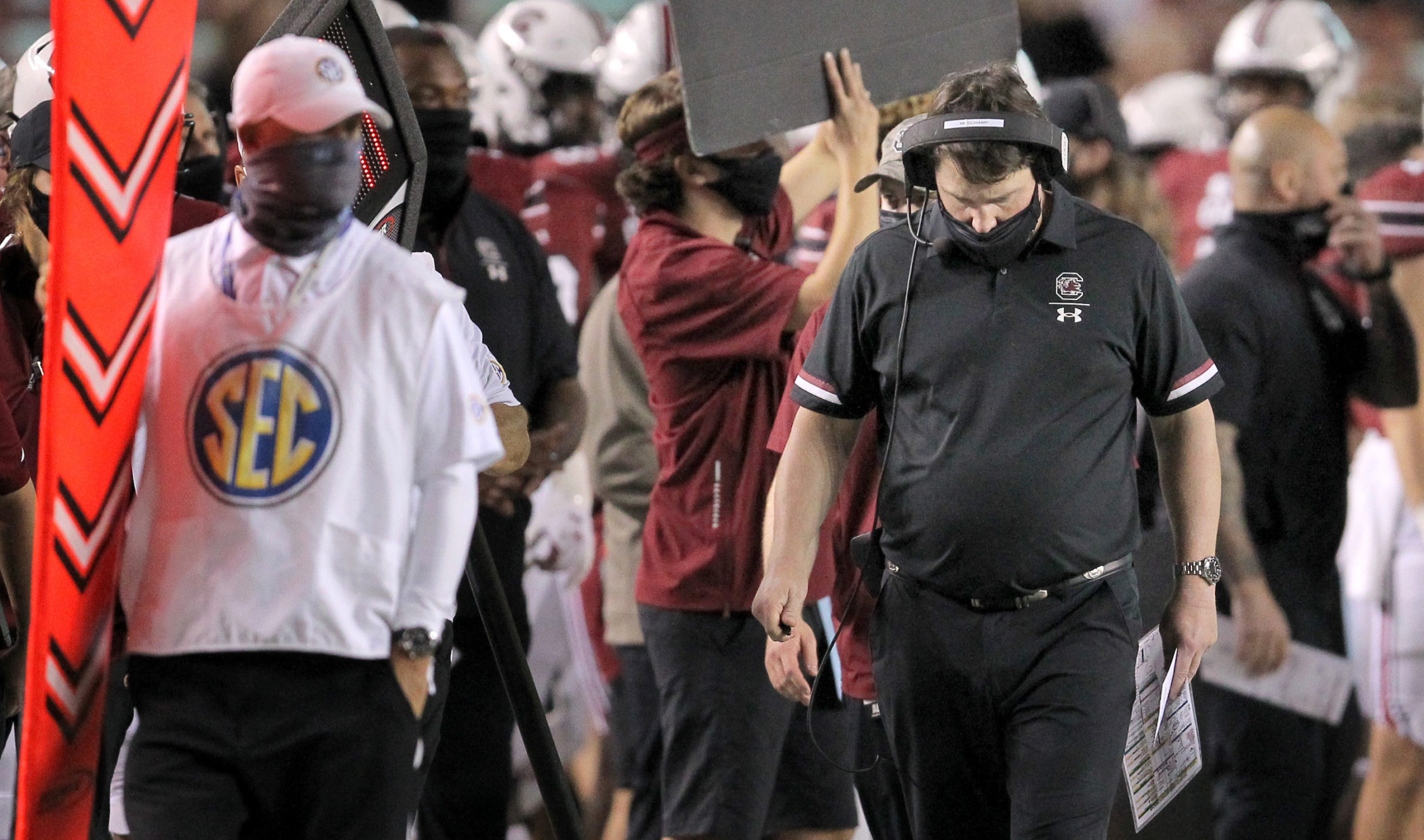 University of South Carolina head football coach Will Muschamp has been relieved of his duties “effective immediately,” the school announced on Sunday evening. Unfortunately for Gamecock fans, athletics director Ray Tanner – who hired Muschamp in 2015 and gave him an unwarranted raise and contract extension after 2018’s underwhelming 7-6 campaign – remains on the job.

Not only that, Tanner appears to have been empowered by the school’s president and trustees with the task of replacing the 49-year-old Rome, Georgia native – who is owed more than $13.7 million as part of the controversial buyout clause of his contract.

Sources told us last weekend that the massive buyout was prohibitive to firing Muschamp again this season, but as we reported earlier today that thinking changed abruptly after the Gamecocks were gashed for 708 yards and 59 points by the 2-4 Ole Miss Rebels on Saturday night.

“Rich donors have ponied up,” a source close to the program told us, adding that while the cost of Muschamp’s buyout was indeed “steep,” it could potentially pale in comparison to the costs associated with keeping him around into 2021.

“If they don’t (fire him), things money-wise next year could be scary,” the source told us.

First-year offensive coordinator Mike Bobo – who has struggled with play-calling consistency during his first seven games at South Carolina – takes over as interim head coach for the final three games of the season.

Bobo (above) posted a 28-35 record during five seasons at Colorado State University from 2015-2019. The Rams fired him after he went 7-17 during his final two seasons in Fort Collins, Colorado.

South Carolina’s offense ranks 10th in the Southeastern Conference with 370 yards per game and eighth in scoring with 27.3 points per game so far this season.

As it did in 2015 (when former head coach Steve Spurrier flamed out at midseason), South Carolina will have a head start when it comes to identifying the best available coaching talent – although that clearly did not help Tanner find the right man for the job the last go-round.

“After a thorough assessment of our football program, we have decided to make a change with the head football coach,” Tanner said in a statement. “I appreciate all that Will Muschamp has done for our program and wish him and his family the best moving forward. I believe our program will be well served by Coach Bobo as the interim head coach as we search for a new leader for Gamecock Football.”


According to the statement, University president Bob Caslen and Tanner “met with the coaching staff and student-athletes on Sunday to inform them of the change.”

“I appreciate everything Coach Muschamp has done for our University,” Caslen said. “He is a true professional and strong advocate for our student-athletes. Under his leadership, our football players excelled in the classroom and served as mentors in the community. Will also brought much-needed stability to the program. However, I believe it is time to move in a different direction.”

A search for a new head football coach will begin immediately, the school said.

“We will begin a search immediately to find the best head coach for Carolina football,” Tanner said. “We have great facilities, a passionate fan base, a University that is committed to excellence in football and a support system that is second to none in developing student-athletes. We will be looking for someone with the energy, commitment and organizational skills that can move our program to a championship level.”

Shockingly, Caslen made it unambiguously clear that he supports Tanner to lead the search for a new coach.

“Our search for a new head football coach begins today, and I have every confidence that Coach Tanner will find the right person to lead our program,” Caslen said in a statement. “A vibrant athletics program is integral to the college experience. I know how much football means to our students, faculty, alumni, and donors; I share that passion. Our priority remains winning a championship at the University of South Carolina.”

Caslen may have “every confidence” in Tanner, but he is in the decided minority when it comes to the Gamecock faithful – many of whom were shocked to discover Tanner did not also lose his job on Sunday.

Clearly, the university’s politically appointed board still supports Tanner despite the precipitous backsliding of the athletics department since the former baseball coach took over from Eric Hyman in July, 2012.

And as we noted in our previous report, there is doubtful to be any accountability when it comes to university board members – most of whom were overwhelmingly reelected to their plum political posts by members of the S.C. General Assembly just four days before the start of the 2020 season.

Muschamp went 28-30 in his four-and-a-half seasons at the helm of the Gamecock program – including a 17-22 conference mark, a 3-15 record against ranked opponents and a 1-2 record in bowl games. He was 0-4 against arch-rival Clemson.


As it did at Florida, Muschamp’s high-water mark at South Carolina came in his second season – when his team won nine games (including a thrilling come-from-behind victory over Michigan in the Outback Bowl).

The following season was a dud, though … punctuated by a shutout loss to Virginia in the 2018 Belk Bowl.

Last year, the wheels came off with a disastrous 4-8 campaign, but Muschamp held on to his job because the school couldn’t afford what at the time would have been an $18.6 million buyout.

As the losses piled up, Muschamp became more truculent with the media – offering familiar excuses about needing to “look at film” and constantly reiterating that his teams had won more games during his first three seasons at the helm than any other coach in school history.

This year, the regression of the program became painfully self-evident.

After upsetting then-No. 15 Auburn less than a month ago, Muschamp’s team has been eviscerated in three consecutive weeks … falling to LSU, Texas A&M and Ole Miss by a combined score of 159-79. South Carolina’s defense gave up a shocking 1,779 yards in those three contests.

Muschamp closed out his final two campaigns in Columbia, S.C. with a 6-13 record – including ten double-digit losses and seven losses by margins of twenty or more points.

Baseball Legend Darryl Strawberry Coming To The Midlands Next Week