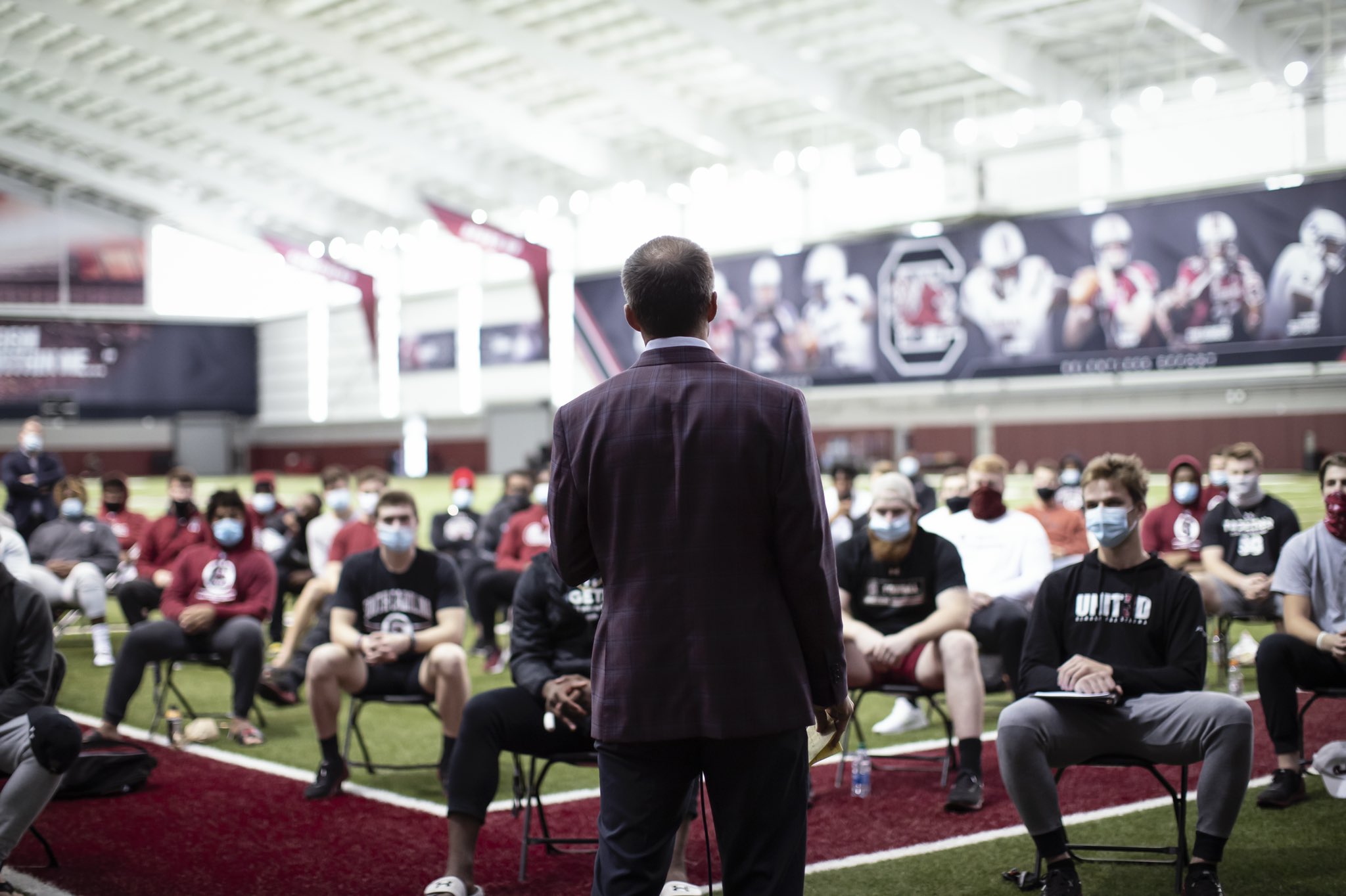 First of all, we need to reiterate that the University of South Carolina abjectly failed when it allowed eighth-year athletics director Ray Tanner to have anything to do with the search for its new head football coach.

Whether Tanner winds up selecting a miracle worker or another dud … there is no way he should have kept his job at South Carolina (let alone been entrusted with the task of righting a program that has achieved terminal velocity under his watch).

Tanner, of course, is responsible for bringing Will Muschamp to South Carolina despite the coach’s previous flameout at Florida. More egregiously, Tanner extended Muschamp’s contract (which included a massive buyout clause) despite middling returns.

Muschamp was relieved of his duties on November 15, 2020 after posting a 28-30 record in four-and-a-half seasons at the helm of the once-proud Gamecock program. He went 17-22 against conference opponents, 3-15 against ranked opponents, 1-2 in bowl games and 0-4 against arch-rival Clemson.

Against top SEC East rivals, Muschamp was 1-3 against his alma mater Georgia and 1-4 against his former Florida team.

Muschamp’s Gamecocks lost thirteen of their last nineteen games – a stretch that included ten double-digit defeats and seven losses by margins of twenty or more points.


The program has endured three more losses under his hand-picked offensive coordinator, Mike Bobo – including a 41-18 blowout defeat at the hands of the Kentucky Wildcats on Saturday.

Like we said, terminal velocity … and it isn’t just football that is struggling since Tanner became athletics director.

Last week, we reported that Oklahoma University assistant coach Shane Beamer was the favorite to replace Muschamp as the Gamecocks’ head coach – and this week the school made it official.

“I believe that Shane Beamer is the perfect fit to be the head football coach at the University of South Carolina,” Tanner said in a statement announcing Beamer’s hiring. “He has worked under some of the greatest coaches in college football and has taken those lessons to become one of the bright, young minds in the game. I believe Shane’s energy, enthusiasm, commitment and fondness for our school and program will be met favorably by our student-athletes, staff and fans.”

According to Tanner, several other candidates were interviewed for the position but “Shane’s candidacy set the bar high as we were talking to other coaches.”

“I have been preparing for this moment my entire life,” Beamer said in accepting the job. “I am ready and excited to be the head football coach at the University of South Carolina. I am thankful to all the head coaches that I have worked for, the assistant coaches and student-athletes I have worked with. My family and I are thrilled to be coming back to Columbia and the state of South Carolina.”

Beamer, 43, is a native of Charleston, S.C. – having been born in the Palmetto State while his father, legendary former Virginia Tech coach Frank Beamer, was coaching at The Citadel.

As we noted a week ago, Beamer was an assistant at South Carolina from 2007-2010 under former head coach Steve Spurrier – coaching linebackers, defensive backs and special teams. Citing Beamer’s “proven record as a recruiter,” Spurrier tapped him as the Gamecocks’ recruiting coordinator in 2009 – and Beamer proceeded to help land some of the most heralded prospects in school history.

His success on the recruiting trail enabled the Gamecocks to embark on a run of three consecutive 11-win seasons from 2011-2013.

Of course, Beamer has never held a head coaching job – let alone one in a power five conference. In fact, he has never been an offensive or defensive coordinator.

“Asking him to take the reins of a Southeastern Conference school seems like a stretch to us,” we noted last week.


This is particularly true in light of some of the names that were interested in the South Carolina job – including Coastal Carolina head coach Jamey Chadwell and Louisiana head coach Billy Napier, the early frontrunner for the job.

In fact, Chadwell made his case for the position crystal clear on Saturday when his Chanticleers (10-0) defeated previously unbeaten No. 13 Brigham Young – propelling the team to No. 11 in the latest AP Top 25 poll, its highest ranking ever.

Coastal Carolina is in only its fifth season in the Football Bowl Subdivision (FBS), incidentally.

“Chadwell is Carolina’s best hope by a mile,” one of his backers told us.

Other names on the Gamecocks’ short list – including Liberty head coach Hugh Freeze – were apparently not interested in the South Carolina position. According to our sources, Freeze is holding out for the coaching position at Tennessee – which is expected to come open sooner rather than later as third-year head coach Jeremy Pruitt’s squad has posted an embarrassing 2-6 record (including six straight losses).

Back to Beamer, though …

While he has been embraced by former South Carolina players – and was approved by members of South Carolina’s politically appointed board of trustees – the fact remains that Beamer, like Muschamp five years ago, is a second tier hire.

Even worse, he is a second tier hire in a year that did not boast the same level of coaching talent South Carolina could have landed five years ago – when Beamer’s two most recent bosses (Kirby Smart and Lincoln Riley) were available.

Oh, and five years ago the South Carolina job was still viewed as one worth taking … not one you pass up to wait for better positions to become available.

Again, none of this is to say Beamer (pictured above during his first stint as a South Carolina assistant) won’t be successful as a head coach … perhaps even wildly so.

Certainly he has it in his genes … and in addition to that, he has worked under any number of successful head coaches (including two Tanner should have been able to nab the last time a vacancy came open at South Carolina).

Meanwhile, the Charlie Brownish Gamecock fan base – loyal to a fault – appears to be enthusiastically embracing his hiring. And South Carolina’s athletic facilities remain among the best in the SEC (as they should be, based on how much money has been spent beefing them up in recent years).

Finally, the Palmetto State typically churns out a steady stream of heralded high school football prospects – meaning Beamer is entering a target-rich environment for assembling the sort of talent needed to turn the program around (although it is worth noting Muschamp consistently recruited talented athletes, he just couldn’t do anything with them).

All of the ingredients for a successful program are there, in other words …

So … will Beamer become a success story like Dabo Swinney at Clemson? Or will he become another Brad Scott (for those of you who are old enough to remember that debacle)?

Or, more likely, will he land somewhere in the middle?

And assuming “somewhere in the middle” winds up being the answer, will that be enough for Gamecock fans who tasted sustained national success during the Spurrier era?