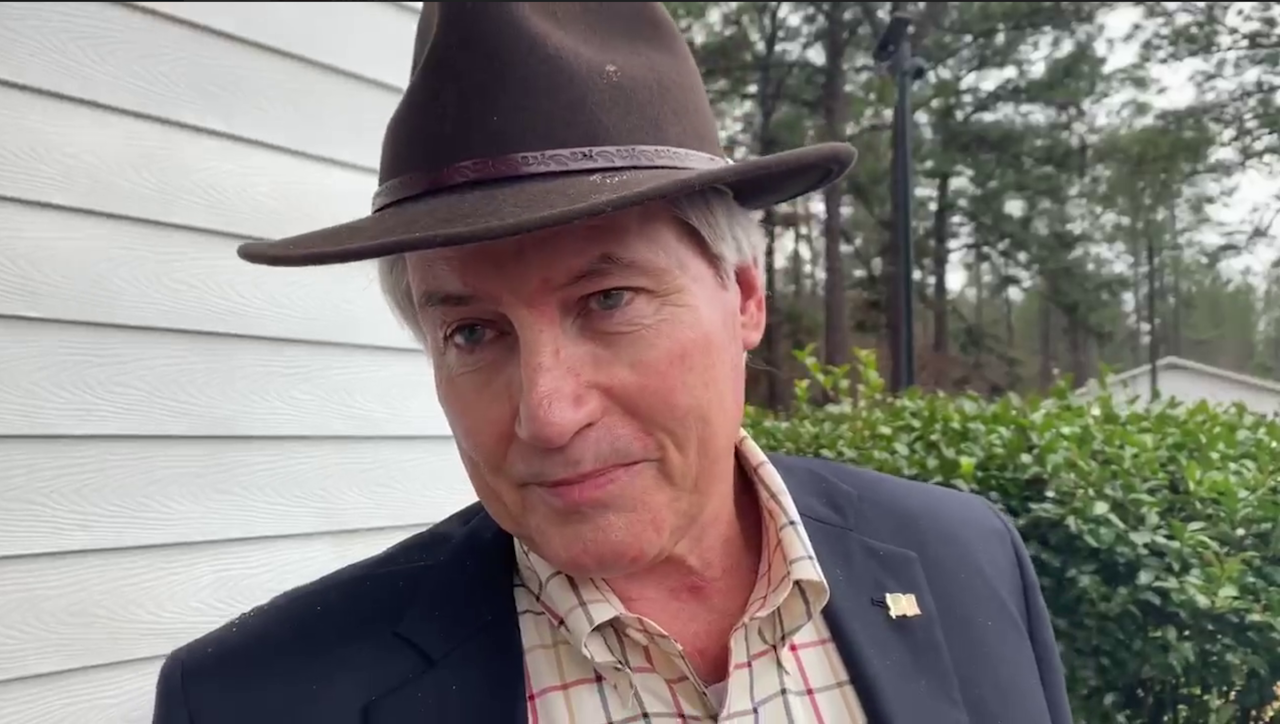 Attorney Lin Wood roused a crowd of conservatives in Oklahoma over the weekend with some jarring rhetoric about what he believes ought to be done to members of an alleged international cabal of child-trafficking satanists. The candidate for chairman of the South Carolina Republican party (SCCGOP) also embraced the QAnon movement – a shadowy group that has sought to counter increasingly leftist mainstream media coverage by peddling similarly untrustworthy right-wing conspiracy theories.

“Every lie will be revealed,” Wood thundered during his keynote address to attendees at the Health and Freedom Convention, held over the weekend at the Rhema Bible Training College in Broken Arrow, Oklahoma. “They are killing our children, send ’em to jail. Put ’em in front of the firing squad. They are committing acts against humanity. The penalty for an act against humanity is death. Take ’em out.”

Talk about straddling the line on speech … right?

“They’ve accused me of being a QAnon conspiracy theorist – why? Because they are telling you that I am a bad messenger,” Wood continued. “They’re trying to attack me because they can’t attack Q – because Q is the truth! This is about the children for God’s sakes!”

Wood proceeded to rattle off a list of politicians whom he believed should be furnished with a recording of his remarks, specifically singling out “the Clintons, the Obamas, the Bidens (and) the Bushes.”

“Send it to those people because they are involved in child sex trafficking,” Wood screamed.

Look, I have no quarrel with those who support capital punishment in certain child sex cases. In fact, I have previously endorsed much harsher methods of execution for individuals found guilty of especially heinous sexual offenses against children. But such punishments must be meted out in accordance with our criminal justice system – not a frenzy-whipped mob manipulated by an opportunistic ideologue who has offered precisely zero justification for his claims.

In other words, such judgments must based on credible evidence and grounded in due process – in keeping with the most fundamental strains of freedom’s moral code. They cannot be based on the delusional rantings of a glorified carnival barker/ wanna-be televangelist – which is sadly how Wood came off at the Oklahoma rally.

If Wood has credible evidence to support his Pizzagate claims, then my news outlet is all ears. Regular readers of this news outlet know I love a good conspiracy theory. Also, I can’t stand any of the political families he singled out in his diatribe – and would relish the thought of them being exposed.

But allegations – especially those of such a serious and salacious nature – require at least some proximity to credulity.

Unfortunately, Wood failed to produce much in the way of credulity last fall when he served as one of the attorneys for former U.S. president Donald Trump – who alleged that widespread voter fraud cost him the 2020 election.

Do I believe there was voter fraud? Yes. Do I believe it may have impacted the outcome of the race? Quite possibly. Do I believe America’s Fourth Estate engaged in a one-sided propaganda campaign aimed at discrediting these claims and anyone who espoused them? Absolutely.

But … do I believe that a cabal of child-eating satanists is running the country? No.

Wood is a lawyer … meaning he ought to have some conception of the burden of proof. Unless, of course, he has decided to abandon this concept completely as he morphs into a political doomsday prophet.

Prior to his work with Trump, Wood gained fame in the mid-1990s representing exonerated Centennial Olympic Park bombing suspect Richard Jewell and the parents of JonBenét Ramsey. Last month, my news outlet reported exclusively that the 68-year-old lawyer had moved to South Carolina – home of the 2024 “First in the South” presidential primary – to challenge SCGOP chairman Drew McKissick, a Trump do-boy who has been in the business of protecting fiscally liberal politicians of late.

Wood’s supporters have coalesced under the banner of MySCGOP.com – which is pushing for a “purge” of what it refers to as the “RINO establishment elite” in the Palmetto State. That’s a reference to “Republicans in Name Only” – or GOP candidates who campaign as conservatives but govern quite differently.

As I have often pointed out, there is no shortage of such politicians in South Carolina. And if the Palmetto State is ever going to reach its full potential on any number of fronts (economically, academically, etc.) then I absolutely concur that those who pay lip service to freedom and free markets should be purged … at the ballot box.

According to its website, MySCGOP.com is comprised of “like-minded patriotic and conservative groups (from) across South Carolina who want to drain the swamp in Columbia.”

With Wood at the head of its column, though, is this group really going to content itself with “swamp-draining?” Or is that just a prelude to the firing squads?

Wood’s Oklahoma speech is not the first time he has called for elected officials to stand in front of a battery of rifles. During the mob violence that rocked the U.S. capitol in January, Wood suggested former vice president Mike Pence was a traitor for certifying the 2020 Electoral College results and should be executed by firing squad. He has since called those statements “rhetorical and political hyperbole.”

While Trump has doubled down on his endorsement of McKissick – his loyal puppet – Wood nonetheless scored a huge victory last week at the Greenville county Republican convention. There, his MySCGOP.com army captured an overwhelming majority of delegates elected to represent the county at the state convention this spring.

According to my sources, Wood supporters have won “at least a third” of GOP delegates since the Greenville convention – meaning Wood’s candidacy for chairman of the party is eminently credible.

Count on my news outlet to continue following the battle for control of the SCGOP – as well as the broader rift within the national party.