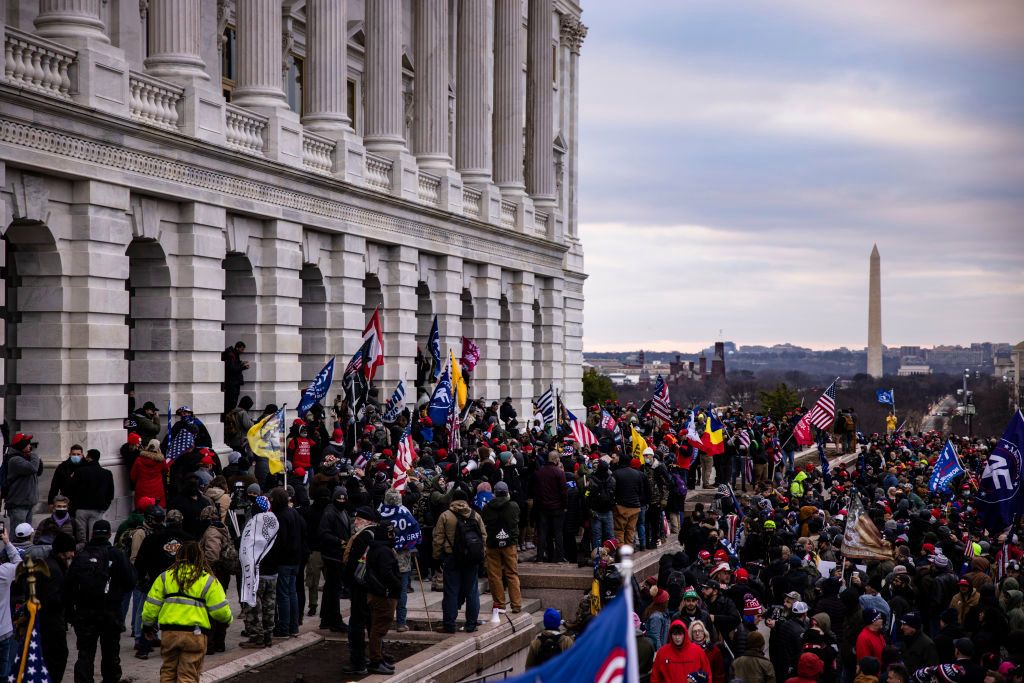 Crazy was in full bloom in the United States capital on Wednesday afternoon when protesters and rioters supporting U.S. president Donald Trump pushed through – or were alternatively allowed to pass through – barricades surrounding the U.S. capitol building during lawmakers’ attempt to certify disputed electoral votes from the 2020 election.

At least four people were killed and dozens more injured in the violent melee – which saw both chambers of the U.S. congress breached by demonstraters.

Windows were shattered, doors were smashed and property within the capital complex was vandalized and destroyed – but the real damage was to the psyche of the nation, which saw its citadel subjected to the sort of treatment one ordinarily sees reserved for the seats of third world nations.

“Photos and video of Americans storming our own capitol being broadcast all over the world to foreign enemies and even friends is a really, really bad look,” one of our readers noted.

Indeed. In fact, so synonymous is the name of “America” – and the imagery of its bastions – with these guiding principles that twenty years ago our enemies tried to destroy the U.S. capitol building in the hopes of undermining those freedoms. Of undermining “US.”

Were it not for the selfless bravery of a handful of passengers on United Flight 93 on the morning of September 11, 2001 – our capitol building would have been destroyed.


Those were patriots, people. Not the hoodlums who broke into federal legislative offices yesterday and mugged for selfies as they vandalized other people’s property – including taxpayer property.

And while America is obviously not doing very well lately when it comes to standing up for liberty, that does not give her citizens the right to resort to violence against other people … and it sure as hell does not give them the right to attack the house of We The People.

To be clear: We do not believe what transpired in Washington, D.C. yesterday constituted a credible coup attempt against our nation’s democratically elected government. Nor do we subscribe to the belief that Trump was seriously attempting to overturn the results of the 2020 election by force. Our guess is if the 45th president were really attempting a coup, things would have gone down much differently.

For starters, he probably wouldn’t have employed an army of shirtless, Viking-hat wearing yokels.

But that does not change the fact that the actions of this mob – whatever ideology may have motivated them to do what they did – were definitionally disgraceful, dangerous, immoral and extralegal.

Seriously, if you don’t want to be accused of participating in a coup then it’s probably not a good idea to storm the seat of your government.

For these and other reasons, we believe the protesters who became rioters yesterday are every bit as deserving of contempt (and consequences) as those who participated in the rash of racially charged violence that we called out last spring …

Do all of these people have valid grievances? Yes. Are they legitimately frustrated at what they believe to be pervasive institutional injustice and discrimination? Yes. Was an election stolen from some of them? Maybe.

But no one is addressing electoral fraud arguments anymore … which is what happens when a movement completely delegitimizes itself.

We defended the anger of those rioting last spring – just as we believe many of those who gathered in Washington, D.C. yesterday were filled with righteous indignation. “Legitimate beefs,” as it were. In fact, we think Black Lives Matter supporters and wearers of MAGA hats probably have much more in common than they could ever imagine.

After all, both are fighting a system which holds them down via division and destabilization … and both parties (and Trump) have stoked these divisions for their own opportunistic political purposes.

Seriously … is anyone surprised the wealth gap in this nation has exploded under both Trump and former president Barack Obama? Or that debt has soared and economic growth has stalled under both Democratic and “Republican” leadership?

No one wants to solve these problems, of course … because that would prevent them from being able to exploit them in perpetuity.

“Only a pawn in their game,” as Bob Dylan once sang.

But there is a lesson we are all supposed to learn when we are children: “It’s okay to be mad – it’s not okay to be violent.” The former is an expression of individual liberty. The latter is a violation of someone else’s liberty.

All of us have the right to peaceably assemble and petition the government for a redress of our grievances. But destroying property and putting other people’s lives in danger is not peaceably assembling – it is criminal conduct.

That is why this news outlet condemned the violence – and why we support efforts to hold those who perpetrated it accountable for their actions. We believe nothing short of a full, federal investigation is required – one that is motivated by finding the truth, not forwarding a narrative.

Over the past twenty-four hours, we have been criticized by those on the right for refusing to “stand strong for Trump” and “stop the steal.” Similarly, we have been accused by those on the left of enabling the violence in Washington, D.C. – purportedly because we have railed in the past against the radical policies and demonstrable hypocrisies of the far left.

The perils of independent thought, right?

Our bottom line? We are going to continue to call things as we see them, offering what we hope are common sense, consistent takes on the events of the day … no matter how crazy the days become.