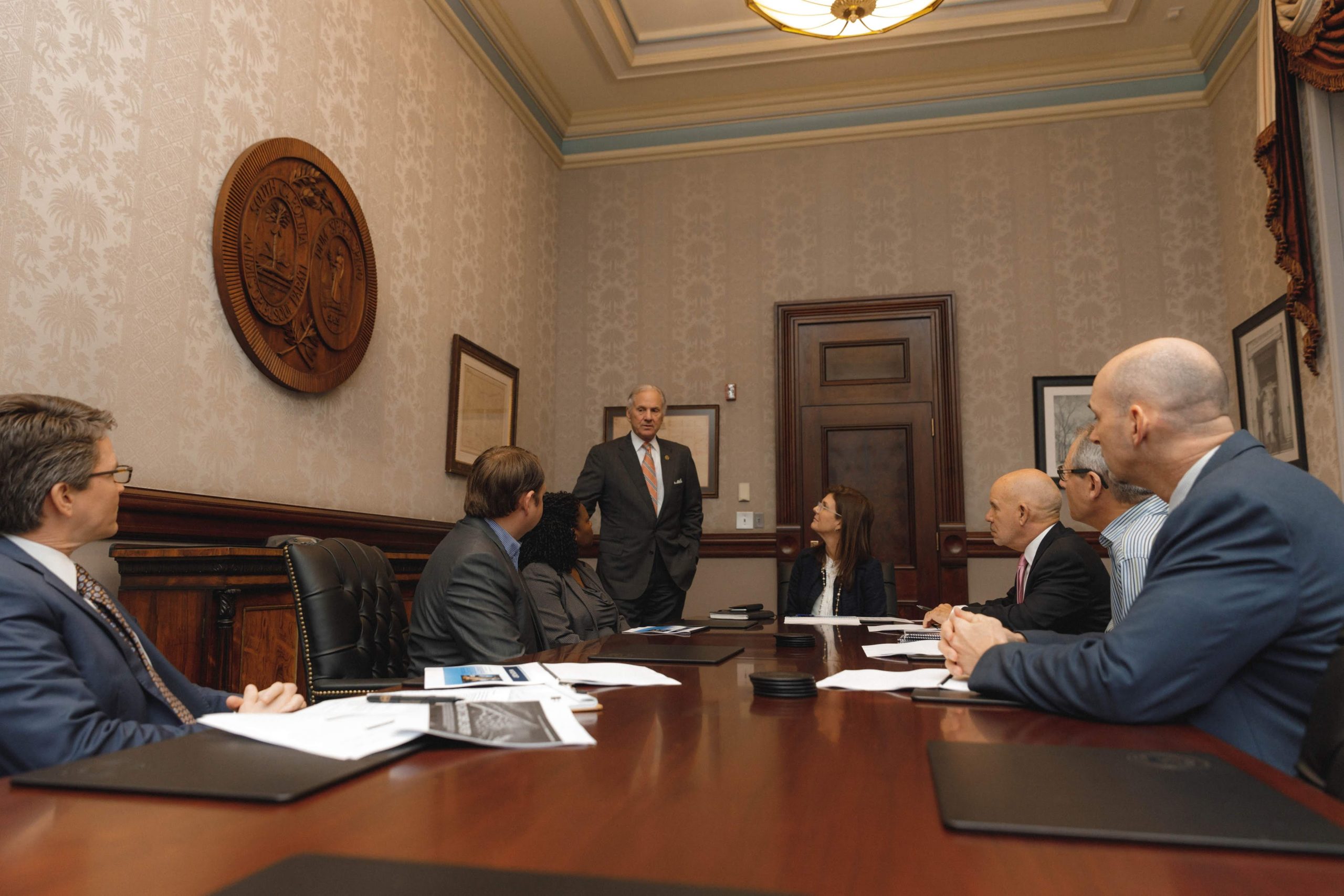 The administration of South Carolina governor Henry McMaster is taking a well-deserved beating after it spent $15 million (at least) to negotiate offers on the sale or management of failed government-run utility Santee Cooper – offers lawmakers in both chambers categorically rejected this week.

Now the S.C. General Assembly is once again taking the reins in this contentious, high-stakes debate … although we are no closer to achieving a satisfactory resolution for ratepayers and taxpayers than we were when this process began two-and-a-half years ago.

After a 2019 bidding process conducted by the S.C. General Assembly failed to accomplish anything regarding the disposition of South Carolina’s spectacularly failed, state-owned utility – lawmakers punted to McMaster, Specifically, they instructed his administration to negotiate the best sale offer and the best management proposal for Santee Cooper, which is billions of dollars in debt after its participation in NukeGate – a spectacularly failed attempt by the utility and its crony capitalist partner SCANA to build a pair of next-generation nuclear reactors at the V.C. Summer nuclear generating station in Jenkinsville, S.C.

The story is (painfully) familiar: Incentivized by state lawmakers, Santee Cooper and SCANA spent $10 billion on the construction of these reactors – which were supposed to be operational in 2016 and 2017, respectively.

Despite the massive cash outlay, the project was never finished – and Santee Cooper and SCANA couldn’t afford the estimated $10-16 billion price tag necessary to complete it. On July 31, 2017 Santee Cooper pulled the plug. Shortly thereafter, it was revealed executives at both utilities knew the project was doomed for years and didn’t warn the public.

NukeGate has prompted a flood of lawsuits (which has elevated Santee Cooper’s debt exposure even further) – not to mention a looming criminal investigation that is beginning to bear fruit.

Astoundingly, in the aftermath of the debacle Santee Cooper’s former chief executive got a $16 million golden parachute – and the utility is still paying salaries and criminal defense bills for numerous current and former executives.

Against this backdrop, McMaster’s administration spent months conducting negotiations with multiple entities regarding Santee Cooper – ultimately choosing a $9.6 billion proposal from Florida-based NextEra Energy as the best offer to purchase the utility. McMaster’s administration also selected a proposal from Virginia-based Dominion Energy – which purchased SCANA in December 2018 – as its preferred management agreement.

Meanwhile, Santee Cooper has been touting its own so-called “reform” plan – although this news outlet (and leading lawmakers) have expressed serious reservations about the credibility of its assumptions (and the “leaders” who are putting those assumptions forward).

Where does that leave us? Nowhere …

In rejecting the proposals advanced by the McMaster administration, House leaders have signaled their intention to reopen negotiations with NextEra in the hopes of cutting a better deal. Meanwhile, in its own rejection of the McMaster-approved proposals the more left-leaning S.C. Senate appears to be gravitating toward coming up with its own Santee Cooper reform plan – with liberal leader Hugh Leatherman telling confidants there are simply not enough votes in the chamber to approve a sale of the embattled utility.

Or to implement a management agreement.

This news outlet has argued for years that South Carolina should unload Santee Cooper. In fact we proposed doing so more than a dozen years ago – when such a sale could have netted billions for the state. Instead, lawmakers not only enabled its participation in NukeGate (plunging the utility nearly $8 billion in debt) but they socialized more than $2 billion of SCANA’s investment risk via the now-notorious 2007 “Base Load Review Act.”

The whole situation is a mess. But the blame for the current impasse falls squarely on the shoulders of McMaster, whose administration clearly failed to negotiate the most compelling offers for the legislature to consider. Neither NextEra nor Dominion can be blamed for that failure, either. Both companies spent months working with the McMaster administration in good faith (unlike Santee Cooper, which attempted to undercut the process at every turn).

In fact, McMaster’s failure is all-the-more inexcusable considering his administration sought extra time from lawmakers – ostensibly for the purpose of negotiating “better” deals.

Again, neither NextEra nor Dominion can be faulted that “better” deals did not ultimately materialize. Both companies are responsible to their respective shareholders – and it seems clear both negotiated faithfully on behalf of those shareholders.

It was McMaster’s job to do better for the state … and he clearly failed in that endeavor, at least in the minds of state lawmakers.

“Henry’s folly,” one lobbyist remarked in describing the disaster.

In the House, S.C. speaker Jay Lucas (above) has made it clear he wants to enter into further negotiations with NextEra. Readers will recall Lucas’ intervention in the Dominion deal to purchase SCANA was decisive. Can he wield the same power now on behalf of NextEra?

“The House is now cleared to engage in a process with NextEra to get a better deal,” one legislator told us. “And NextEra is willing to sharpen their pencil.”

Can a deal be done?

“NextEra better bring a Brink’s truck if it wants to buy Santee Cooper now,” one lobbyist told us, referring to the iconic armored trucks used to transport cash and other valuables.

NextEra actually has the resources to bring several Brink’s trucks, if it wants … but will it be enough to move the needle in the S.C. Senate?

In voting down the deals negotiated by the McMaster administration, the Senate finance committee (i.e. Leatherman) announced the formation of a five-member committee tasked with determining the next steps in the negotiating process. That committee consists of state senators Thomas Alexander, Tom Davis, Larry Grooms, Kevin Johnson and Nikki Setzler.

The composition of this panel is interesting in that it includes two ardent opponents to the sale of Santee Cooper – Grooms and Setzler.

Of course it also includes Davis (above), who has consistently been a staunch proponent of selling the debt-addled behemoth in the name of getting government out of the power generation business altogether.

“Leatherman put his thumb on the scale saying he really wanted to push Santee Cooper reform, but the panel can go either way,” one senator familiar with the appointments told us.

Davis is the key to that trajectory, sources told us. Will he aggressively advocate for a sale? Or will he leverage the process in the hopes of getting Santee Cooper out of the power generation business via other means?

We are referring, of course, to the ongoing discussion over regional transmission organizations (RTOs) that supporters claim enhance competition and lower rates. These RTOs got a shoutout last week from powerful House budget chairman Murrell Smith, who referred to them as “the future.” Meanwhile Davis, along with state senator Wes Climer of Rock Hill, S.C., is one of the top RTO backers in the Senate.

As part of this broader debate, lawmakers heard testimony this week from Caroline Golin – one of several energy experts representing the newly formed Coalition for Energy Market Reform, a nonprofit association that supports “elevating the role of the consumer” in North Carolina and South Carolina.

According to a spokesperson for the organization, it is comprised of “energy users, independent energy providers, and like-minded organizations that are committed to improving market opportunities for competition, innovation, and clean energy in the Carolina.”

Golin (above) argued the current situation presents “opportunities for market reform – not only for Santee Cooper but also for the other utilities in this state and really across the region.”

“We fervently believe that the market should be correct before we pick the market players,” Golan told lawmakers. “We want to do it thoughtfully, we don’t want to silo it by utility or by incident.”

Golan said the current debate should be focused on “the best way not only to reform Santee Cooper but to launch South Carolina into the future for economic development so that all customers in the state could benefit.”

Bottom line? Two-and-a-half years after the detonation point of NukeGate, state lawmakers remain nowhere near a resolution regarding Santee Cooper – which is absolutely inexcusable on multiple levels.

And frankly, the notion of allowing lawmakers to manage the “reform” of this tone-deaf bureaucracy is a frightening proposition given their frightfully inept management of South Carolina’s schools, roads, ports, pension fund, public safety agencies … you name it.

And McMaster? His administration – already constitutionally impotent – is putting on a clinic as to how not to use the limited authority with which it has been entrusted.

And yet its de facto leader is receiving massive raises?

And yet for beleaguered ratepayers and taxpayers, the beat goes on …

University Of South Carolina Board Meeting On Provost, Property Deal