South Carolina’s state-owned power company Santee Cooper and its private sector partner SCANA were warned over a year ago that the recently abandoned V.C. Summer power plant was “doomed” – but failed to protect Palmetto State ratepayers and taxpayers from the multi-billion dollar fallout.

That’s according to reporter Meghan Kinnard of The Associated Press, who dropped a Labor Day bombshell regarding the fiasco on social media …

Kinnard obtained the document on Sunday, according to her article.

The group that released it, SCEmpowered, wrote on its website that the report “laid out in chapter and verse actions the two monopolies should have taken in order to get the project back on track – recommendations that could have saved South Carolinians tens of millions of dollars in higher energy costs.”

Right off the bat, the summary of the report told SCANA and Santee Cooper leaders that a “significant correction” was needed eighteen months ago in order for them to offset “material delays and poor construction performance attributed to inadequate project integration and management, incomplete engineering, and rework associated with ongoing design alteration.”

In other words, SCANA and Santee Cooper were told they needed to press the restart button on this colossally failed project – which had experienced “nearly three years of delays” under its most recent “consortium” of contractors.

The report revealed that at of the end of 2015, less than 19 percent of the project had been completed and that “failure to realize a significant and sustained increase” in monthly construction progress would “invariably result in more project delay.”

The date on the report published by SCEmpowered is March 3, 2016 – sixteen months before Santee Cooper announced its decision to pull the plug on the project.

Here’s a copy of the document …

Kinnard’s bombshell is the latest “nuclear” detonation related to #NukeGate – the scandal surrounding the abandonment of the V.C. Summer project, which was supposed to have produced a pair of next-generation nuclear reactors in Jenkinsville, S.C. at a cost of $9.8 billion.

The money was spent … but the reactors still haven’t been finished.  In fact, some estimates indicate they could cost another $9 billion to complete.  For its part, Santee Cooper claimed another $16 billion was required to complete the project.

Unable to pony up its share of that cost, Santee Cooper pulled the plug on V.C. Summer … a decision that killed an estimated 5,600 jobs, squandered billions of dollars in investment (including more than $2 billion raised through rate increases on consumers), threw South Carolina’s energy future into chaos, cost Santee Cooper its credit rating and prompted a class action lawsuit against SCANA.

Santee Cooper’s former CEO Lonnie Carter has resigned his post in the aftermath of the debacle – but is slated to receive more than $16 million over the next two decades from the government-owned utility.

Santee Cooper has seen massive devaluation over the past decade.  Had it been sold when we first proposed doing so nine years ago, it would have netted the state billions of dollars.

Now state leaders cannot give it away …

McMaster is trying to do just that, but his efforts face long odds.  He’s also facing criticism in the wake of Kinnard’s explosive report from one of his 2018 rivals for the “Republican” gubernatorial nomination – attorney Catherine Templeton of Mount Pleasant, S.C. 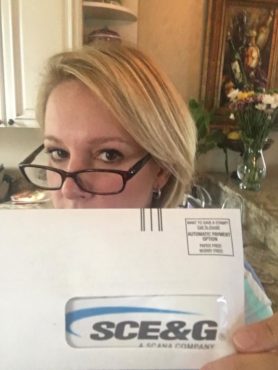 (Via: Catherine Templeton for Governor)

According to Templeton (above), McMaster’s appearance at a March 2017 SCANA executive retreat – and comments he made that same day about the project – raise serious questions.

The same day he appeared at the SCANA retreat, McMaster issued a statement saying he had “received briefings from the chief executive officers of the utilities involved” following the bankruptcy of Westinghouse, the project’s former lead contractor.

“I am confident that the plans and contingencies that they have prepared will result in the completion of the project,” McMaster said at the time.

S.C. Senator Tom Davis – another likely 2018 GOP gubernatorial candidate – said the latest #NukeGate revelations are another fundamental breakdown on the part of an overreaching yet accountability-averse state government.

“This report is precisely why free market advocates like myself have pushed for years to get government out of the power generation industry,” Davis wrote on his Facebook page. “When government manipulates industries to put taxpayers and ratepayers on the hook for investments like this, accountability goes completely out the window.  The saddest part is it’s nothing new. Such total lack of accountability is rampant in our state government. Our schools, roads, pension fund – all of them are terribly mismanaged by unaccountable bureaucracies.  Then when disaster inevitably strikes, we have a bunch of politicians in Columbia pointing fingers with one hand while dipping in your pocket with the other.”

“We will never change the outcomes until we change the system – and that means top-to-bottom structural reform of our entire state government,” Davis added.