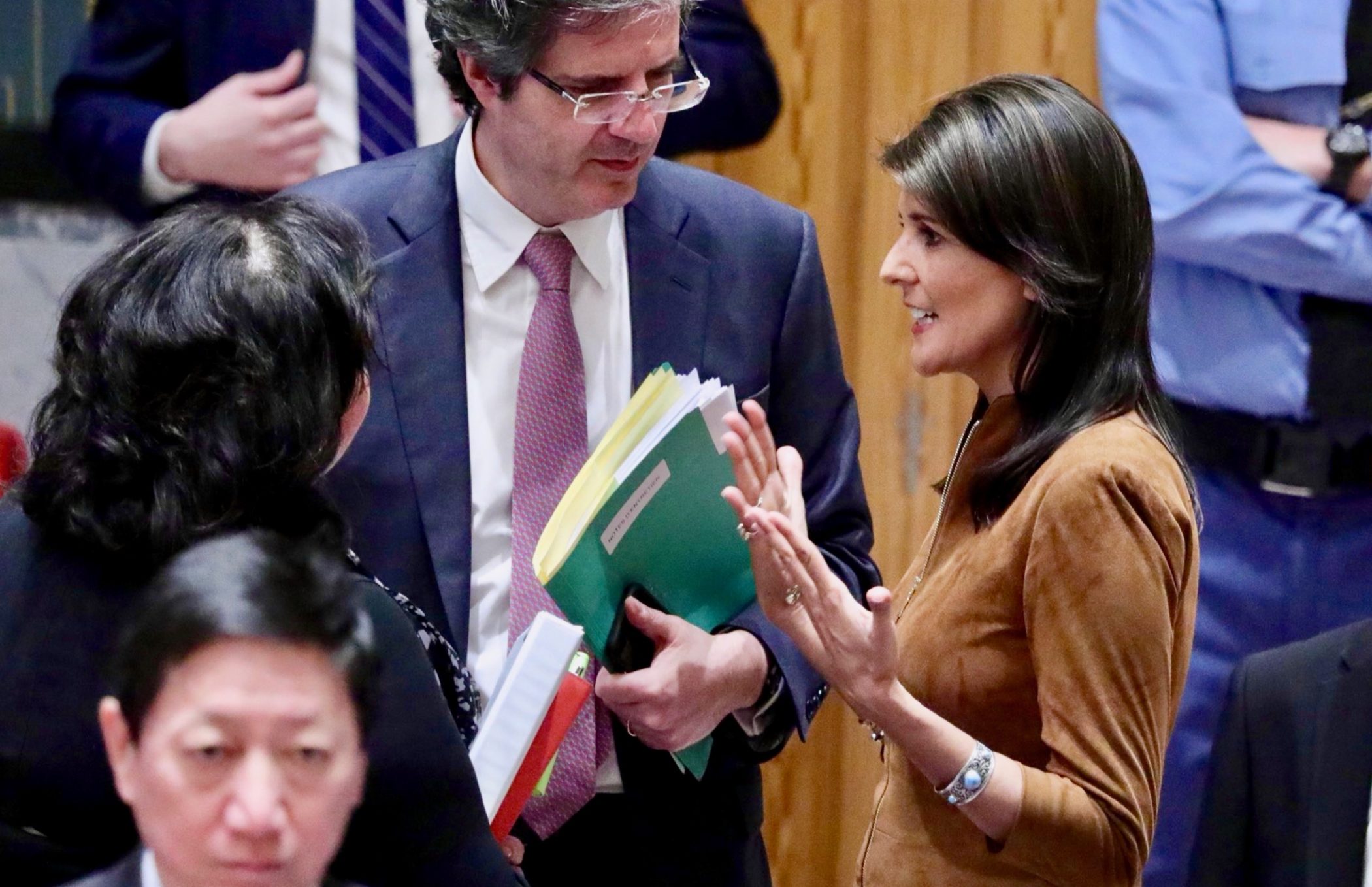 We’ve written several times recently on the rise of the neoconservative (a.k.a. warmonger) movement in the United States – specifically its surprisingly effective campaign to co-opt the administration of U.S. president Donald Trump.

(You know, the guy who promised us America was no longer going to be the world’s policeman).

Trump’s latest ill-conceived intervention in Syria marked a major coup for the neocons – as did his surrender (errr, signature) on a budget bill last month that included massive, multi-billion dollar spending increases on “national defense.”  But the battle for control of Trump’s foreign policy is bigger than that, and the war gods sought to press their advantage last week by escalating America’s proxy engagement in Syria into a full-blown Cold War II with Russia.

Trump’s ambassador to the United Nations, Nikki Haley, announced last Sunday that new sanctions would be imposed on Russia – a country she has frequently (and inaccurately) blasted in the past.

Haley was wrong about Russia, though … again.  No such sanctions were forthcoming.

Haley also got ahead of Trump when she said American ground troops wound remain in Syria indefinitely.  Shortly thereafter, the president reaffirmed his previously stated intention to extract them as soon as practicable.

But it was the Russian question that prompted the latest high-profile dust-up between Trump and Haley … and perhaps a peek into the future of “Republican” presidential politics.

The president’s top economic advisor, Larry Kudlow, told reporters last week that Haley “got ahead of the curve” with her Russian rhetoric.

“She’s a very effective ambassador, but there might have been some momentary confusion about that,” Kudlow said.

Haley responded with a shot heard ’round the Beltway – a statement delivered to neocon central Fox News in which she bluntly stated “with all due respect, I don’t get confused.”

Kudlow quickly backed down … or so it seemed.

After calling Haley to apologize, he placed a call to The New York Times – appearing at first to consume some additional humble pie.

“She was certainly not confused,” Kudlow told the paper “I was wrong to say that – totally wrong.”

“As it turns out, she was basically following what she thought was policy,” Kudlow said. “The policy was changed and she wasn’t told about it, so she was in a box.”

Yeah.  In other words Haley wasn’t confused, she was kept out of the loop.

Which is worse?  Good question …

Only a handful of Washington insiders bothered to read between the lines, though … meaning most of the coverage of this dust-up accrued to Haley’s benefit.  Decisively.

In fact, her bold pronouncements prompted additional chatter about her future on the national stage – including a possible primary challenge to Trump in 2020.

Haley backers laid it on thick …

“What distinguishes her from the star-struck sycophants in the White House is that she understands the intersection of strong leadership and public service, where great things happen,” Haley’s former spokesman Rob Godfrey told The Associated Press.

The AP article also revealed that Haley’s office “mistakenly blasted an email containing a series of press clippings that mention Haley – a message meant for the ambassador herself – to a number of journalists.”

Obviously this isn’t the first spat involving Trump and Haley – who were fighting off affair rumors just three months ago.

Trump was livid with his ambassador last December when she appeared on CBS to argue that women who have accused the president of sexual harassment in the past “should be heard.”

On the policy front, Trump’s administration fitted Haley for a choke collar a year ago in an effort to keep her “on message” in discussing American policy vis-à-vis several global hot spots.

Haley insisted a week ago her relationship with the president was “perfect,” but clearly that’s not true.  The only question is this: Who stands to benefit the most from its ongoing unraveling?

Across the pond, columnist Daniel McCarthy of The Spectator cut to the chase – ignoring the politics to focus on the puppeteers pulling Haley’s strings.

“Haley is every Never Trumper’s favorite member of the administration, and the esteem in which she is held by the president’s sworn enemies in his own party ought to put the White House on guard,” McCarthy wrote.

McCarthy added that the choice confronting Trump is simple: Accommodate the “War Party” or face a challenge from Haley in the next election.

“Another Iraq, another Libya, another decade in Afghanistan – if Trump won’t bend and deliver this, then the party of democratic holy war is ready for its next campaign: Haley 2020,” he concluded.

Which means “First in the South” South Carolina – where Haley was governor for six years (for better or worse) – had better get ready, too.