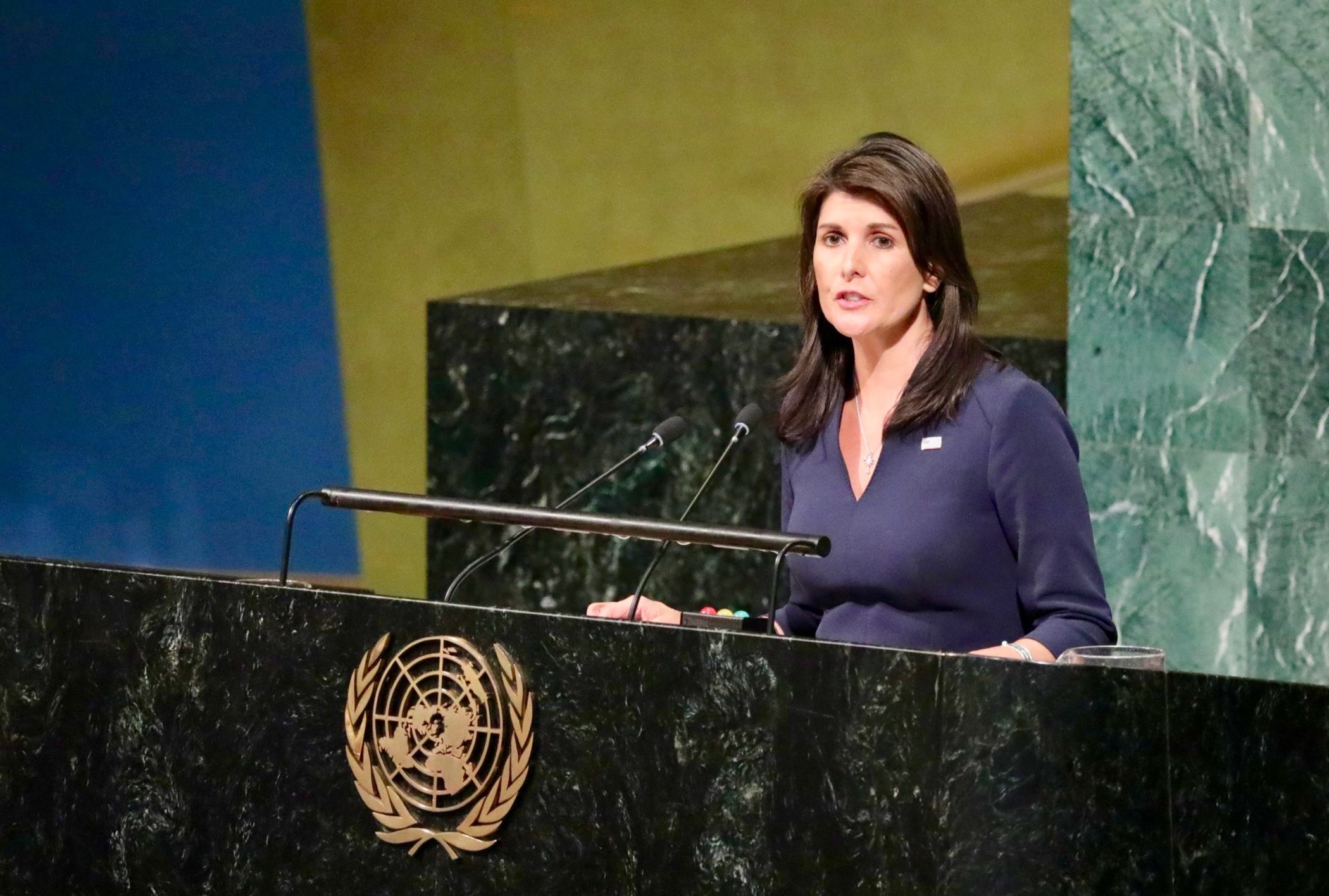 United States ambassador to the United Nations (UN) Nikki Haley maintained this week that America’s recent attack on Syria was necessary because it will help prevent chemical weapons from being used in our country.

In an interview ripped straight from an episode of Homeland, Haley channeled her inner Dar Adal when she claimed that America’s latest unconstitutional intervention in Syria was warranted because it was defensive in nature.

“This very easily could happen in the United States if we’re not smart, and if we’re not conscious of what’s happening,” Haley told Fox News on Sunday. “We have to be very conscious of the fact that we cannot allow even the smallest use of chemical weapons.  That’s why you saw the president strike this past weekend.”

The decision by U.S. president Donald Trump to launch a series of unauthorized airstrikes against targets in Syria last Friday in response to an alleged chemical weapons attack the previous week was in no way, shape or form defensive.  Nor do we believe taking out Syria’s alleged cache of chemical weapons is, to quote Trump, “a vital national security interest of the United States.”

What was this attack?  An ill-advised escalation of a proxy war – one that occurred less than two weeks after Trump announced his intention to remove U.S. troops from this war-torn nation.

“I want to get out,” Trump said on April 3.  “I want to bring our troops back home. I want to start rebuilding our nation.”

That sort of de-escalation – which is precisely what Trump promised he would do during the 2016 campaign – was obviously unacceptable to the war gods.

And so on cue, an alleged chemical weapons attack was launched on April 7 in a suburb of Damascus – ostensibly by the regime of Syrian president Bashar al-Assad.

Do we buy this narrative?  Not for one second.

Aside from the suspicious timing, as we’ve noted in the past prior chemical weapons attacks in Syria have been exposed as false flags.

Again, this is precisely the sort of thing ripped straight from an episode of Homeland – with shadowy deep state operatives puppeteering the mainstream media on behalf of the military-industrial complex.  All while U.S. taxpayers shell out billions of dollars they don’t have on a massive new military spending spree – including military spending for other nations.

He rolled over for it.

Pretty surprising, isn’t it?  Yes.  This is the guy who beat both political parties – and the mainstream media – to become president.  A guy who vowed in his inaugural address to fundamentally reorient the foreign policy of the United States away from costly, reckless and ineffective global interventionism.

America was no longer going to be the world’s policeman, Trump said … yet our nation is once again picking up the billy club.

In fact, in addition to the recent airstrikes Haley told Fox News that the ground troops Trump was planning on removing from this sovereign Middle Eastern nation would be staying there indefinitely – at least until America had destroyed the Islamic State (ISIS), removed all chemical weapons and gained a better idea of what the Islamic Republic of Iran was up to in the region.

“We are not going to leave until we know we have accomplished those things,” she said.

In other words, the coup is complete.

Seriously: If they can get a guy like Trump to flip, there really is no hope.

Also, it’s not even remotely lost on us that in between his announcement about pulling ground troops out of Syria and committing us to perpetual war there, the office (and temporary residence) of Trump’s most prominent personal attorney was raided by agency of the Federal Bureau of Investigation (FBI).

Bottom line?  Our nation has crossed another significant milepost on the road to perpetual enslavement at the hands of the military-industrial complex – which is exactly what U.S. president Dwight Eisenhower warned us against in his farewell address in 1961.

If they can get a guy like Trump to flip, there really is no hope.

In the 1991 movie JFK, there was a memorable scene filmed on the National Mall between a fictitious 1960s-era deep state operator (portrayed by Donald Sutherland) and Jim Garrison (portrayed by Kevin Costner).  Garrison was the district attorney of Orleans Parish, Louisiana – a guy who doggedly pursued an alleged conspiracy into the assassination of U.S. president John F. Kennedy.

In that famous scene, the deep stater – “Mr. X” – shared some pearls of wisdom with Garrison about the underlying motivation of the deep state.

“The organizing principle of any society, Mr. Garrison … is for war,” he said.  “The authority of the state over its people resides in its war powers.”

Sadly, that’s never been more true than it is today …

Maybe not.  But it would be nice to have a president who realized it’s a war worth waging …