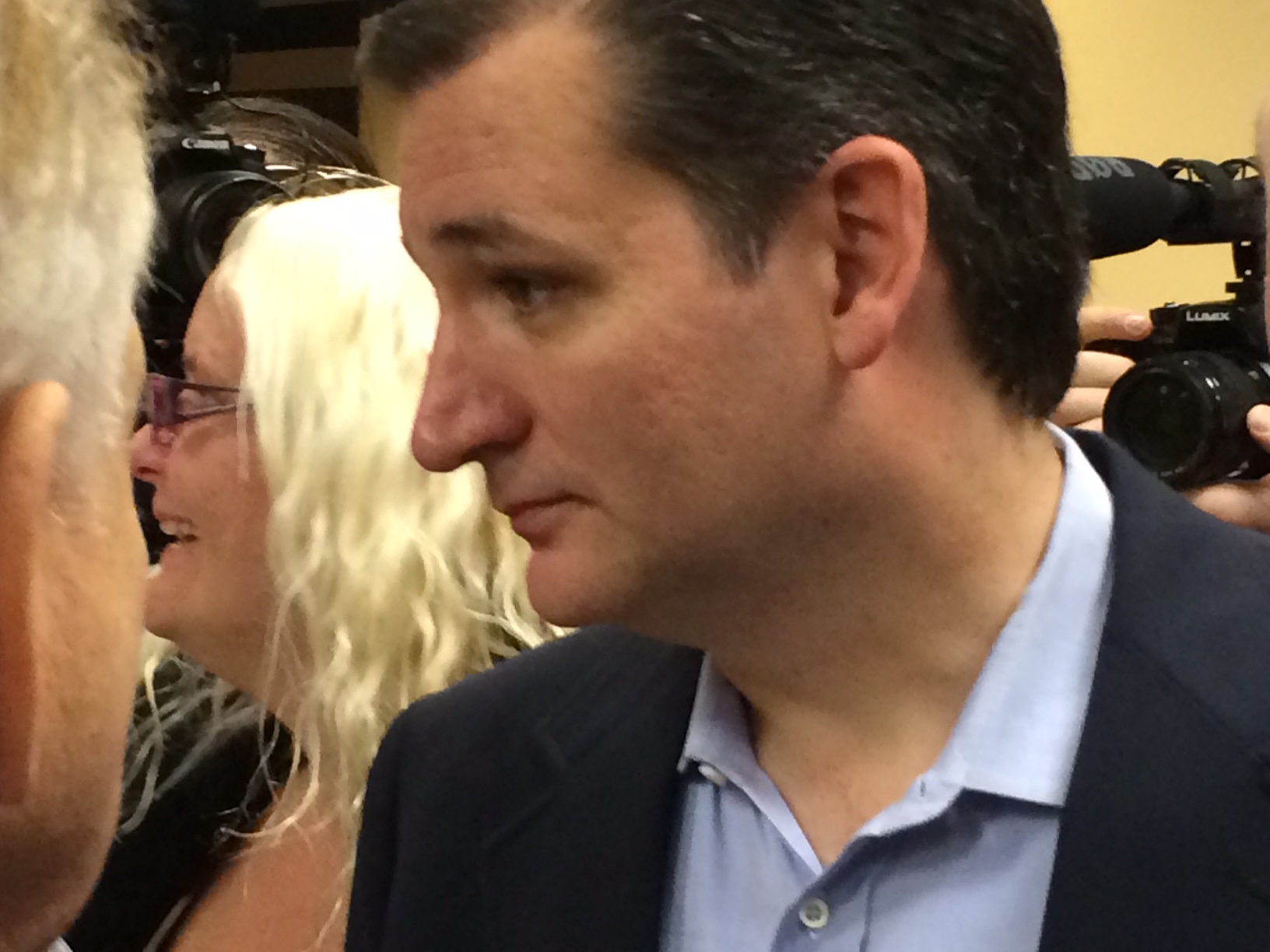 || By FITSNEWS ||  Let’s face it … we live in a world of labels.   And in no arena are labels more impactful than in the world of politics – assuming of course the recipient of the label can show they’ve actually earned it.

That’s rare … but occasionally it happens.  And when it happens, it has the potential to move the masses (even those increasingly resistant to voting).

Amid a sea of self-anointed “Republicans,” “conservatives,” and “Tea Party” candidates, voters are looking far and wide for aspiring leaders whose records actually match the all-too familiar rhetoric emanating from their all-too familiar stump speeches.  They’re looking for leaders who have earned their stripes, in other words … amassing battle scars (and credibility) on issues used by others as props.

Take the high stakes 2016 “Republican” presidential primary – which unofficially kicked off this weekend in Myrtle Beach, S.C. at the 2015 South Carolina Tea Party convention.  We attended this event – which represented a key early mile marker in the “First in the South” presidential primary (scheduled to be held next February).

Trump obviously made the big splash landing at the convention … whereas Carson seemed to have the strongest showing of grassroots support among convention-goers (even if he left our founding editor feeling unsatisfied).

Santorum?  Judging from the comparatively low attendance at his speech, his candidacy appears to be an afterthought (which in our book is frankly is more of a thought than it deserves).

But what of Cruz?  Glad you asked …

Along with U.S. Sen. Rand Paul – who did not attend the South Carolina convention – Cruz is hoping to emerge in 2016 as a leading alternative to establishment GOP candidates like Mitt Romney, Jeb Bush and Chris Christie.  Of course his strategy for becoming the anti-establishment pick is vastly different from Paul’s – which up to this point has involved cozying up to the GOP leadership at every opportunity.

“You know what electability is?” Cruz asked attendees during his address to the South Carolina Tea Party convention.  “It’s nominating the candidate closest to the Democrats.”

Exactly … and it doesn’t work.

“Who in their right mind would listen to someone who keeps getting whooped about ‘how not to get whooped?'” he asked. 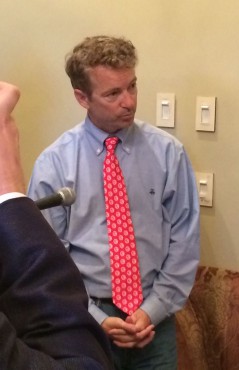 Let’s look at the tale of the tape, shall we?  Both Paul and Cruz have excellent voting records when it comes to protecting and promoting American freedoms and free markets.  Of that there can be no doubt.  Both are also “genuine article” fiscal conservatives who have taken very public positions against their party’s leadership (check out our coverage of their high-profile filibusters HERE and HERE).

Also, both believe fervently the GOP can be saved (a fantasy we abandoned years ago).

But that’s where the similarities end … and where the seeds for a winning South Carolina campaign begin for one of these two Senate “outsiders.”

Which one are we referring to?  Like it (him) or not, Cruz.

First, let’s hear the case as it was made to us by one of the Senator’s strongest supporters …

“Senator Cruz is a young and dynamic leader who has the ability to inspire all factions of the party,” said Katrina Pierson, a Texas grassroots activist who helped Cruz win his U.S. Senate seat in 2012. “His ability to bring together a coalition of Republicans, Libertarians, Independents and even Democrats is what the establishments on both sides fear.  And they should be very afraid – as 2016 draws near a potential candidate like Cruz could very well fracture the paradigm of the ruling class as a leader of the free people emerges to restore liberty and justice for all.”

Makes you want to break out in “My Country ‘Tis of Thee,” doesn’t it?

Asked about whether she thought Cruz could win South Carolina, Pierson said her man could win “all nine planets” in the solar system.

Obviously Pierson – a former congressional candidate and owner of a Texas-based consulting firm – is biased.  Hell, she introduced Cruz prior to his South Carolina speech.

But does that make her premise any less valid in the Palmetto State?

Let’s take a look and see …

If politics is a game of addition – and trust us, it is – Cruz could conceivably add votes from a lot of different pools.

“When I slam (Cruz) for Bible-thumping or pandering to the neoconservatives – the irony is (he’s) actually going to pick up support in South Carolina,” FITS’ founding editor Will Folks told one well-placed member of Cruz’s entourage.  “I just forget sometimes not everybody down here is on board with my brand of secular libertarianism and non-interventionism.”

The balancing act, though, comes in the support Cruz could potentially lose if he courts the far right wing constituencies too aggressively.  In other words, if his red meat is too raw – other potential GOP primary voters could choke on it, and scurry to Rand Paul’s banner.

So far, Cruz seems to be navigating the tight rope well.  On the one hand, he’s affirmed his support for long-standing American allies while also endorsing the stated objective of the latest “War on Terror.”

“We need to stand with the nation of Israel,” he told the crowd in Myrtle Beach.

Cruz also said that America could never effectively wage war against “radical Islamic terrorism” if its leaders were too afraid to even invoke the term – clearly implying the administration of Barack Obama has been soft on Islamic fundamentalism.

“The men who flew those planes into the Twin Towers – they weren’t a bunch of ticked off Presbyterians,” Cruz said.

Of course Cruz’s rhetoric – while aggressive – wasn’t peppered with Lindsey Graham-style demands to invade every nation in the Middle East that doesn’t fly the Star of David on its flag.  There were no references to “boots on the ground” or “nation-building.”  In other words, Cruz seemed to be staking out foreign policy ground to the right of Rand Paul – yet to the left of Graham and fellow warmongering U.S. Sen. John McCain.

Speaking of “solid gold real estate,” Cruz has amassed plenty of it on the one issue that “Republicans” have been railing on for the last five years: Obamacare.

It goes without saying every candidate seeking the GOP nomination in 2016 opposes this socialized medicine monstrosity – as they should.  So, what elevates Cruz’s opposition to this hated law from the contempt of his contemporaries?  Well, when the rest of the Washington, D.C. “Republican” establishment decided to roll over on this issue, he stood firm – for twenty-one hours … without sitting down.

Try doing that sometime and see how long you last …

Cruz’s filibuster put him on the map on the biggest issue in politics.  And as his supporters are quick to point out, it lasted eight hours longer than Rand Paul’s.

“Ours is bigger,” one Cruz supporter joked with FITS.

Unlike the vast majority of “Republican” Senators, Cruz also backed up his impassioned filibuster by making good on his promise to vote against any budget that included funding for Obamacare.

“I ain’t interested in speeches,” he said during his South Carolina address.  “Show me your stripes.  If you’re really a conservative, you shouldn’t have to tell anybody.”

While other “Republicans” believe they can score points on Obamacare by simply shouting their opposition to the law louder than the next guy, Cruz doesn’t have to do that.  He has a record on which to stand.

That’s the sort of “walking the walk” South Carolina conservatives are bound to appreciate … even if they aren’t initially inclined to support Cruz.

Now … does any of this guarantee Cruz will win (let alone become a top tier candidate in) the Palmetto State?  No.  Support for the GOP establishment runs strong in South Carolina, and any candidate looking to win from the right faces an uphill battle.  Beyond that, a mountain of special interest money is going to flow toward left-leaning”Republicans” who align themselves with Washington’s status quo.   That mountain of money is going to buy a lot of cheap television time here – and intellectually incurious SCGOP primary voters have proven especially susceptible to slick advertising campaigns from faux “conservatives” in the past.

And then there’s Rand Paul … who despite the many ideological dissimilarities to his famous father will receive a ton of the elder statesman’s support by default.

Can Cruz make inroads among Paul supporters?  That remains to be seen.

Ted Cruz has a long way to go to become relevant as a “First in the South” contender.  But he has something most other aspiring candidates lack – a wide open path to get where he want to go.

@fitsnews Yes. If Newt won so could Cruz