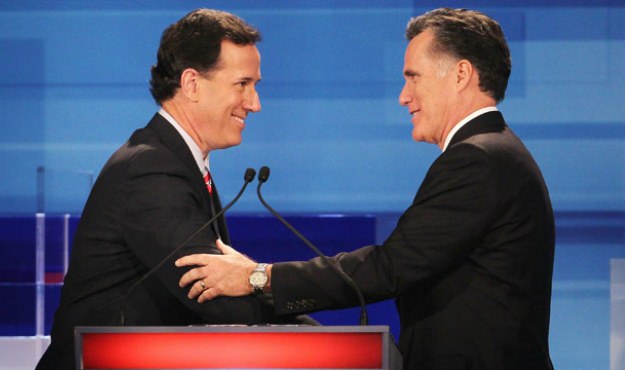 FORMER SENATOR LEAVING “OPTIONS ON THE TABLE” FOR 2016

Seriously … he’s got evangelical panderer and fiscal liberal Mike Huckabee on hold on one line, and now Rick Santorum is beeping in?

The sweater-vested former U.S. Senator from Pennsylvania – part of the great GOP fiscal betrayal of the previous decade – is strongly hinting at another presidential run in 2016.

You know … since “Republicans” have nothing better to offer the electorate than sanctimonious recyclables slavishly devoted to big government (all rhetoric to the contrary, naturally).

Great … that means early voting South Carolina should expect to see a nauseating amount of this over-the-top moralizer in the coming months and years.

Santorum – who lost to fellow establishment “Republican” Mitt Romney in the 2012 race – is one of the leading critics of the emerging fiscally conservative, socially libertarian wing of the GOP. In fact he’s downright hostile to elected officials who are championing this ideology – and is currently spearheading a movement (along with social conservatives like Huckabee and so-called “neo-conservatives” like U.S. Sen. Lindsey Graham) to boot them from the party.

Yeah … like we said at the time, “good luck with all that.”

Anyway, here’s the clip of Santorum signaling his 2016 interest …