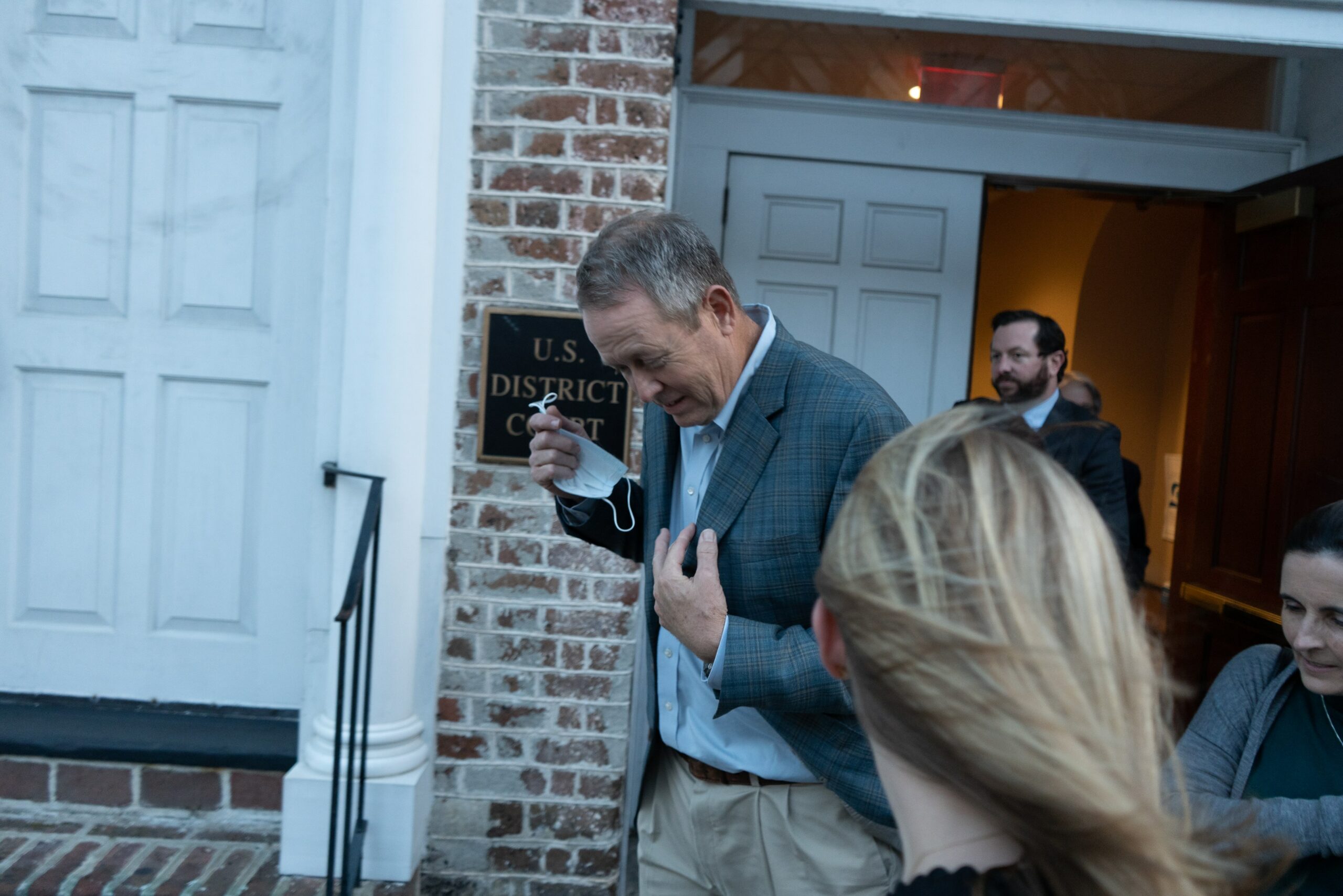 Heading into the federal trial of disgraced banker Russell Laffitte – the first criminal trial tied to the ‘Murdaugh Murders’ crime and corruption saga – conventional wisdom held that the roof was about to be blown off of a massive conspiracy.

After all, Laffitte – a key cog in the alleged financial scheming of disbarred attorney/ accused killer Alex Murdaugh – made multiple recordings which pointed to the alleged involvement of additional individuals at Palmetto State Bank (PSB), the financial institution which fired him in January for his alleged participation in Murdaugh’s myriad fleecings.

There was also speculation these recordings could implicate attorneys at the Hampton, S.C.-based law firm formerly known as Peters, Murdaugh, Parker, Eltzroth & Detrick, P.A. (PMPED) – where Murdaugh worked alongside his father and brother for decades.

While the battle over Laffitte’s recordings was raging – a related lawsuit pointed to the alleged involvement of other PMPED attorneys in Murdaugh-related scheming (although they have vigorously denied these claims and pushed for sanctions against the lawyer who brought the suit).

Meanwhile, the federal prosecutors bringing the case against Laffitte faced credible criticism regarding multiple conflicts of interest within their Charleston, S.C. office.

The stage was set for Laffitte and his attorneys – former U.S. attorney Bart Daniel (above) and former federal prosecutor Matt Austin – to argue their client was, in his own words, a “pawn.” And by extension, that the federal government was more interested in cauterizing a massive scandal than it was in seeking true justice for its victims.

As the second week of the Laffitte trial draws to a close, though, the “broader conspiracy” remains elusive. And federal prosecutors led by assistant U.S. attorney Emily Limehouse have delivered absolutely damning evidence and testimony against Laffitte – directly implicating him in the crimes of which he stands accused.

The counter-narrative from the defense?

Actually, it was worse than nothing.

The first round of witnesses called on Russell Laffitte’s behalf this week appear to have only buttressed the prosecution’s core argument – that Laffitte conspired with Murdaugh to raid the accounts of people whose money he should have been protecting.

Oh, and that Murdaugh received favorable treatment from the bank despite running massive overdrafts.


In fact, the lingering question as this trial takes a 24-hour hiatus on Thursday (November 17, 2022) is as follows: Is Laffitte actively trying to go to federal prison?

“Federal prison is better than state prison,” one Hampton, S.C. source told me, referring to the charges Laffitte is facing at the state level related to the Murdaugh mess.

One by one, defense witnesses – especially Laffitte’s father and sister – provided incriminating admissions which poked holes in the very defenses Daniel and Austin had spent the better part of the last two weeks trying to erect.

Charles Laffitte Jr., for example, testified on cross-examination that he knew the purpose of a controversial $750,000 loan extended to Murdaugh by PSB in July 2021 was to repay attorneys related to a prior settlement Murdaugh had stolen money from – and to address an overdraft in his account of more than $367,000.

“After that I turned it over to Russell to get it done,” Laffitte said, referring to his son.

On July 15, 2021, $350,000 from this loan was transferred to the firm of attorney Chris Wilson of Bamberg, S.C. – which was owed money in connection with a case he had previously worked with Murdaugh. The remaining $400,000 was transferred to Murdaugh’s personal account on August 8, 2021 to cover the overdraft.

All of this was accomplished, incidentally, before the loan paperwork had even been formally approved.

“This is significant because his son can no longer claim he didn’t know what Murdaugh intended to do with the loan,” our director of special projects Dylan Nolan tweeted during the trial.

In fact, Limehouse’s cross-examination strongly hinted Laffitte’s father could be guilty of some of the same criminal conduct of which his son has been accused.

Seriously … what was the purpose of such a witness for the defense? Because again, not only did Charles Laffitte open himself up to scrutiny on these allegations … but he buried his son.

Which, again, makes me wonder … is all of this some collaborative effort to get Laffitte as much federal prison time as possible?

Discussions related to these financial transactions could also wind up having significant impacts on Murdaugh’s upcoming murder trial.

For example, Russell Laffitte’s brother – Charles Laffitte III – testified Alex Murdaugh told him he was having trouble getting his wife, Maggie Murdaugh, to agree to an appraisal date for their jointly owned Edisto Beach, S.C. residence.


Maggie Murdaugh was living at this home in the months leading up to her murder, and owned a “one-half, undivided fee-simple interest” in the property, according to county tax records.

This is potentially significant as it could point to another motive for Murdaugh to kill his wife – whom sources have previously told this news outlet was “lured” to the family compound by her husband on the night of her murder.

Sometime after 8:44 p.m. EDT on June 7, 2021, Murdaugh is accused of killing both his wife and younger son, 22-year-old Paul Murdaugh, near the dog kennels at the family’s 1,700-acre “Moselle” hunting property along the Salkehatchie River.

Paul Murdaugh was hit by a pair of shotgun blasts on that fateful evening – one to the head, the other to the arm and chest. Maggie Murdaugh was killed by multiple shots from a semi-automatic rifle at or around the time her son was killed. At least two of Maggie Murdaugh’s gunshot wounds were inflicted as she was laying wounded on the ground – consistent with initial reports we received of “execution-style” slayings.

Less than 48 hours after the murders, I reported Alex Murdaugh was a “person of interest” in connection with the investigation into the slayings. Four months ago, he was formally charged with two counts of murder. Murdaugh has pleaded not guilty and is scheduled to stand trial in Colleton County beginning on January 23, 2023.

The Laffitte trial has bled over into the state’s murder case against Murdaugh on multiple occasions.

The biggest development? In her opening arguments, Limehouse (above) dropped a bombshell when she claimed Murdaugh was confronted by someone at the PMPED law firm about financial irregularities involving his case with Wilson. That confrontation took place on June 7, 2021 – the day of the murders.

Firm financial officer Jeanne Seckinger testified under oath that she called Murdaugh the morning of the murders to discuss “fees from the case with Wilson” and that he insisted the money was in Wilson’s trust account. Murdaugh then “abruptly end(ed) the conversation” after receiving a call his father was in hospice.

According to an indictment from the South Carolina statewide grand jury (.pdf), Murdaugh previously convinced Wilson to write him three checks totaling $792,000 between March and July of 2021 for his share of the legal fees on a case they were working together.

Murdaugh told Wilson he was “going to structure his fees in part because of possible civil liability” related to the 2019 boat crash involving his late son.

The boat crash case – which you can read more about here and here – is the moment the “House of Murdaugh,” a crumbling legal dynasty which enjoyed near-dictatorial power over a five-county region in the southernmost tip of South Carolina for decades, began to collapse.

According to state prosecutors, “staff at PMPED started to make inquiries to (Wilson) and Murdaugh about disbursement of the legal fees,” at which point Murdaugh told Wilson he needed to “return the $792,000 to the (Wilson)’s trust account” so it could be reimbursed to the firm.

This is the reason Murdaugh needed money from the bank …

This news outlet previously reported that as early as April 2021, the statewide grand jury was already investigating Murdaugh’s finances. Readers will also recall that three days after the murders – on June 10, 2021 – Murdaugh was scheduled to appear in court to disclose his finances in response to a subpoena tied to the boat crash case.

Was June 7, 2021 the moment everything finally caught up with Alex Murdaugh?

Bottom line? In addition to drawing a bead on Laffitte, the federal trial is producing significant material for state prosecutors to use against Alex Murdaugh when his murder charges are heard in January.