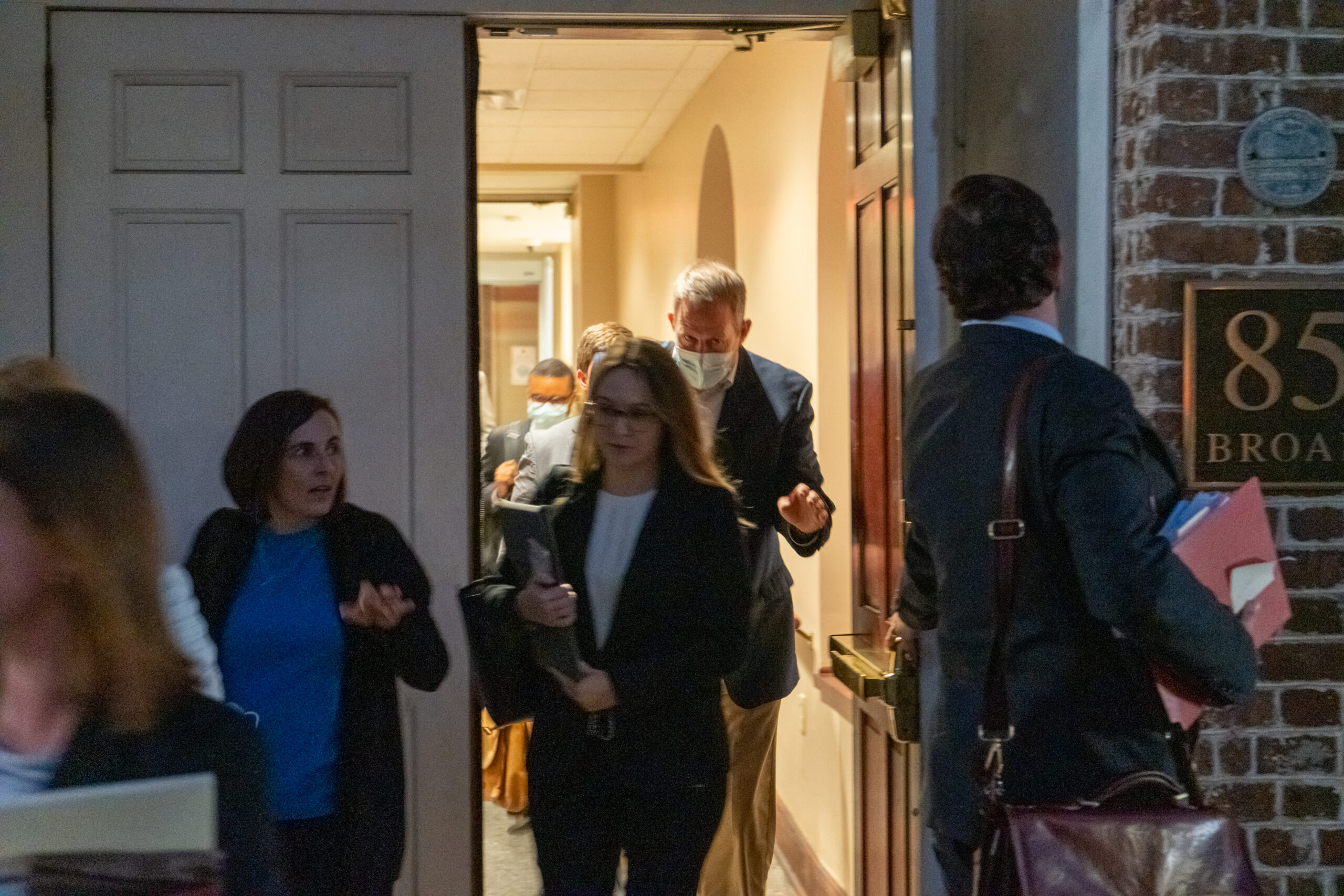 The federal trial of Russell Laffitte – the disgraced South Carolina banker accused of using other people’s money to cover up the financial crimes of accused killer Alex Murdaugh – has thus far centered around Murdaugh, the alleged architect of the myriad schemes.

The first day’s bombshell? The revelation that Murdaugh was confronted by an employee at the Hampton, S.C. law firm where he worked – formerly known as Peters, Murdaugh, Parker, Eltzroth & Detrick, P.A. (PMPED) – about financial irregularities in his cases.

As I reported yesterday, the revelation from lead federal prosecutor Emily Limehouse (above) aligns neatly with one of the initial criminal indictments against Murdaugh filed nearly a year ago. According to that indictment (.pdf), Murdaugh convinced attorney Chris Wilson of Bamberg, S.C. to write him three checks totaling $792,000 between March and July of 2021 for his share of the legal fees on a case they were working together.

Murdaugh told Wilson he was “going to structure his fees in part because of possible civil liability” related to a boat crash involving his late son.

The February 24, 2019 boat crash – which you can read more about here and here – is the moment the “House of Murdaugh,” a crumbling legal dynasty which enjoyed near-dictatorial power over a five-county region in the southernmost tip of South Carolina for decades, began to collapse.

Not only did it expose Murdaugh to significant financial liability, it forced him to open his financial accounts for public inspection.

In fact, Murdaugh was scheduled to appear in court three days after the murders – on June 10, 2021 – to respond to a subpoena for his financial records in that case.

On Wednesday – the second day of the trial – we learned the person who confronted Murdaugh about the missing money was Jeanne Seckinger, chief financial officer at the firm.

Seckinger (above) testified under oath that she called Murdaugh to discuss “fees from the case with Wilson.”

Murdaugh indicated to her that he wanted to “defer money” from cases he was involved in or “put (money) in his wife’s name” due to potential civil liability stemming from the boat crash lawsuit, Seckinger testified.

“At this point we’re concerned, we know about the boat accident – we don’t want him to hide money due to this boat wreck,” she said.

Wilson has been cooperating with prosecutors for some time, according to his attorneys. In fact, last November he issued a statement through his counsel about helping agents of the S.C. State Law Enforcement Division (SLED) investigate “a scheme (Murdaugh) accomplished by misleading Wilson about the position of Murdaugh’s firm.”

During their conversation on June 7, 2021, Seckinger said she asked Murdaugh for “proof” of where the money from the Wilson case was.

Murdaugh claimed the money was in Wilson’s trust account. Then he received a phone call informing him his father was in hospice and “abruptly end(ed) the conversation,” she said.


At PMPED, though, Seckinger said Murdaugh’s “stream of chaos” had thrown the firm into “a tizzy.”

“Our whole firm was in a tizzy, nobody knew what was going on, there was fear in the office,” Seckinger testified, referring to the shocking aftermath of the double homicide.

While Seckinger’s story dominated headlines – and drove the focus of this trial back to Murdaugh and the graphic double homicide at the center of this still-unspooling maze of alleged criminality – Limehouse and her team of prosecutors scored points against Laffitte during their redirect examination of the witness.

In describing the relationship between Murdaugh and Laffitte related to the stolen settlement funds, Limehouse achieved an incredibly effective rhythm with Seckinger on the stand.

“Who is Alex relying on to make all of these transactions?” she asked Seckinger.

“Who is keeping track of all these details?”

Question after question, settlement after settlement, check after check … the answer was the same.

“That’s not how this works,” Gergel fired back. “There’s no re-recross.”

Heading into this trial, Laffitte’s attorneys – former U.S. attorney Bart Daniel and former federal prosecutor Matt Austin – successfully drove the narrative that their client was merely a “pawn” in a broader conspiracy led by Murdaugh and others.

And while the existence of a broader conspiracy still seems highly probable, so far Laffitte’s attorneys haven’t demonstrated it … although in fairness, they have yet to play any of the recordings made by their client which allegedly implicate others in his misdeeds.

That is coming, though, I am told …

What has been demonstrated? That Laffitte was no pawn …

Prosecutors have methodically and adeptly used the first three witnesses they have called in this case to introduce damning evidence against Laffitte, and so far Laffitte’s attorneys have been completely shut down in their efforts to shift the blame for those actions onto others.

If that dynamic continues throughout this trial, Laffitte is toast …

That is surprising considering the level of acrimony that existed between these two offices last fall as these cases were beginning to ramp up … but also bodes poorly for the named defendants in these cases.