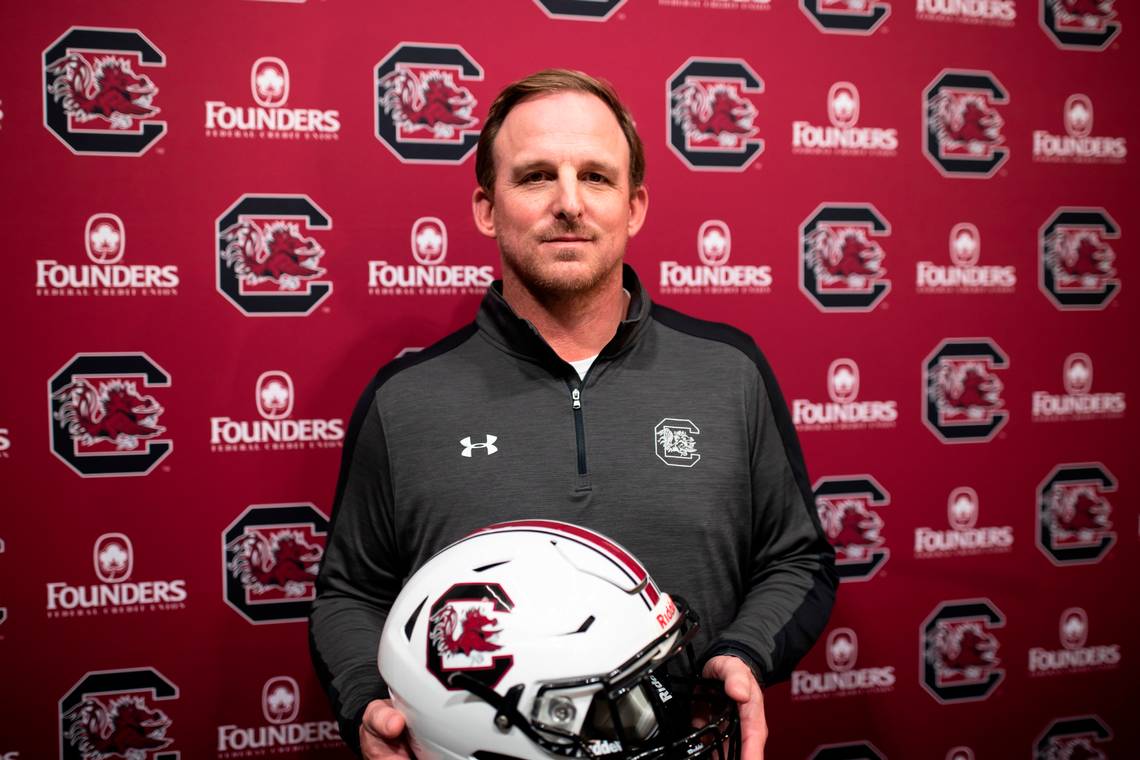 Six years ago, University of South Carolina athletics director Ray Tanner hired Will Muschamp to be the school’s head football coach. Tanner’s decision – which he and Gamecock football fans would live to regret – was made with the full knowledge that Muschamp burned through three offensive coordinators during his disastrous four-year stint with as head coach of the Florida Gators from 2011-2014.

Muschamp actually brought the last of his three offensive coordinators, Kurt Roper, to South Carolina with him in 2016 – only to discover there was no education to be had from the second kick of a mule. After turning in one of the worst offensive seasons in Gamecock history in 2016, things were supposed to take off for South Carolina offensively in 2017. Instead, quarterback Jake Bentley regressed following a solid freshman campaign – and the Gamecocks wound up ranking No. 109 in total offense and No. 99 in scoring offense that year.

All of which led to Roper’s firing.

Next up? Wide receivers coach Bryan McClendon, who was elevated to the offensive coordinator position prior to the 2018 Outback Bowl.

The sugar high didn’t last, though …

After getting a huge raise, McClendon’s Gamecocks laid a goose egg against Virginia in the 2018 Belk Bowl – and from there, things completely fell apart. South Carolina averaged 22.4 points per game during the 2019 season (No. 104 nationally) and only 370 yards per game (No. 96 nationally) en route to a 4-8 record.

Oh, they also scored just one touchdown over their final three games – a fourth down conversion against Appalachian State after a penalty knocked them out of field goal range.

Driving this decline was an abject failure to convert on third down. South Carolina made good on only 59 of 184 third down attempts in 2019 – an anemic 32.1 percent conversion rate that ranked tenth-worst in the entire nation.

When Muschamp hired McClendon, I called it “the biggest decision (he) will make as South Carolina’s head coach” – adding that if it didn’t pan out, 2017’s 8-4 record would “be the high-water mark of the Muschamp era.”


The implosion that began in 2019 achieved terminal velocity in the Covid-shortened, conference-only 2020 season.

To replace McClendon, Muschamp hired former Colorado State head coach Mike Bobo in what amounted to a “do-or-die” move – but the Gamecock offense continued to sputter. Under Bobo, South Carolina ranked tenth in the Southeastern Conference with 370 yards per game and eighth in scoring with 27.3 points per game – at least at the point in the season when Muschamp was fired.

Shockingly, though, that atrocious performance actually looked good next to the Gamecock defense …

In the three weeks prior to his firing, Muschamp’s team fell to LSU, Texas A&M and Ole Miss by a combined score of 159-79. South Carolina’s defense gave up a shocking 1,779 yards in those three contests – and would go on to surrender another 103 points and 1,264 yards over its final three games without the “defensive genius” on the sidelines.

When Tanner announced the hiring of Shane Beamer last December, Bobo was initially kept on staff – but bolted the Gamecock program barely a month later to take the play-calling job at Auburn. Leaving with him for the Plains was offensive line coach Will Friend, who like Bobo had finalized his South Carolina contract only a week earlier.

Prior to that, he coached tight ends at Baylor and was head coach at Tennessee Tech for two years from 2016-2017. Satterfield was fired from that job after posting a 1-10 record during his second season at the helm. Of interest? In the spring prior to his final year with the Golden Eagles, Satterfield was place on administrative leave after he was accused of violating discrimination, harassment and workplace violence policies established by the Tennessee board of regents.

School officials never disclosed details of the investigation into Satterfield, who appears to have been fired for no other reason than producing a terrible product on the field.

Why bring this up? Because earlier this week, Tony Morrell – co-owner and analyst of The Big Spur, a popular Gamecock athletics website – fielded a question on his forum about whether Satterfield had been “verbally abusive” toward Gamecock players since arriving in Columbia, S.C.

“I’ve heard talk of similar things,” Morrell responded, referencing the Tennessee Tech reports. “Not only with players but with other coaches.”

It seems logical to me some degree of “verbal abuse” goes with the territory of playing college football (and, well, other sports). Frankly, reports related to the verbal haranguing of players do not concern me all that much – unless Satterfield is taking things to some other level I don’t know about.

Blessing out other coaches, though? That could be a different story.

Sadly, the story that remains utterly unchanged at South Carolina is a complete and total lack of offensive production.

As of this writing, South Carolina ranks No. 111 (out of 130 FBS programs) in total offense – generating an anemic 333.5 yards per game. The Gamecocks are only slightly better when it comes to scoring offense, ranking No. 108 nationally.

That latter number is actually much worse than it looks, too. Of South Carolina’s fifteen total touchdowns this season, three have been scored by the defense and one was scored (last Saturday) by the punt team. Of the remaining eleven touchdowns, five of them were recorded in a season-opening victory over Eastern Illinois – a bottom-tier FCS team which has posted a 3-21 record in two-and-a-half seasons under head coach Adam Cushing (including a 1-5 mark so far this year).

How is Satterfield’s unit faring against FBS defenses? Not well …

South Carolina has had a total of 57 offensive possessions against FBS opponents so far this season. Of those, only six have produced offensive touchdowns. Another eight have yielded field goals – meaning South Carolina’s offense is getting points on less than a quarter of is possessions (24.5 percent, to be precise) and finding pay dirt only one out of ten times (well, 10.5 percent).

For those of you keeping score at home, there are three possessions to account for … one of which ended in a safety (against Georgia), one of which ended at halftime (against East Carolina) and the aforementioned special teams score against Tennessee.

Not surprisingly, Satterfield is getting roasted by hometown media for these results. Another analyst at The Big Spur, JC Shurburtt, noted after the Tennessee game he had “never seen play-calling this erratic and bad.” Meanwhile, Satterfield’s decision to have defensive tackle Jordan Burch attempt a pass out of the backfield against the Volunteers on a second-and-goal from the two-yard-line has been pilloried as “the worst play call in the history of college football.”

I won’t go quite that far, but it certainly ranks among the worst I have seen in more than four decades of following Gamecock football …

Obviously, Satterfield and Beamer are exceedingly close. The two were graduate assistants together in the early 2000s at Tennessee under Phillip Fulmer. Just last week, their relationship on Rocky Top was the subject of a fawning puff piece by reporter Ben Portnoy of The (Columbia, S.C.) State newspaper that has aged poorly.

(Guess the fanboy problem seeps into that paper’s sports coverage, too …).

Portnoy found space in his tome to discuss both coaches’ golf handicaps as he heralded their “crucial recruiting responsibilities at Tennessee” and how they have now “graduated” to high-profile positions in the Southeastern Conference.

Still, Portnoy is bullish on Beamer and Satterfield’s future in Columbia, S.C. That or he is eager to have them continue returning his calls.

“There is a chance to rewrite the 2021 season,” Portnoy wrote this week. “Playing games against No. 20 Florida, No. 21 Texas A&M, Auburn and Clemson means possible upsets are feasible. Handle business against Vanderbilt and Missouri, and South Carolina could even backdoor its way into a bowl game with one other win. Maybe it happens. Maybe it doesn’t. At least South Carolina seems like it will turn over every playbook page and combination available to it to try and do so.”

Hold up … possible upsets are feasible? I guess that is true … technically. Although I wouldn’t bet on it given what “turning over every playbook page” accomplished (or rather didn’t accomplish) against Tennessee.

I am honestly not trying to be excessively critical here. As I have previously explained, though, I am not one of those Gamecock fans who believes in suffering mediocrity silently. Results come from accountability, people. Period. And while the leash on Beamer as a first-year head coach is indeed long, he might consider putting a choke collar on Satterfield’s play-calling for the duration of the 2021 campaign. Hell, if those “verbal abuse” allegations wind up being true, maybe Beamer could make it a “shock collar?”

One thing is clear, though: Something has to change … fast. Gamecock fans got spoiled by high-flying offenses during the Steve Spurrier era. To see such a sustained offensive collapse under multiple head coaches and coordinators points to a programmatic issue – one unlikely to be addressed without a long-overdue change at the top of the program.