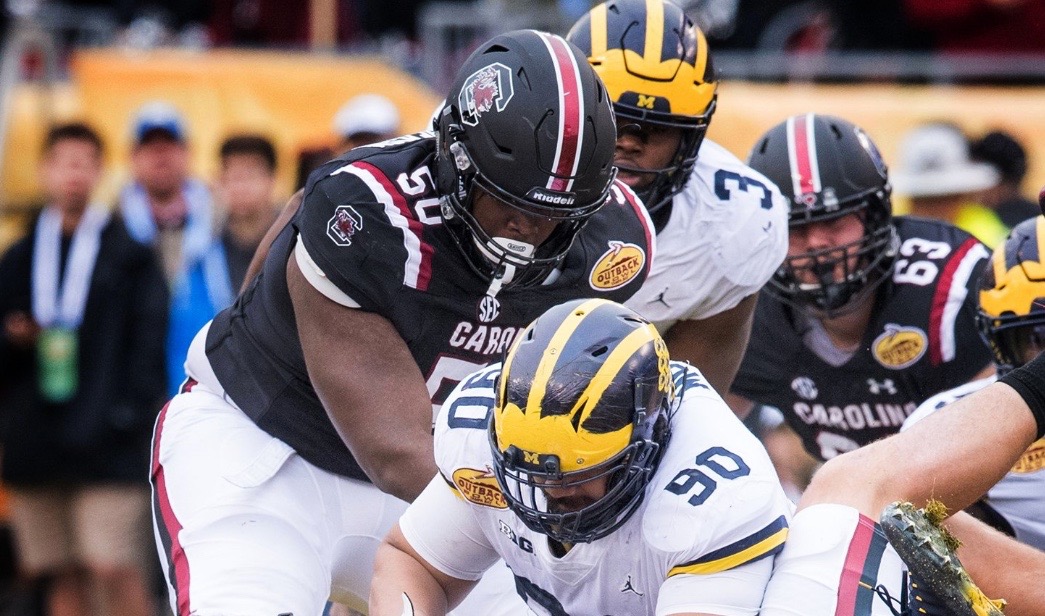 Maybe it was just a little of the old “black magic” returning.

Whatever it was, something lit a fire under the University of South Carolina football team in Tampa, Florida on New Year’s Day – allowing the Gamecocks to overcome a disastrous first forty minutes of play to win the 32nd annual Outback Bowl.

After being completely stonewalled on offense for the better part of three quarters, head coach Will Muschamp’s young squad reeled off 23 unanswered points in the game’s final seventeen-and-a-half minutes to claim an upset win over the Michigan Wolverines.

The Wolverines’ 26-19 defeat was the first bowl loss this season for the Big 10 conference – which entered the day with perfect 7-0 record.  It was also South Carolina’s fourth Outback Bowl win – and the Gamecocks first bowl victory of the Muschamp era.  Not bad for a team that many expected would post a losing record this season … and almost incomprehensible for a team that was totally overwhelmed on the offensive side of the football for the first two-thirds of the game.

The Gamecocks (9-4) entered the game as an eight-point underdog and for the better part of three quarters it certainly seemed as though the Wolverines (8-5) were going to cover the spread with room to spare.

With less than four minutes remaining in the game Michigan enjoyed a 19-3 lead – the last three points coming courtesy of a 48-yard field goal from sophomore kicker Quinn Nordin.  As he celebrated the made kick, Nordin turned toward the Gamecock sideline and grabbed his crotch – mimicking the move of Heisman Trophy winning Oklahoma quarterback Baker Mayfield.

Things went downhill for #GoBlue from there …

On the ensuing drive, South Carolina’s sputtering offense pick up its first third down conversion of the game – an 11-yard pass from sophomore quarterback Jake Bentley to sophomore tailback Rico Dowdle.  Two plays later Dowdle – who wasn’t even expected to play in the game after breaking his ankle earlier in the season – sliced through the stout Michigan defense for a 17-yard touchdown.

From there, third-year head coach Jim Harbaugh’s team completely unspooled.  A fumble three plays later led to a second Gamecock touchdown – this one coming on a leaping, twisting grab by sophomore wide receiver Bryan Edwards on a gorgeous post route.

South Carolina took its first lead of the game with 11:33 remaining in the fourth quarter on a gorgeous deep bomb from Bentley to true freshman wide receiver Shi Smith.

Both scores came against the nation’s top rated passing defense.

Michigan appeared poised to respond to the South Carolina surge but sophomore quarterback Brandon Peters was picked off in the end zone by Gamecock cornerback JaMarcus King – spoiling an eight play, 75-yard drive.  That was Michigan’s longest drive of the game.  For most of the afternoon, Gamecock defensive coordinator Travaris Robinson’s unit basically shut down Peters and the Wolverine offense.

Michigan finished with only 277 total yards and committed four offensive turnovers.  The Wolverines also muffed a punt that led to a Gamecock field goal late in the fourth quarter.

All five Michigan giveaways came in the second half.

After an atrocious start, Bentley’s final stat line was enough to earn him the game’s most valuable player award.  He completed 19 of 32 passes for 239 yards with a pair of touchdowns and one interception.  His top target was Edwards, who caught five passes for 88 yards including his acrobatic touchdown grab late in the third quarter.

All told, South Carolina put up 300 yards against the Wolverines – although it’s not clear whether interim offensive coordinator Bryan McClendon did enough during his audition to earn that job on a full-time basis moving forward.

With its ninth bowl win the Gamecocks should finish the season ranked among the nation’s Top 25 teams – the first time that’s happened since 2013.

This year’s game was a rematch of the 2013 Outback Bowl, a thriller won 33-28 by South Carolina on a 32-yard touchdown pass from Dylan Thompson to Bruce Ellington with just 11 seconds remaining on the clock.

Of course the 2013 game is best known for “The Hit” – a highlight reel, helmet-removing forced fumble caused by former Gamecock All-American defensive lineman Jadeveon Clowney.  The future No. 1 NFL draft pick won an ESPY award for the play, which propelled him to national stardom.

Prior to that game, Michigan and South Carolina split regular season games – with Heisman Trophy winner George Rogers leading the unranked Gamecocks to a 17-14 win in the Big House in 1980.  Rogers ran for 142 yards on 36 carries against the Wolverines that year.  Five years later, then-No. 15 Michigan exacted revenge with a 34-3 drubbing of the eleventh-ranked Gamecocks in Columbia, S.C.

Harbaugh was the Wolverines’ quarterback for that game, completing 12 of 22 passes for 164 yards.  He also ran for 45 yards and a touchdown against the Gamecocks.