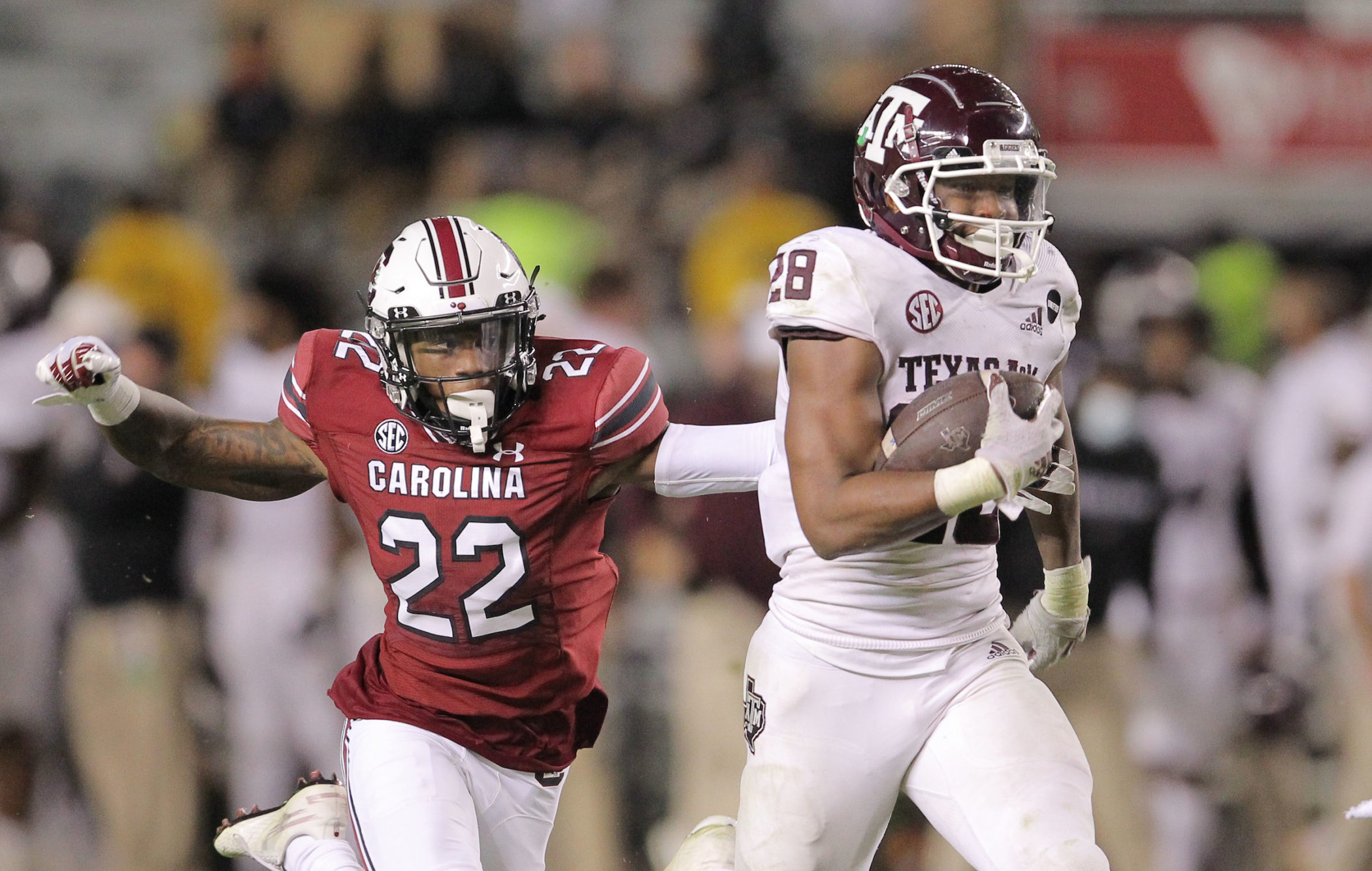 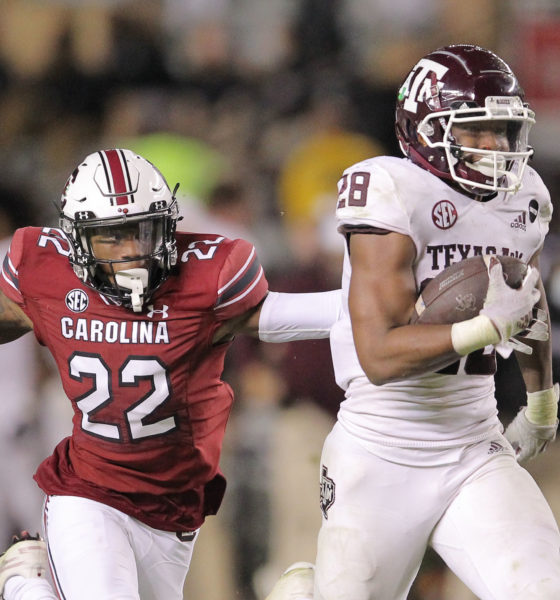 Freefalling program can’t afford to buy its way back to respectability, either …

A year ago, South Carolina head football coach Will Muschamp offered up an interesting take after his team absorbed a brutal 30-6 road loss to then-unranked Texas A&M – part of an ignominious 4-8 campaign that should have cost him his job.

“I plan on taking this program, really, where it hasn’t been before,” Muschamp told reporters following the humiliating defeat in College Station, Texas. “I really plan on doing that.”

Muschamp also claimed his program was “not as far off as people seem to think we are.”

A year later, however, Gamecock fans are confronting what many considered unfathomable at this point a year ago: Further regression.

South Carolina’s 48-3 blowout home loss to the No. 7 Aggies on Saturday night marked a new low for the beleaguered Muschamp – who only kept his job after last year’s mortifying campaign because the Gamecock athletics department could not afford to pay his massive buyout.

And still can’t (more on that in a moment) …

First, we need to address the utter embarrassment South Carolina football has become ever since former head coach Steve Spurrier decided to stop trying so hard after leading the program to three consecutive 11-win seasons from 2011-2013.

No one can argue Muschamp inherited a disaster when he took the reins of the program following the 2015 season. And no one can argue his first two years on the job exceeded expectations. Including ours.

“The guy has proven us wrong from day one … and momentum continues to trend in the right direction,” we noted after Muschamp led the Gamecocks to a nine-win campaign in 2017.

The problem? Three years later, the program is a disaster again – despite Muschamp successfully luring many talented players to Columbia.

Texas A&M head coach Jimbo Fisher – who was an assistant with Muschamp at LSU in the early 2000s – exposed the depth of the Gamecock freefall on Saturday night, putting an absolute ass-whooping on his former colleague.

On Muschamp’s home turf. On ESPN. After Muschamp and his staff had two weeks to prepare for the game …

It was the worst loss sustained by a South Carolina football team since 2016, Muschamp’s inaugural foray into the Gamecocks’ in-state rivalry with Clemson – a matchup which will not be played this season thanks to the Southeastern Conference (SEC)’s spineless scheduling move.

Of course that beat-down took place during Muschamp’s first season in Columbia … this one took place in his fifth.

Like last year’s defeat in College Station, South Carolina was dominated by the Aggies in every facet of this year’s game – which dropped the Gamecocks to 0-7 all-time against their permanent SEC western division foe (including an 0-5 mark under Muschamp).

With almost perfect balance (266 passing yards and 264 rushing yards), Texas A&M mercilessly exerted its will over the Gamecocks – including converting 12 of 16 third downs.

By contrast, South Carolina’s offense continued to backslide under first-year coordinator Mike Bobo – picking up only 150 total yards on eleven possessions. Graduate transfer quarterback Collin Hill completed an anemic eight of 21 passes for 66 yards with a pair of interceptions – although Hill was plagued (again) by his slippery-fingered receiving corps.

For example, on South Carolina’s opening drive of the game Hill hit junior wide receiver Jalen Brooks in stride on a deep route down the middle of the field – only to have the ball deflect off Brooks’ hands.

Hill was also unable to rely on a ground game – as South Carolina picked up just fifty yards on 25 carries against the Aggies’ defense. Sophomore tailback Kevin Harris – who entered the game averaging 107 yards per contest – was held to a season-low 39 yards on thirteen carries.

South Carolina’s overall performance on both sides of the football was so anemic that cascades of boos rained down on Muschamp and his players from the coronavirus-capped crowd of 16,253 at Williams-Brice Stadium. At one point, the Gamecock faithful even chanted for their head coach to be fired.

“I hope they’re pissed off, and that’s fine,” Muschamp said after the game. “The last two performances, I don’t think there’s any doubt they should be (upset).”

Social media was even more brutal – calling on Muschamp to be replaced by Liberty head coach Hugh Freeze, who led the Flames to their first ever bowl game last season and has the program undefeated and in the Top 25 for the first time ever this year.

Is Freeze really the answer, though?

The 51-year-old Oxford, Mississippi native resigned as head coach of his hometown Ole Miss Rebels three years ago amid a scandal involving phone calls he allegedly placed to an escort service.

Freeze posted a 39-25 record (including a 19-21 conference mark) during his five years in Oxford from 2011 to 2016, guiding the Rebels to back-to-back Top Twenty seasons in 2014 and 2015.  His program was the focus of a major NCAA investigation, however – one this website criticized for its seemingly selective enforcement.

Ole Miss was ultimately forced to vacate 33 wins from 2010 to 2016 in connection with that inquiry – including 27 of Freeze’s victories.


Assuming South Carolina identifies a promising coaching prospect, though, can it afford to part ways with Muschamp? While simultaneously paying a new coach a competitive salary?

That’s a ton of money for a school that entered the current year $168.8 million in debt (a rising tide of red ink which does not include an ongoing $22.5 million upgrade of Williams-Brice Stadium).

With this much debt – and revenues projected to decline by at least $58 million this year due to the impact of the coronavirus – South Carolina simply cannot afford to fire Muschamp.

Nor can it afford to hire the sort of coach capable of turning the program around … especially when its donors are wasting their money on frivolities like statues with no spurs.

Who do Gamecock fans have to blame for this debacle? Most of the onus falls on eighth-year athletics director Ray Tanner – who along with the school’s board of trustees hired Muschamp and inexplicably awarded him a raise and a contract extension after 2018’s underwhelming 7-6 campaign.

Oh, Tanner got an extension following that ignominious campaign, too …

Did either of them deserve it? No. That much has been made painfully clear over the intervening two years.

Since South Carolina’s disastrous showing in the Belk Bowl following the 2018 season, Muschamp has posted a 6-12 record. He is now 28-29 in his four-and-a-half seasons at the helm of the Gamecock program – including a 17-21 conference mark, a 3-15 record against ranked opponents and a 1-2 record in bowl games.

Still, Muschamp – who has struggled with criticism – believes he is the right man for the job at South Carolina.

“Our first three years of our tenure, we won more games than any other coach did in here and we are planning on continuing to have success here,” Muschamp said. “I think we recruited well. I think we have good players in our program. I’m disappointed in our last two outings.”

For Gamecock fans, though, such a response is a broken record … they heard Muschamp offer similar excuses last year.

Who else should we blame for the sorry state of affairs at South Carolina? The school’s board of trustees, which state lawmakers overwhelmingly reelected earlier this year despite previous promises to hold them accountable for the declining fortunes of the university and its athletics programs.

Of course rewarding failure and mediocrity is par for the course when it comes to governance in the Palmetto State … which is one reason we get so much of both.