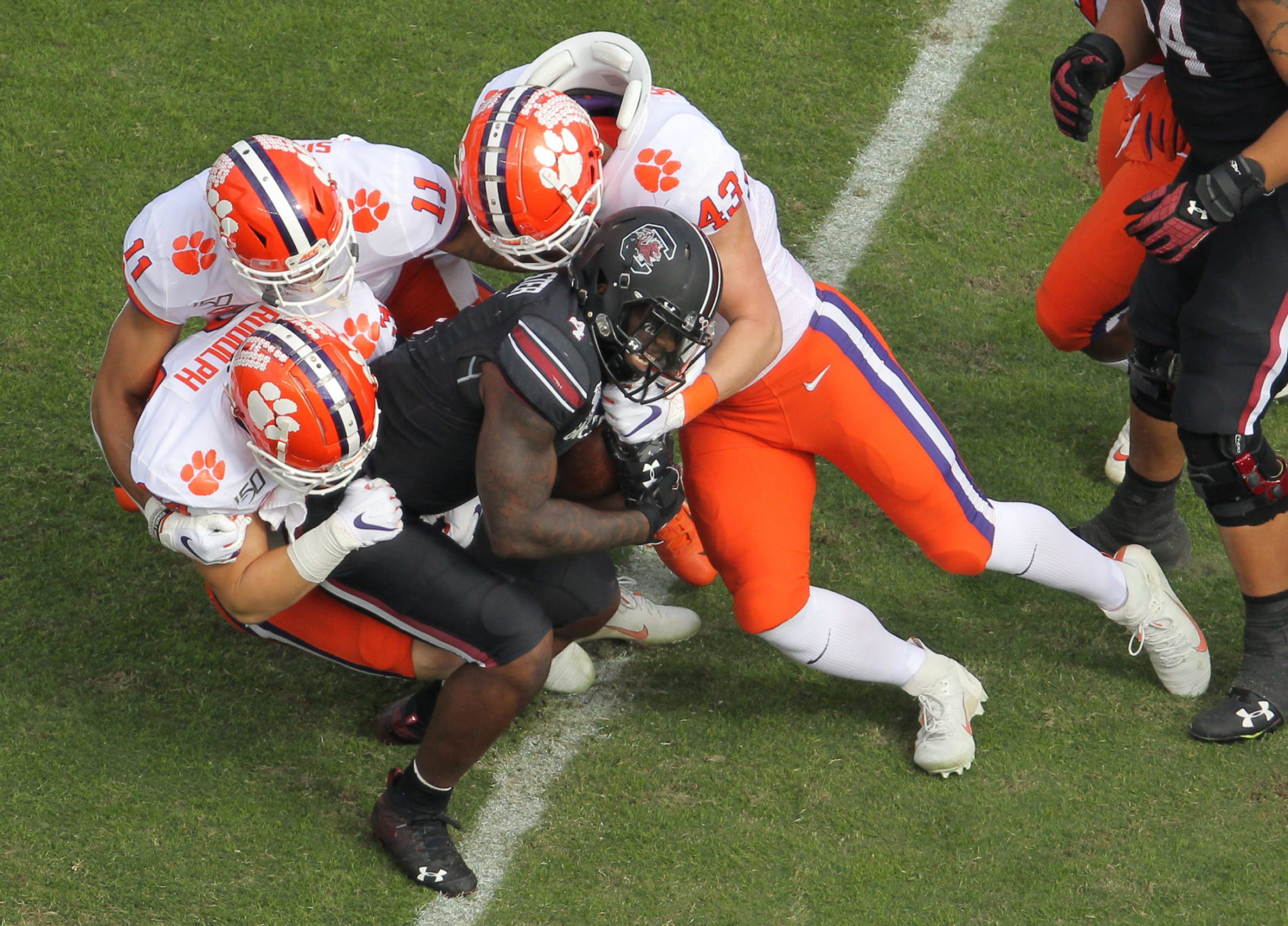 Clemson University’s defending national champion football team opened a can of whoop-ass on arch-rival South Carolina on Saturday … again. Adding insult to injury, the third-ranked Tigers did it inside an oranger-than-usual Williams-Brice stadium in Columbia, S.C.

With Tiger fans nearly outnumbering Gamecock fans in the stands (several thousand of which were empty), head coach Dabo Swinney’s squad stormed to its sixth straight victory in this annual series – dominating South Carolina 38-3 on a balmy November afternoon in the Palmetto State. The Tigers (12-0, 8-0 ACC) are now one win away from matching the longest winning streak in this 123-year series – a mark they set with seven straight victories from 1934-1940.

Of more immediate relevance, they are just one win away from appearing in their fifth consecutive College Football Playoff (CFP) – needing only to defeat unranked Virginia in the ACC championship game on December 7 in Charlotte, North Carolina to punch their playoff ticket.

Clemson won its sixth straight over the Gamecocks emphatically, rebounding from an early goal line stop by South Carolina’s defense to amass 527 yards against head coach Will Muschamp’s team – which continued to suffer from offensive anemia. For the second straight game, coordinator Bryan McClendon’s unit failed to find the end zone – and was held to a season-low 174 yards of total offense.

Plaguing McClendon (below) again? Third down … which saw South Carolina convert only five of fifteen attempts. Amazingly, that was slightly better than the dismal 32 percent conversion rate the Gamecock offense posted entering the game.

South Carolina (4-8, 3-5 SEC) scored just one touchdown in its final three games – and that came via a fourth down conversion following a penalty on an attempted field goal against Appalachian State.

“We’ve got to make some changes moving forward,” Muschamp said after falling to 0-4 against Clemson. “I’m not addressing anything as far as that’s concerned. Don’t ask.”

Muschamp continued to defend his performance as head coach at South Carolina despite the fact his “best” team finished with its worst record in his four years at the helm – and missed a bowl game for the first time since 2015.

“We’ve won as many games in the Southeastern Conference as any staff at the University of South Carolina – and I’m not happy with that, but I am just saying that is some positive progress for us to at least latch onto,” Muschamp said. “We went to more bowl games in our first three years than any staff in its first three years at the University of South Carolina, and we have a really good, young roster coming back.”

Despite the atrocious on-field results, Muschamp continues to enjoy the support of embattled athletics director Ray Tanner and new school president Robert Caslen. He also has a massive buyout that would set the athletics department back more than $18 million were it to fire him.

In other words, Muschamp will be back in Columbia, S.C. for at least one more season … whether Gamecock fans want him back or not.

“I look forward to having a long tenure here at the University of South Carolina and coaching here for a long time and getting this thing turned,” Muschamp said. “I look forward to the opportunity and the challenge.”

Muschamp (above) grew testy when questioned about his teams’ ongoing offensive lethargy – which doomed him during his stint as head coach at Florida from 2011-2014. The 48-year-old Rome, Georgia native posted a 28-21 mark in Gainesville – slightly better than the 26-25 record he has posted at South Carolina.

“No one was bitching last year when we averaged 425 yards and over thirty points a game,” Muschamp said. “We’ve struggled this year. You know, just call it like is. There are a lot of different areas that are at fault and it needs to get fixed and that’s what I’m going to do.”

While Muschamp and the Gamecocks were busy sifting through the detritus of a season in shambles, Swinney and the Tigers were celebrating more history-making dominance. In capping their third undefeated regular season in the last five years – and extending college football’s longest active winning streak to 27 games – the four-time defending ACC champs saw tailback Travis Etienne make history.

The 5-foot-10, 210-pound tailback from Jennings, Louisiana was limited to a season-low 51 yards rushing against the Gamecocks, but he found pay dirt twice – breaking the ACC record for rushing scores (53) and touchdowns from scrimmage (57) set by former Pitt star James Connor.

Etienne didn’t need to have his best day with sensational sophomore quarterback Trevor Lawrence (above) rounding into form. After an uneven start to the season, the 6-foot-6, 220-pound Cartersville, Georgia native completed his fifth straight game without an interception – connecting on 26 of 36 passes for 295 yards and three touchdowns.

Speaking of ACC records, Lawrence completed a record-tying 18 passes in a row against the Gamecocks.

In addition to his aerial exploits, Lawrence also led the Tigers with a career-high 66 rushing yards – giving him 317 rushing yards on the season. Most importantly to Tiger fans, he moved to 23-0 as Clemson’s starting quarterback after taking over for Kelly Bryant after the fourth game of the 2018 season.

Swinney told reporters after the game that he couldn’t help but express his admiration to the second-year signal-caller, who turned 20 years old last month.

“Man,” he said he told Lawrence, “it’s just so much fun watching you play quarterback.”

Higgins (above) caught three passes for 101 yards – including a pair of touchdowns. The 6-foot-4, 215-pound junior broke the game open with a 65-yard touchdown reception from Lawrence with just under four minutes left in the first quarter.

Higgins finished the regular season with 43 catches for a team-leading 900 yards and ten touchdowns. Ross led the Tigers with 52 catches for 648 yards and seven scores.

South Carolina’s offense will miss him next year … just as it clearly missed former Gamecock great Deebo Samuel this year.

There’s No “Bullying” In Football