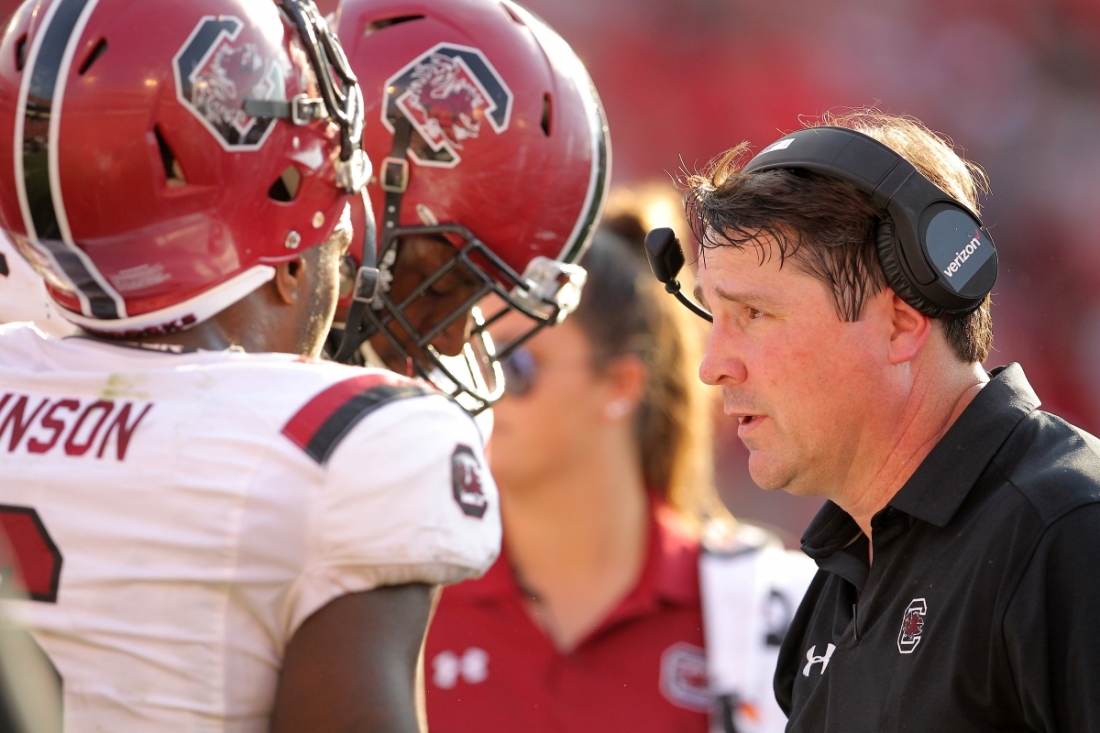 This news site wasn’t especially enthralled when Will Muschamp was hired as the head football coach at the University of South Carolina in December of 2015.

Despite having a jumpstart on its coaching search thanks to the October 2015 resignation of former head coach Steve Spurrier, it seemed as though athletics director Ray Tanner allowed several better options slip through his fingers.

One of them?  Kirby Smart.

The former Alabama defensive coordinator was reportedly discussing terms with Tanner when his phone rang … with Georgia on the line.

Smart took the Georgia offer (and after an 8-5 season in 2016 he led the Bulldogs to the national championship game last season).

His post-jilt recommendation to Tanner?  “Hire Will Muschamp.”

That’s who Tanner hired … and through two seasons Muschamp has put up a workmanlike 15-11 mark (including an 8-8 record in the Southeastern Conference).  Muschamp is 1-1 in bowl games, but 0-2 against Clemson and Georgia.

Still, when you consider the dumpster fire he inherited two-and-a-half-years ago – Muschamp deserves tremendous credit.  He staved off what could have been a recruiting disaster during his first few months on the job, assembled a solid coaching staff around him and his teams have shown steady improvement in the only metric that matters: Wins and losses.

Momentum is with him, too, as the Gamecocks enter 2018 with an opportunity to take another big step forward.

On offense, superstar wide receiver/ special teams threat Deebo Samuel returns to the lineup after missing the final ten games of 2017 with a broken ankle.  That should help alleviate the loss of first round NFL draft pick Hayden Hurst – a clutch performer and a favorite target of junior quarterback Jake Bentley

With twenty career starts under his belt, Bentley will enter 2018 under the tutelage of first-year coordinator Bryan McClendon and quarterbacks coach Dan Werner – who was brought in from Ole Miss to elevate the Gamecock passing attack.

Clearly Muschamp isn’t going to let poor offensive play – which cost him his job at Florida – be his undoing at South Carolina.

Last season’s sacks leader D.J. Wonnum is back, as are linebackers Bryson Allen-Williams and T.J. Brunson.   Then there’s Josh Belk – a highly touted defensive line prospect who bolted Clemson back in May to come play for Muschamp.

In addition to returning plenty of talent, South Carolina has a favorable schedule.  Assuming the Gamecocks can overcome their “Bluegrass Blues,” a 10-2 regular season (presuming losses to Georgia and Clemson) isn’t at all out of the question.

Frankly, that would be nothing short of amazing given how far this program fell off the map in 2015 …

Under Spurrier, South Carolina was ranked among the nation’s top 25 teams for a school-record 69 consecutive polls beginning in September 2010.  After a 21-20 loss to Missouri on September 27, 2014, though, the Gamecocks were bounced from the Top 25 – and didn’t return until last November.

They finished the 2017 campaign just outside of the Top 25, but are likely to be included in the 2018 preseason rankings.

Credit where credit is due: Muschamp.

Basically, the guy has proven us wrong from day one … and momentum continues to trend in the right direction.

In fact, Muschamp has been so successful that we’re told Smart has confided to several of his intimates that he wished he had “given Tanner another name” for the vacant South Carolina head coaching job.