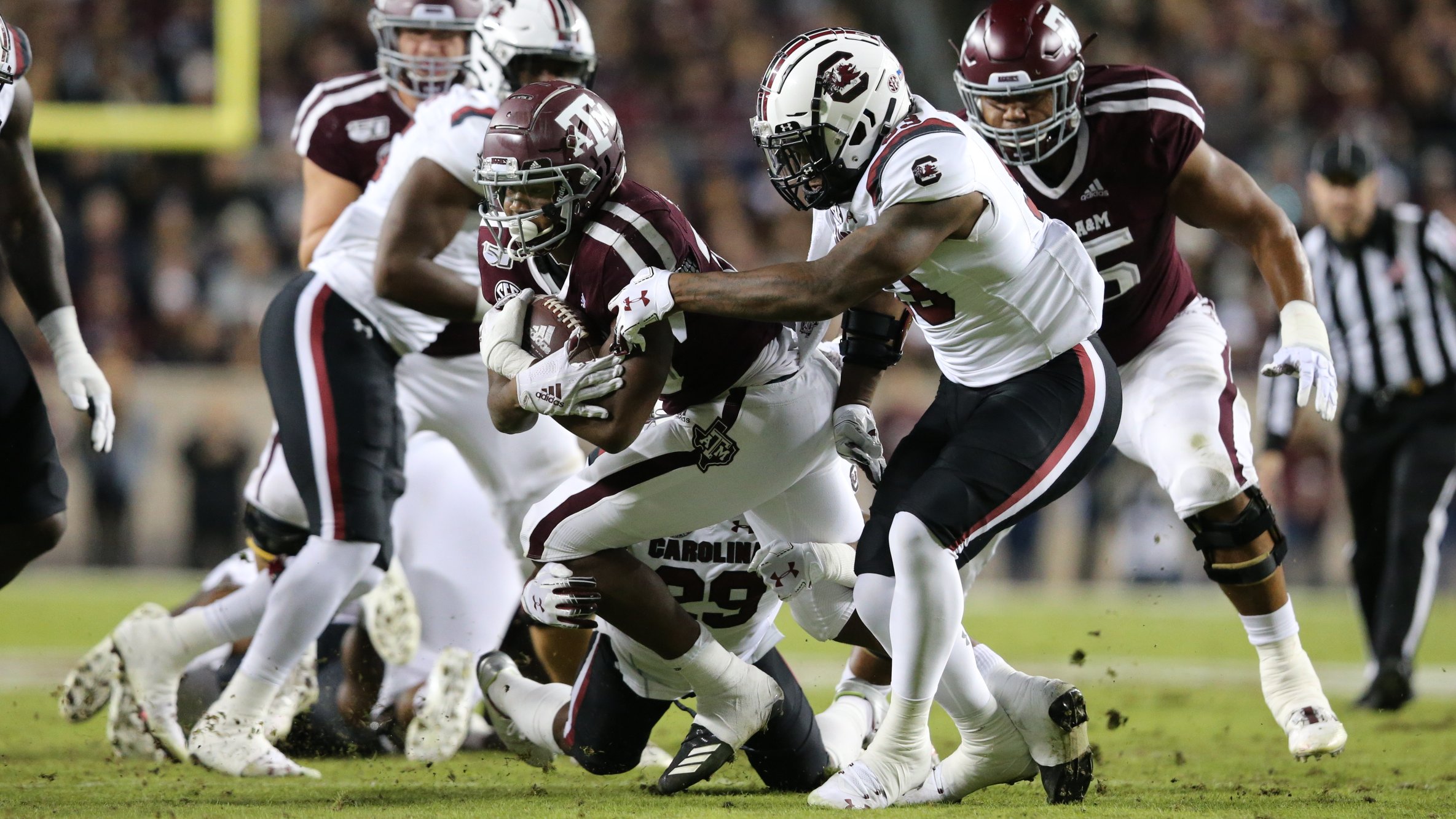 How did Muschamp’s team respond?

By rolling over and dying …

Just when Gamecock fans didn’t think their season could get any worse … suddenly it did.

Still, Muschamp – who is unlikely to be fired given his massive $22 million buyout – insisted great things were just over the horizon for long-suffering Gamecock fans, who have seen their program collapse after getting a taste of national prominence under former head coach Steve Spurrier.

“I plan on taking this program, really, where it hasn’t been before,” the 48-year-old coach said after his team fell 30-6 to Texas A&M, a loss which guaranteed its second losing season in his four years at the helm and knocked the Gamecocks out of bowl eligibility for the first time since 2015 (and only the third time in the last fifteen years).

“I really plan on doing that,” Muschamp added.

Despite a valiant effort by its defense during the first three quarters of Saturday night’s game against the Aggies, coordinator Bryan McClendon’s unit could get absolutely nothing done offensively – gaining only 260 yards and going an abysmal 2-for-15 on third down.

South Carolina now ranks No. 114 (out of 130 FBS teams) in third down conversions.

Freshman quarterback Ryan Hilinski (above) – who took over for an injured Jake Bentley after a deflating season-opening loss to North Carolina – had arguably his worst game under center, completing only 16 of 41 passes for 175 yards (an embarrassing 39 percent completion percentage).

And this time there would be no unsympathetic newspaper headline controversy to deflect attention away from his clear regression since taking over the starting quarterback job two-and-a-half months ago.

Criticized for overthrowing receivers on deep routes all season, Hilinski couldn’t hit the proverbial broad side of a barn door on Saturday evening – including numerous incompletions in which it was clear he and his receivers were simply not on the same page.

Hilinski’s errant arm and a nonexistent ground game spelled doom for South Carolina – which waited until its next-to-last drive of the game to call upon redshirt freshman quarterback/ wide receiver Dakereon Joyner to run the offense.

Joyner didn’t last long, though, getting knocked out of the game on a vicious hit while attempting to convert a fourth down.

The lone highlight of the night for South Carolina?

In addition to punishing the football with his right leg, the fourth-rated kicker in the country converted a fluke fourth down play by tucking the football and scrambling for ten yards after his protection broke down.

Embarrassingly, thanks to that one play Charlton finished the game as South Carolina’s second-leading rusher.

By contrast, Texas A&M had a pair of 100-yard rushers as it defeated South Carolina for the sixth time in six tries since become the Gamecocks’ permanent SEC West opponent in 2014.

A week after gaining only 21 yards on the ground against Appalachian State, South Carolina was limited to just 45 yards against the Aggies – ten of them coming on Charlton’s aborted punt attempt. On called running plays over the last two games, South Carolina has gained a mere 56 yards on 43 attempts – an embarrassing 1.3 yards-per-carry average.

Amazingly, Muschamp maintains the program is “not as far off as people seem to think we are.”

“We’ve got the resources available now, as far as our facilities are concerned,” he said after the game. “We’ve got the support we need to be successful. We’ve always had the support we need to be successful and we’re not as far off as people seem to think we are and that’s the most frustrating part for us. You get into a rut, from a confidence standpoint, which is where we are now.”

Muschamp’s rut keeps getting deeper, though. After a 9-4 season in 2017, the Gamecocks seemed poised for big things last year against a relatively friendly schedule. They dramatically underperformed expectations, though – punctuated by a humiliating shutout defeat against Virginia in the 2018 Belk Bowl. This year’s schedule was arguably the toughest in the nation, but there was still a clear path for the Gamecocks to go bowling – especially after an upset win over No. 3 Georgia in mid-October.

South Carolina has gone 1-4 since upsetting the Bulldogs, though, and will likely finish 4-8 on the season when arch-rival Clemson comes to Williams-Brice stadium on November 30 in search of its sixth straight win in this once-competitive series.