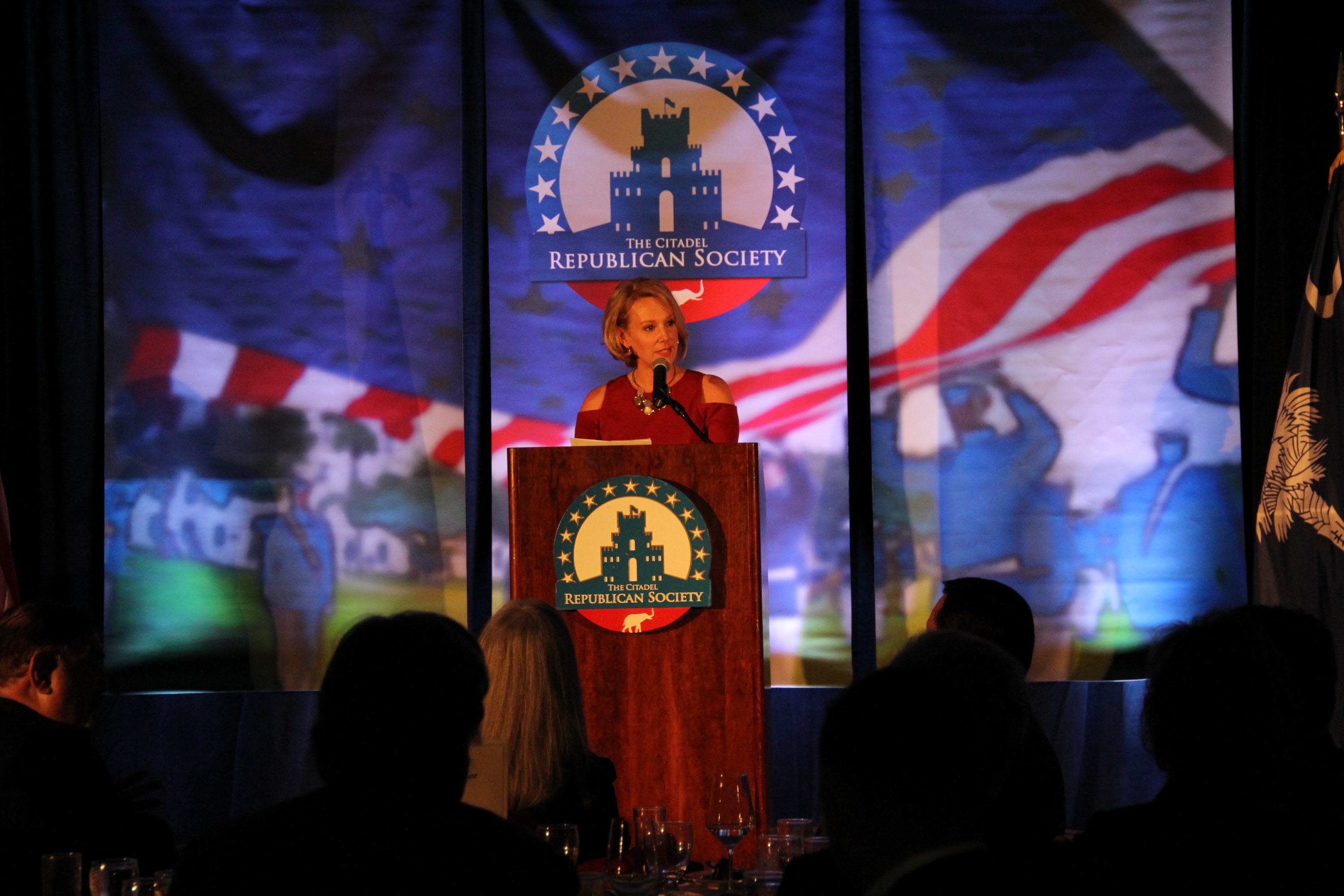 This is Politics 101.  It’s the same everywhere.  In every race.  The only difference in South Carolina is the “defining” process tends to be far less genteel than it is in other states.

The 2018 GOP primary for governor is likely to be no exception.  Incumbent “Republican” Henry McMaster – who should be cruising to victory after being gifted his office by U.S. president Donald Trump – is instead struggling mightily to gain traction.

Most significantly, McMaster has been dogged by his proximity to an ongoing, multi-jurisdictional criminal investigation targeting the empire of his longtime political Svengali, veteran “Republican” strategist Richard Quinn.  While the guffawing, glad-handing caricature of an old-school southern politico has yet to be implicated in the mushrooming #ProbeGate scandal, Quinn and several of his allies have been indicted on corruption charges – and McMaster (below) has been accused of looking the other way and covering for this corruption during his eight years as the state’s attorney general.

Intelligent, attractive, articulate and politically savvy, Templeton is the real deal.  She has dramatically outperformed expectations in terms of fundraising – while proving her ability to go toe-to-toe with McMaster’s mud-slinging political operatives.

Strategically, Templeton has also been making all the right moves.

Sensing an opportunity to make major political hay (and eager to blunt any positive impact from Trump’s ongoing support of McMaster’s candidacy), Templeton’s campaign has made a major pivot in the last few weeks.  She has tacked hard to the right and embraced a virulent strain of political populism – looking to position herself favorably in contrast to her scandal-scarred rival.

Her social media accounts have been flooded with references to “draining the swamp” in Columbia, S.C. – and she’s stepped up her attacks on the state’s status quo (a.k.a. McMaster and his allies) at recent campaign stops.

Supporters of the aspiring governor say her campaign isn’t grandstanding.  They say Templeton is offering substantive ethics reform proposals in response to a “culture of corruption” at the S.C. State House – which is true.

In fact we reported on Templeton’s proposals earlier this month …

But Templeton’s recent embrace of conservative firebrand Steve Bannon is another matter entirely.  It’s a clear shot across the bow of the moderate “Republican” establishment to which many believed Templeton belonged.

More than that, it’s invitation to assess the legitimacy of her newfound swamp-draining zeal. 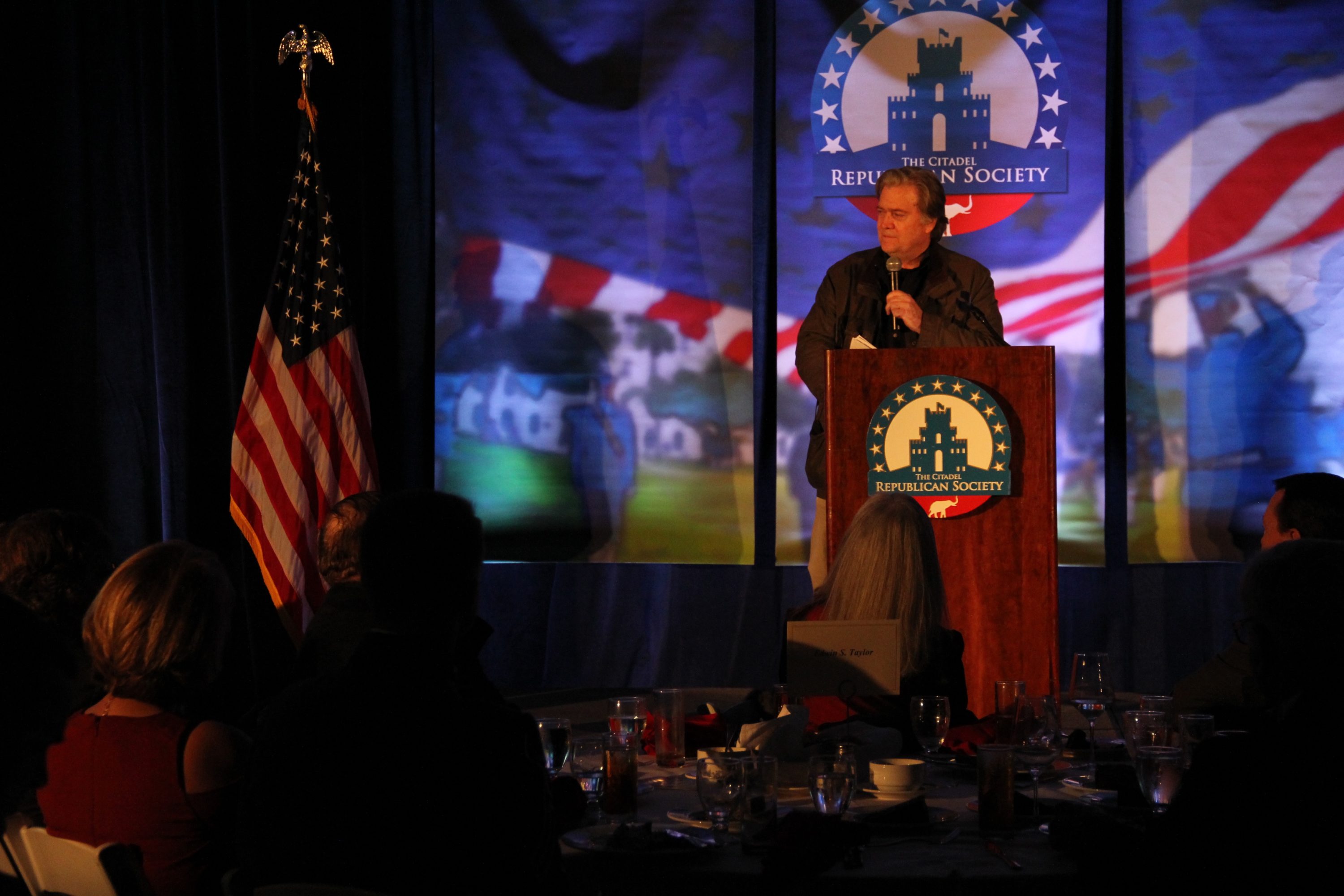 Bannon (above) – whose aggressive nationalism this news site has written favorably of in the past – is the arch-enemy of the “Republican” establishment in America.

After leaving the White House in August, the former Trump strategist has reassumed his position atop the conservative media empire known as Breitbart News.  In that role, he’s becoming the leading advocate for replacing fiscally liberal “Republicans” in Washington, D.C.

Bannon has vowed to recruit primary challengers to every incumbent “Republican” U.S. Senator – except for Ted Cruz of Texas.  We support him in those efforts, too … enthusiastically.  The liberal wing of the GOP has been killing this country for decades, and a purge of the sort envisioned by Bannon is long overdue.

Not surprisingly, liberal GOP leaders have vowed to fight back.

Just last month, The Washington Post reported that a political action committee led by wildly unpopular Senate “majority” leader Mitch McConnell was making plans to “highlight Bannon’s hard-line populism and attempt to link him to white nationalism to discredit him and the candidates he will support.”

The group said it planned to “spend millions” on its efforts – which essentially parrot the liberal Democratic narrative against Bannon.

McConnell has been a supporter of Templeton in the past, meeting with her in his U.S. Capitol office when she was being offered a post on the National Labor Relations Board (NLRB).

This was right around the time Templeton was jumping on board the presidential campaign of uber-liberal “Republican” Jeb Bush – one of the many establishment GOP politicians who was crushed by the same strain of populism Templeton is now embracing. 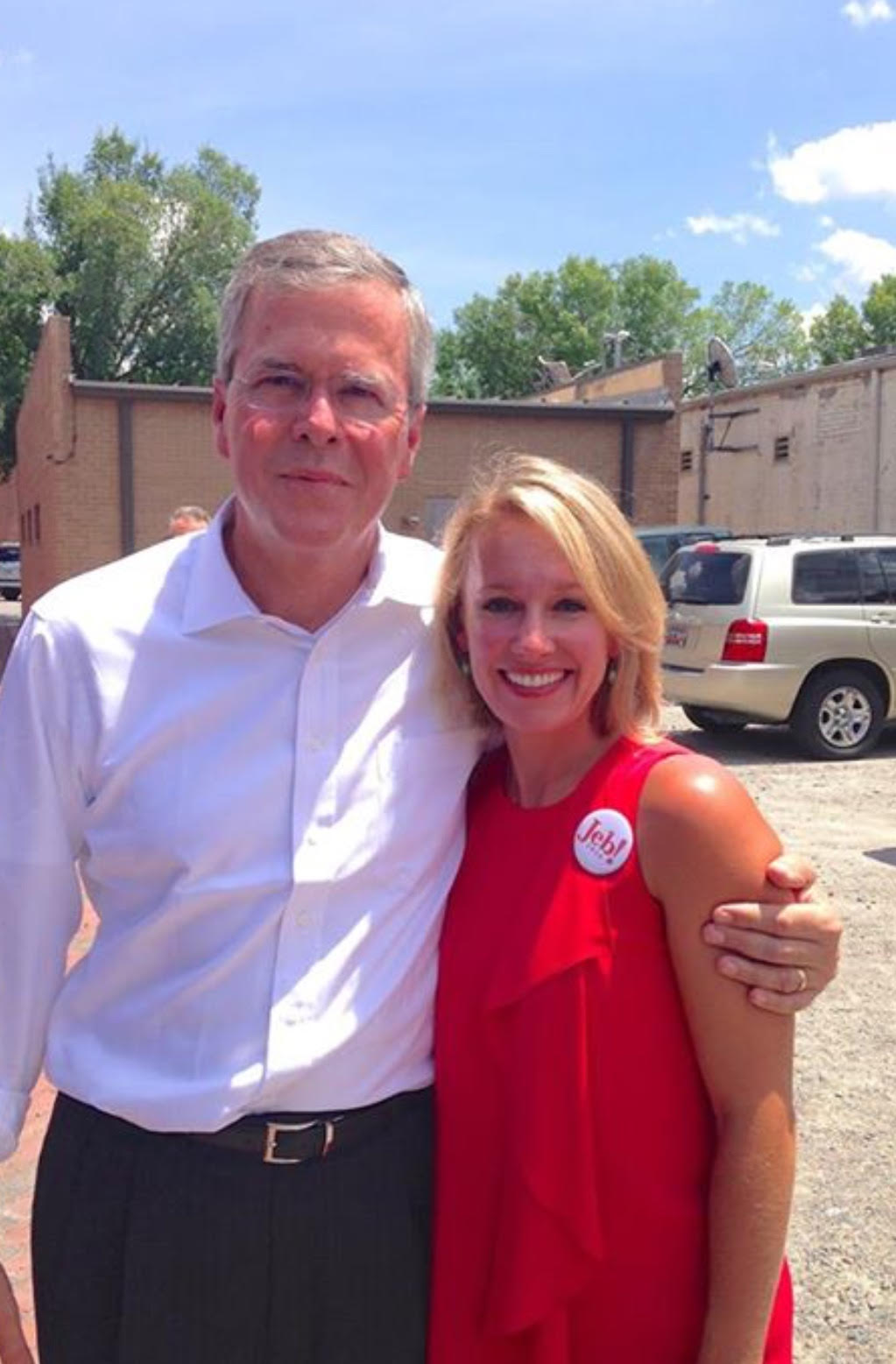 “I thought she liked this guy?” one Lowcountry Republican politico told us, referring to Templeton’s prior affinity for Bush.

Templeton did indeed like Bush in the not-too-distant past.

“Jeb is a statesman who actually produces results,” she said a little over two years ago in endorsing Bush’s candidacy.  “He has cut taxes, created jobs, and reformed government.  There are very few leaders in our country right now that have the experience, vision, and courage of Jeb Bush.  His strength will bring opportunity to everyone.”

The only “opportunity” Bush’s campaign brought was to establishment GOP political operatives, who made millions off of his failed bid.

As Bush’s fortunes began to fade, Templeton went on the warpath for him – blasting Trump for misogynistic rhetoric as the “First in the South” presidential primary approached.

“There are leaders all over South Carolina, especially women leaders, who are looking at the rhetoric and antics of Donald Trump, and are being turned off,” she was quoted as saying in a January 2016 release from Bush’s presidential campaign.

Ultimately, none of it mattered.  Trump rolled in South Carolina, and Bush was forced to drop out of the race after his embarrassing fourth-place finish in the Palmetto State.

This news site made no secret of its disappointment in Templeton at the time.

“To see her hitch her wagon to such a liberal establishment ‘Republican’ (has) perplexed us,” we wrote last winter.  “Vexed us, even.”

Now, though, Templeton’s wagon seems to be moving in the opposite direction.

During the Bannon’s high-profile visit to The Citadel this week, Templeton seized a starring role – introducing the arch-conservative to the crowd and appearing alongside him at a roundtable for black businesses held prior to Bannon’s speech.

Templeton took heat from Palmetto State Democrats for her proximity to Bannon, while her gubernatorial rival McMaster reportedly “lost his mind” when informed of the arrangement. 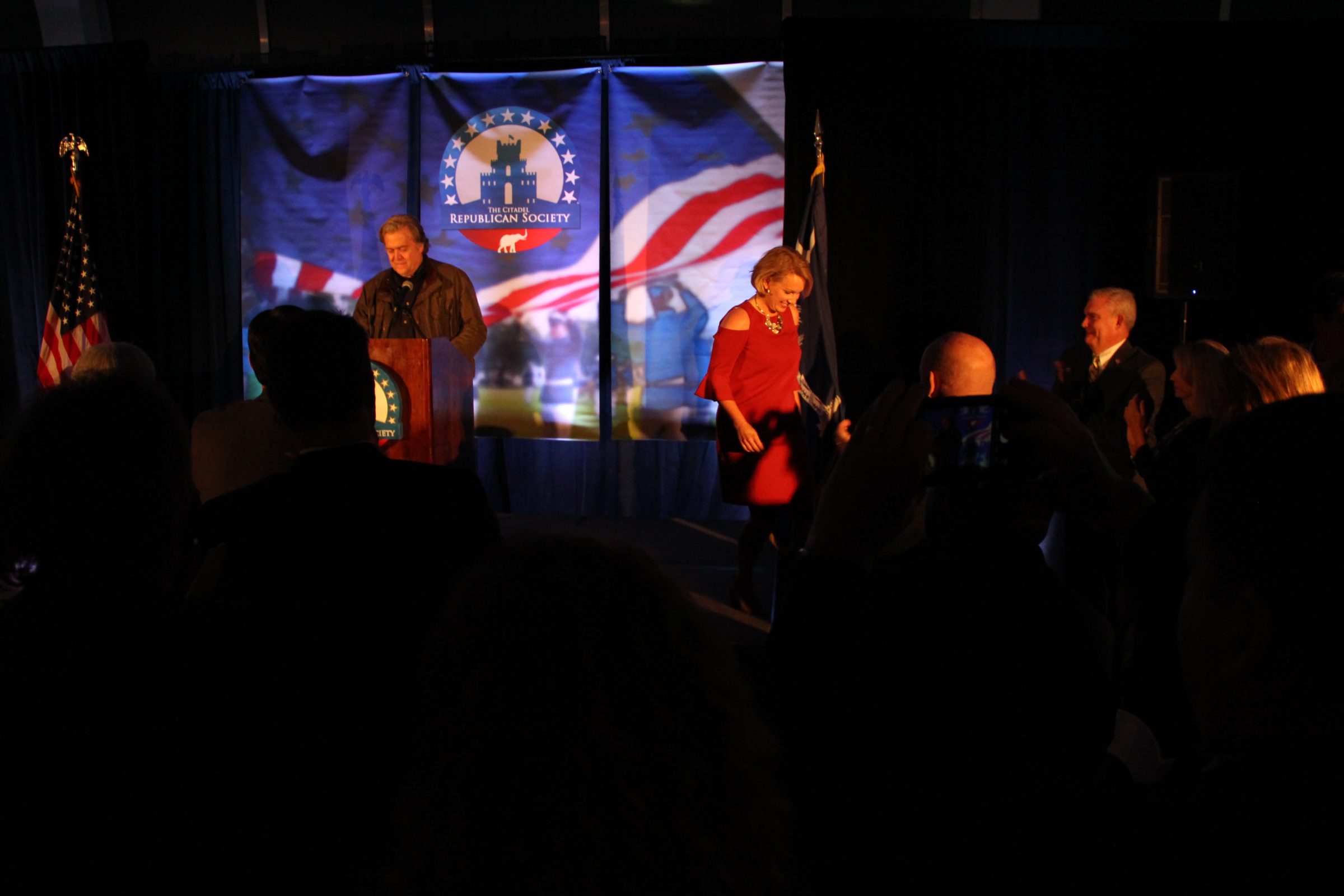 He wasn’t the only one who was infuriated …

“Shit like this is why she has to be destroyed,” one national GOP operative supporting McMaster told us, referring to Templeton’s love-fest with Bannon. “She’s a goddamn shape-shifter.”

Invoking our reporting from late last month, the operative assured us that Templeton would indeed be destroyed during the course of the upcoming primary election – adding another thinly veiled reference to the so-called “thermonuclear” weapon several McMaster donors claim they plan to detonate on their upstart rival.

“She’s worse than Nikki Haley ever was,” the operative continued, referring to the one-time Tea Partier who evolved into a big-spending, status quo “Republican” and leader of the national #NeverTrump movement.

It’s clear Templeton’s political orientation has undergone a radical reorientation over the past few years – raising legitimate questions as to whether her populist rhetoric is the real deal or rank political opportunism.

As long as Templeton continues to “evolve” in the right direction, though, we’re not going to complain too much – especially if she continues to accompany her rhetoric with credible policy initiatives (which she’s done consistently at this early stage of the race).

McMaster is a disaster, and if Templeton can continue to provide a credible alternative to his ongoing failure then we will continue to view her candidacy in a favorable light.

Having said that, we will continue to point out her weaknesses when we see them … and her prior support for the very GOP establishment she is now attacking is indeed a weakness in our book.