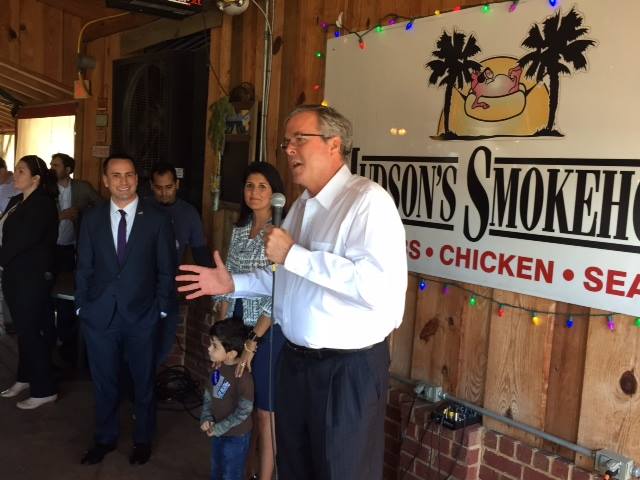 The former director of the S.C. Department of Health and Environmental Control (SCDHEC), Templeton is widely praised for turning that antiquated bureaucracy around – saving taxpayers millions of dollars in the process.  She’s also viewed as a leading candidate for statewide office in 2018.  And organizational genius and adept messenger, Templeton is also exceedingly well-connected with the state’s business community – all skill sets which lend themselves exceedingly well to a statewide campaign organization.

Bush’s ability to earn her endorsement is a coup … especially after several rival 2016 campaigns reportedly made aggressive pitches in an effort to land her support.

“Jeb is a statesman who actually produces results,” Templeton said according to a copy of Bush’s announcement provided to FITS.  “He has cut taxes, created jobs, and reformed government.  There are very few leaders in our country right now that have the experience, vision, and courage of Jeb Bush.  His strength will bring opportunity to everyone.”

“Its fair to say that the rest of the country views South Carolina as a consultant state,” one Bush advisor told us, “but having lived here for ten years and being involved in a number of campaigns I believe South Carolina is a candidate state. Candidates win campaigns not consultants.”

Bush supporters recently announced raising nearly $115 million between the campaign and the “Right to Rise” super-political action committee (a.k.a. “Super-PAC”) – which is backing Bush’s efforts.

“Jeb and the campaign are committed to spending the time in South Carolina to run what will be more like a governors race than a presidential primary,” the advisor added. “We have a detailed plan that is aggressive, methodical and measured. We are building a campaign organization that will be unrivaled and we will have significant resources to do what it takes to win.”

Early polls have shown Bush and Wisconsin governor Scott Walker emerging as the two early frontrunners in South Carolina, which host the nation’s “First in the South” presidential primary every four years.  Of course those polls were taken before the rapid, recent rise of billionaire real estate mogul Donald Trump – whose war with the Mexican government (and the politically correct police here in America) is going swimmingly.

Bottom line?  Whether it’s against another establishment “Republican,” a Tea Party favorite or a well-funded, filterless candidate like Trump, Bush has a huge fight on his hands in South Carolina …

At this point in time I will go with Trump

Derp! (what “I will go with Trump” sounds like to normal people)

Me too! Trump is the only one saying what needs to be said who has the spine and the balls to do what needs doing to fix this country. Rand would be my second choice after Trump. Unfortunately Rand, like his daddy, will be pushed onto a back burner by the establishment Republican Party. Trump has the means to make the party eat shit and be grateful they are being fed, if he chooses. He didn’t get as rich as he is by being a dumbass.

Poor guy. The racists that make up the republican voter base in SC won’t like his views on immigration (or his Mexican wife). They’ll go with the phony Trump, even though he won’t make it to the primaries. Such a dilemma…

That’s the same republican voter base in SC that elected Haley, Scott and Graham.

And the same base that voted for W rather than chose a man with an illegitimate black child (McCain).

For the upcoming Republican debate, I want every candidate included and then make it a locked cage, no holds barred, death match to the very end. Then I might get interested and watch.
The last good death cage match I watched was between the ‘Undertaker’ and ‘Doctor Death.’

“erneba” sounds vicious today — are you a ‘true descendant’ from the nightmare-causing creature commonly known as the “Carnauba Terror from Brazil”?

The “Carnauba Terror from Brazil” was known to ‘wax poetic’ at times when he was not destroying his opposition in the locked-down death cage.

Presidential Politics… has been for the last six months…will be for the next sixteen months… I am waiting for the first candidate to say..”awww go f*ck it!” That just might be my favorite.

Once again the conservatives have to coaless around one candidate or we will do another 2008 or 2012. These mushy middle moderate establishment candidates are an open invitation to the Dims. We need Scott Walker as our candidate . A true , proven conservative. We have to join together as conservatives or lose. It’s just that simple.

Scott Walker? Remember that time he thought he was on the phone with David Koch and he all most pissed all over himself, and it turned out to be a joke by a radio talk show. He stepped out of an important meeting, where he was supposedly doing his job to take the call, as I recall. What a dumb ass.

Yes sir, Mr. Koch, Whatever you say Mr. Koch. Right away Mr. Koch. How high Mr. Koch? Can i wash your ass Mr. Koch? If you want a Koch Brother for President, why don’t you ask one of them to run. Why elect a servant?

You are right, Walker is looking better every day. Still a long haul ahead for the front runners, but in the end, any Republican over HRC.
The mushy middle gave us eight years of this terrible Obama Presidency.

“conservatives have to coaless around one candidate”

You mean, tie them to a post and pile burning coals around their feet?

Iran just got a deal from Obama that encourages terrorism and the mass nuclear bombing of innocent people. The federal gov’t is collecting taxes from the people at a RECORD amount, and still in a deficit. And you’re jerking off because YOUR GUY (the guy Democrats want) has found some lackeys.
If you ever wonder why the country is in such a mess, this is why.

You have Grand Tango”s voice.

I presume the candidates are still competing for the coveted Todd Kincannon endorsement, right?

But is this latest Folks’ fixation a rock star?

I predict she will go further than T-Rav or Nancy Mace. Jeb will see to that.

I presume Folks has objective evidence of the “millions” of taxpayers dollars that Templeton has saved. Right?

I wonder if when Will is deposed in the Bingham lawsuit if the Bingham attorneys will ask him if he has ever been paid or otherwise compensated to provide positive coverage or a particular slant to a story?

His 180 on Tempelton sure begs the question

Looking forward to that! Eager to answer that question. As for the millions saved, here’s one example … https://www.fitsnews.com/2013/01/08/scdhec-saves-46-million/

So answer it here, have you ever been paid money or compensated with anything of value to yourself, your family or friends, or your website (to include a promise of insider information) in exchange for posting a particular story or pushing a particular slant on a story or person. Have you collected monies or anything or value from anyone while acting on their behalf while posting stories or information on your website about them without disclosing same?

Question for our “Founding Editor” – if Catherine Templeton is so smart, why is she tying herself to Jab?

Who should she tie herself to? Jeb is odds-on favorite to win the nomination.

“Who should she tie herself to? ”

She could tie herself to me, or just tie me up.

How soon we forget. With this kind of “logic”, Jimmy Carter could easily win if he ran for a second term.

No kidding, it’s like tying your foot to a cinder block and shoving it into the lake.

The GOP big boys, who back Bush, note and reward loyal foot soldiers and entry-level officers (look a papa Bush’s career). She will gain important RNC and SC GOP chits even if Bush fails

you people HAVE NO CLUe. do you idiots really spend all your time on this website, following fake politricks and you still have NO CLUE? once jeb wins NH then he will come to SC with the bulk of his 115million$ war chest. he will easily buy the SC primariy- th SC republican voter is the most conditioned and susceptible to bought and paid for propaganda. bush will easily win SC. THEN IT’S OVER. after bush wins NH and Sc all republicans will fall in line. its weird you people think you know politcs but havent figured this out. its so obvious. then he’ll use the exact same formula his brothr used:45% hispanic vote support and will win white house. if he doesnt have the votes his daddy’s people will figure out a way to hand it to him (florida 2000 ohio 2004). but after NH and SC- when bush wins both- THE PRIMARIES ARE OVER. the fake media is pimping trump so the sheeple are a bit confused right now, but anyone with a clue knows what will happen. not surprisingly, no one on this site as figured out the obvious yet.

Pretty close to being true. Jeb COULD buy the Republican primary.. so many Democrats do vote in it.

We got the idea from Rush Limbaugh.

There is about a 99% chance that you are right, but Trump has the ego and money to POSSIBLY (1%) upset the coronation such that someone else (Walker, Rubio, et al) actually runs up the middle (strategically speaking) and gets the nod.

A new Suffolk University/USA TODAY national poll finds Donald Trump leading the Republican presidential field with 17%, followed by Jeb Bush at 14%, Scott Walker at 8%, Ted Cruz at 6%, Marco Rubio at 5%, Ben Carson at 4%, Mike Huckabee at 4% and Chris Christie at 3%.

I wonder if Nikki is dreading the early primary? If she doesn’t endorse the eventual winner of the Republican Primary she may not get the trip to Washington that she wants.

Read my lips, NO MORE SCUM-SUCKING, GLOBALIST, BUSH!!!!!
If the Republican Party wants to hand the Presidency over to the Democrats for another eight years, go ahead and nominate Bush. We are tired of lukewarm toadies who carry the banner for the NWO and the Democrats. If that is all we get, we may as well elect a Democrat. Hell, why not run Obama’s dog, Boehner while you’re at it?

Haley’s fat face is in the photo above. Graham donations were merely payoffs and kickbacks. He knew he would never even get on the radar. Obama is providing Hillary with NSA, DHS, IRS, CIA information for her campaign.
.
My what a corrupt and lawless nations the USA really is.

Bush is a loser for the Republican Party! I hate the Clinton but will not vote for Busg even to destroy Hillary. The Republican appear to be as Silver Spoon as the Democrats say!