CITY OF COLUMBIA, S.C. CRACKS DOWN …

|| By FITSNEWS || The City of Columbia, S.C. has imposed a ban on firearms and other “dangerous weapons” around the S.C. State House in anticipation of the Confederate flag being removed from the north lawn of the capital building this week.

The ban takes effect immediately and runs for thirty days.

Wait … can they do that?

Columbia’s city council evidently thinks so … as its ordinance would ban citizens from carrying firearms or other weapons within 250 feet of the capital grounds for the next month.

According to the ordinance, the flag controversy “has added expediency to the need to take precautionary measures to protect life and property surrounding the Capitol Grounds.”

What about the Second Amendment?

Oh … and then there’s S.C. Code of Laws (§ 23-31-510), which explicitly bans “any county, municipality, or other political subdivision in the State” from imposing or attempting to impose regulations governing “the transfer, ownership, possession, carrying, or transportation of firearms, ammunition, components of firearms, or any combination of these things.”

Reads pretty straightforward to us.

Anyway, here’s a map of the “weapon-free” zone … 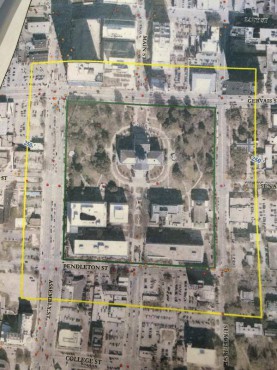 What does the city define as a “dangerous weapon?”  The ordinance doesn’t specify … but it does specify punishments for those who violate this vague, constitutionally dubious mandate.  According to the city, violators will be charged with a misdemeanor and fined up to $500 or sent to jail for up to thirty days.

(Editor’s note: sarcasm ahead) Obviously this ban will be tremendously successful because gang members and angry rednecks are thinking rationally right now and are naturally inclined to obey gun laws in the first place.

After hours of contentious debate, the S.C. House voted 94-20 to remove the Confederate flag from the State House’s north lawn “free and clear” – which is exactly what the S.C. Senate voted to do earlier in the week by a 37-3 margin.  S.C. governor Nikki Haley – a former flag supporter – signed the bill Thursday.

The House vote came three weeks after the horrific, racially motivated “Holy City Massacre” – the mass murder of nine black churchgoers at the Mother Emanuel AME Church in downtown Charleston, S.C.  The Mother Emanuel victims – among them S.C. Senator Clementa Pinckney, the church’s pastor – were gunned down during a Bible study by Dylann Storm Roof, a 21-year-old white supremacist who used the Confederate flag as his calling card.

We supported removing the flag (for more on “why” click here and here).  In fact lawmakers pretty much followed our advice in taking the banner down sooner rather than later.

Which is good … because South Carolina’s “leaders” need to get busy addressing the myriad of issues making ours one of the poorest, least intelligent, most underemployed, most dangerous states in America.

We do not, however, support this “emergency” weapons ban.