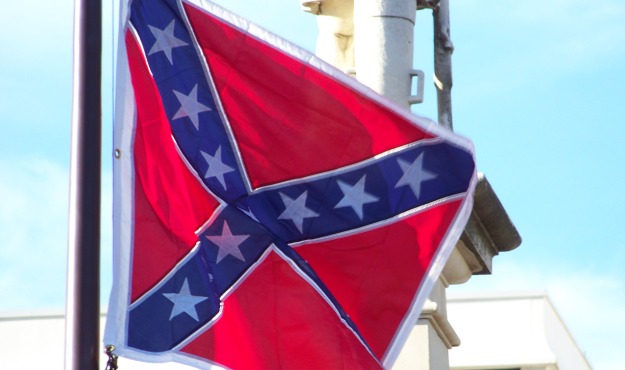 “THERE’S NOTHING ABOUT THIS SYMBOL WORTH FIGHTING FOR …”

|| By FITSNEWS ||  It’s been barely twenty-four hours since a troubled 21-year-old white kid with Confederate flag license plates murdered nine black parishioners – including S.C. Senator Clementa Pinckney – at the historic Mother Emanuel AME church in downtown Charleston, S.C.  In other words everything you’ve read about this tragedy – beyond the original news coverage of the incident and the identification and capture of its alleged perpetrator – is knee-jerk commentary.

Of course that’s wishful thinking – as we’ve seen already.  Before the blood on the floor at Mother Emanuel had even dried, U.S. president Barack Obama and Hillary Clinton, the odds-on favorite to succeed him in the Oval Office, were nakedly politicizing the tragedy in an effort to build momentum for another anti-Second Amendment crusade.

Left and right, all sorts of agendas are being advanced – and will be advanced – in the aftermath of this shooting.  Facts will be twisted, generalizations will be made, motives will be presumed (and impugned) and our polarized culture will pull at the threads from both ends in an effort to unravel anything resembling resolution.

None of the dissonance will bring back the dead – nor will it soothe those who mourn them.  Nor is the cacophonous clamor of talking heads and click-bait web commentary likely to produce the sort of better-worldly wisdom mentioned above.

But through the thick fog created by the “Holy City Massacre” we believe there is truth to be found – and when we think we’ve stumbled upon it, we will say so.

For example, we believe the premeditated carnage – whatever delusional rationalization precipitated it – affirms our support for the expansion of capital punishment (an issue which, ironically, was being debated on this site earlier this week).  We also believe – contrary to Obama and Clinton – it affirms our support for the Second Amendment.  Furthermore, we believe it should spark a serious discussion about mental illness – one this website has been inexcusably slack in advancing.  And yes, it should probably challenge (to some extent) this website’s oft-stated support for the immediate decriminalization of all drugs.

But this post isn’t about the death penalty, gun rights, mental health or drug abuse … or even the despicable racism that appears to have contributed mightily to this tragedy.  It’s about a symbol that, rightly or wrongly, has come to be viewed as racist.

To be clear: This website has never supported – or opposed – the flag.  Because we’ve never really cared about it (even when it was the focal point of the state’s political debate).

“We believe symbols like the Confederate flag – or any other flag – don’t matter because they can easily be used by anybody to advance anything … just like political labels,” we wrote not long ago.

We still believe that to be the case.  Which is why – up until now – we’ve never called for it to be taken down.

Exactly.  Which is why we’ve reiterated this view every time the issue has reared its largely irrelevant head.

But if the question is one of our indifference versus the legitimate angst of others – then this issue should be a no-brainer.  Irrespective of who’s right or wrong from a historical standpoint, why keep something that’s needlessly offending people?  Whether the flag stands for “heritage” or “hate” – or neither or both – it is being perceived as hateful.  And in this case, there is no compelling rationalization to counter this perception.

In other words, there’s nothing about the flag worth fighting for.

If we truly believe it to be a non-issue, then we should have no issue with it coming down.  And we don’t.

What will our readers say this time?  Who knows … but in our view, it’s time for the flag to go.

Oh, and for the record we don’t believe it should be placed in a government museum – because we don’t believe museums are core functions of government.  Lawmakers should simply pass a measure removing the banner from its current location on the State House grounds and be done with it.