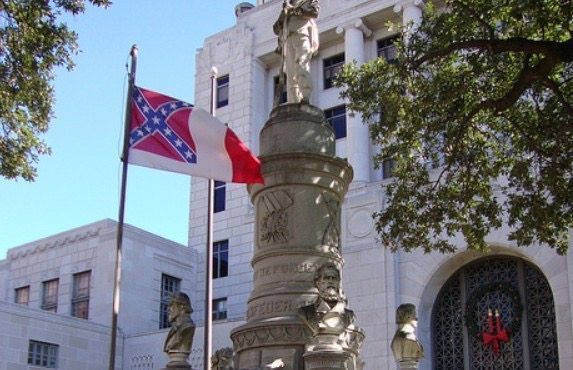 BECAUSE THERE ARE QUITE A FEW OF THEM …

|| By FITSNEWS || South Carolina has faced two major controversies over the Confederate flag in the last fifteen years.

The first ended in 2000 with a fragile compromise, while the second – inspired by a horrific, racially motivated church shooting in Charleston, S.C. – is currently awaiting resolution.

Oddly, in both cases the debate revolves around banners which can lay no claim to being “the Confederate flag” – even though both of the flags in question were used in various capacities by military assets of the Confederate States of America.

More on that in a bit.  First, here are the six official “Confederate flags …”

1. The first formal “Confederate flag” was flown from March 4, 1861 – May 21, 1861 over the dome of the Confederacy’s first capital in Montgomery, Alabama. Designed by German/Prussian artist Nicola Marschall, this flag – known as the “Stars and Bars” – was modeled after the flag of the Austrian empire, with the seven stars representing the first seven states to join the Confederacy (South Carolina, Mississippi, Florida, Alabama, Georgia, Louisiana, and Texas). 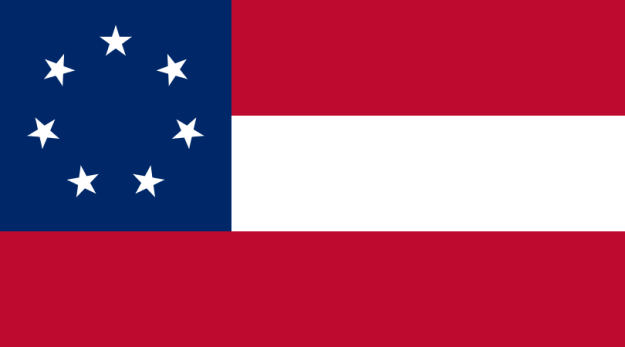 2. The second national flag of the Confederacy (below) flew from May 21, 1861 – July 2, 1861.  It’s the same design as the first, with stars added for Virginia and Arkansas.  It flew over Confederate capitals in Montgomery, Alabama and Richmond, Virginia … 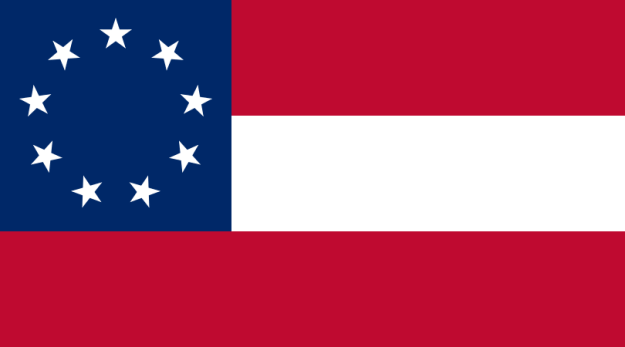 3. The third version of the “Stars and Bars” (below) flew over the Richmond capital from July 2, 1861 – November 28, 1861. It featured eleven stars (reflecting the addition of Tennessee and North Carolina to the Confederacy). 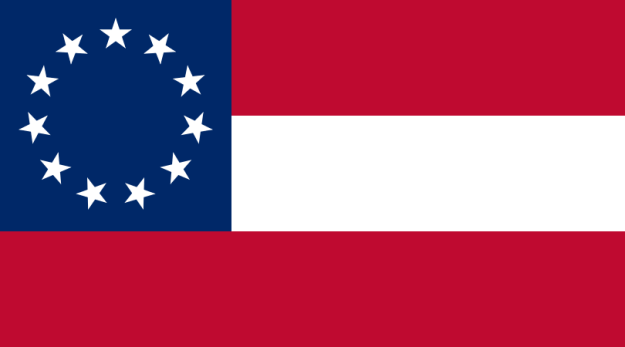 4. The fourth and final version of this flag (below) flew over the Richmond capital from November 28, 1861 – May 1, 1863. It contained thirteen stars (reflecting the Confederacy’s claims over Kentucky and Missouri). 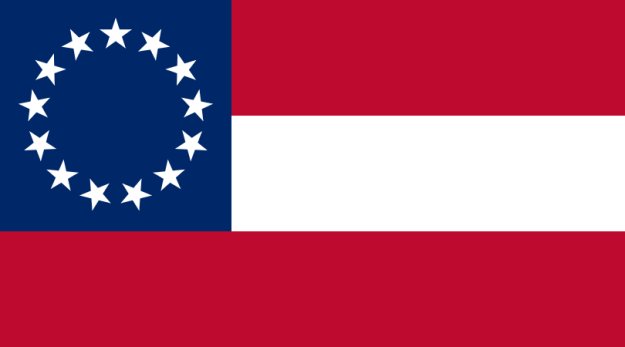 5. The first Confederate flag to bear any resemblance to the banners being debated today was the so-called “Stainless Banner” (below), which flew over the Richmond capital from May 1, 1863 – March 4, 1865.  This flag was approved because many Confederate loyalists believed the “Stars and Bars” too closely resembled the “Stars and Stripes” flown by the federal government.

This flag was designed by Savannah, Georgia newspaper editor William T. Thompson – who called it the “White Man’s flag” named for the large white field accompanying the corner

“As a national emblem, it is significant of our higher cause, the cause of a superior race, and a higher civilization contending against ignorance, infidelity, and barbarism,” Thompson wrote of his banner, adding that “another merit in the new flag is that it bears no resemblance to the now infamous banner of the Yankee vandals.”

6.  The sixth and final Confederate flag (below) – known as the “Blood-stained Banner” – flew from March 4, 1865 until the fall of Richmond in early April 1865.  It was designed by Confederate major Arthur L. Rogers, who was concerned that the “Stainless Banner” could be interpreted by the Confederacy’s enemies as a sign of surrender.  Barely a month after it was approved by the Confederate Congress, though, Richmond fell.  And days later, Confederate general Robert E. Lee‘s Army of Northern Virginia surrendered to Ulysses S. Grant’s Army of the Potomac – effectively ending the War Between the States. 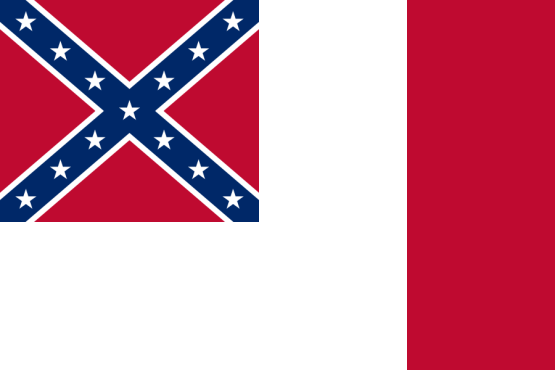 OTHER FLAGS OF SECESSION

Now that you know your official Confederate flags, which rebel banners have flown in South Carolina?  Well, there have been quite a few of them actually.

First there was the Bonnie Blue flag (below) – which was flown by Confederate forces during the Battle of Fort Sumter in April, 1861. 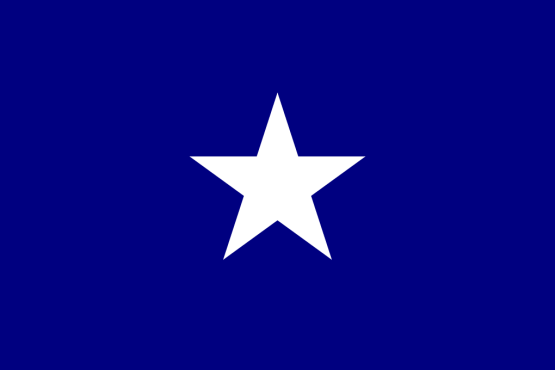 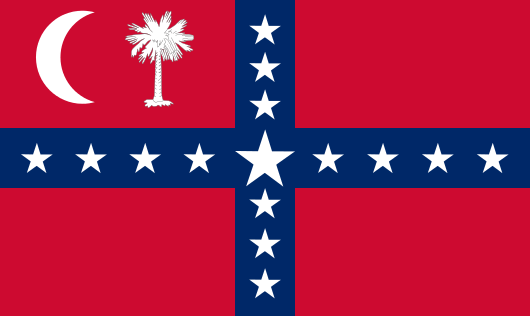 … a secession flag (below, from the Charleston Custom House) …

… a variant of the current state flag (below) … 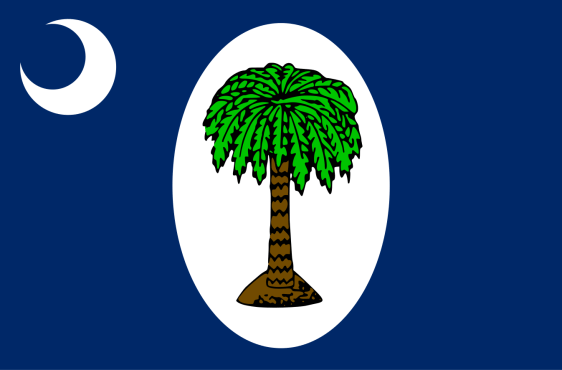 … and eventually the current state flag (below, which was briefly the national flag of South Carolina prior to its decision to join the Confederacy). 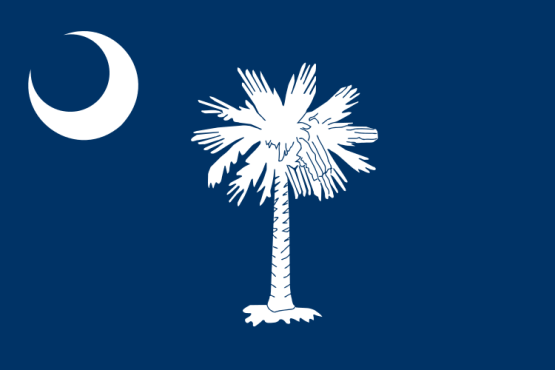 Good … because we haven’t even gotten to the banners at the heart of the 2000 and 2015 controversies.

In 1861, a Walterboro, S.C. native and ardent secessionist named William Porcher Miles designed a flag which he hoped would be adopted by the Confederacy.  It wasn’t.  It did, however, become a Confederate battle flag.  This banner – often mistakenly referred to as the “Stars and Bars” – is officially referred to as the “Battle Flag of the Army of Northern Virginia,” and it is the flag at the heart of the 2015 controversy. 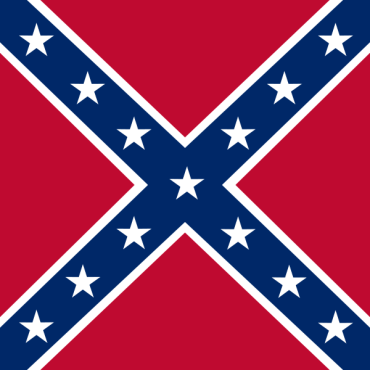 The flag at the heart of the 2000 controversy was the second of two Confederate States Navy (CSN) flags, or “jacks” – a.k.a. maritime flags flown by warships at the head of the vessel during ceremonial appearances or port calls.  It’s worth noting “jacks” are not the official naval battle ensigns, as those flags closely mirrored the designs of the national flags. 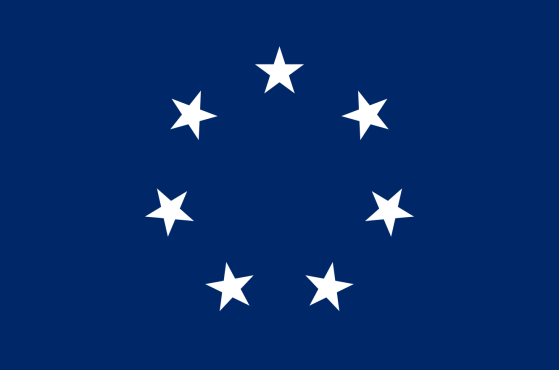 The second “Naval Jack,” which was in service from 1863-1865, was the flag flown from the dome of the S.C. State House (and inside the chambers of the S.C. House of Representatives and State Senate) from 1961-2000.  It was raised in protest of the Civil Rights movement and was taken down on July 1, 2000 in the aftermath of national pressure generated during the 2000 “First in the South” presidential primary election.

Here’s that familiar flag, which is the banner most commonly referred to as “the Confederate flag,” and which is also commonly mistaken for the “Stars and Bars.”

It’s also the flag which appeared on the roof of the “General Lee,” an orange 1969 Dodge Charger which was featured prominently in the hit CBS show The Dukes of Hazzard – which aired from 1979-1985. 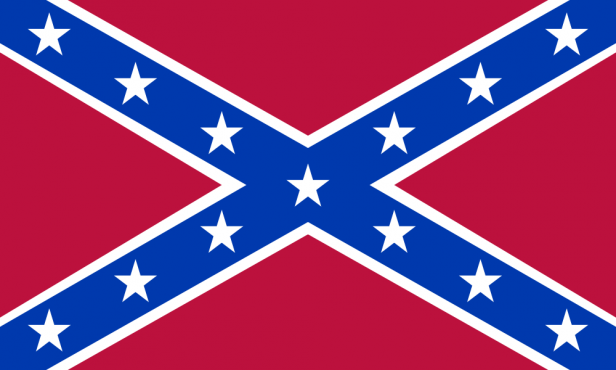 Worth noting, this second Naval Jack is virtually identical to the Confederate battle flag adopted by the Army of Tennessee – which surrendered to the U.S. Army commanded by William T. Sherman’s on April 17-18 near Durham Station, North Carolina (one week after Lee surrendered to Grant). 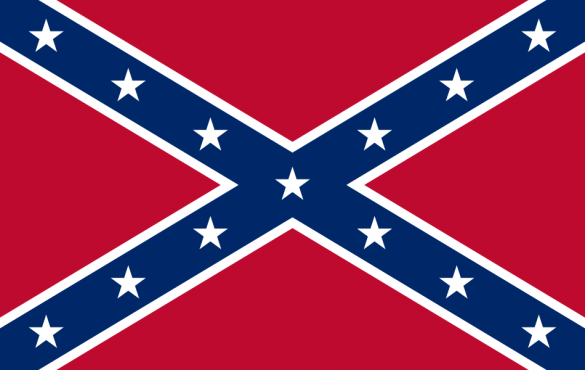 Each and every one of these banners is part of South Carolina’s history – and part of the history of the United States.  And there are individuals with nary a racist bone in their bodies who revere these flags – and who display them with no intention other than honoring the memory of ancestors who fought under their colors.  Also many (if not most) of these memorialized ancestors weren’t slaveowners – but rather poor people fighting against what they believed to be an unjust intrusion on their sovereignty.

But there is no denying the root cause of the War Between the States was the South’s desire to continue the mass enslavement of black Americans.

There is also no denying the Confederate flag was hoisted by white Democrats in South Carolina a hundred years after the end of the Civil War in direct contravention of efforts to extend civil liberties to black Americans.

Furthermore, there can be no denying that the flag has been co-opted by present-day radicals like 21-year-old Dylann Storm Roof – hate-filled individuals who are intent on using deadly violence (committed under the auspices of the flag) to divide Americans against each other along racial lines.

For these reasons, we’ve called for version of the Confederate flag currently flying on the grounds of the S.C. State House to come down.

“Whatever people think the Confederate flag stands for, perception is reality – and the reality is it’s being used as the calling card for a dangerous, deadly new strain of racism, one intent on depriving black Americans of the most fundamental liberty of all: The right to a beating heart,” we wrote a few days ago.

And this site places individual liberty above all else … no matter the color, creed, gender or sexual orientation of the individual.