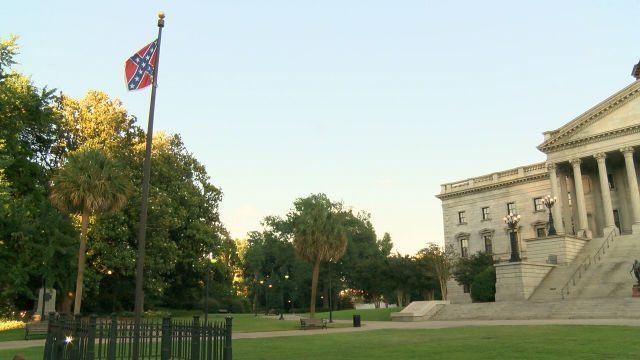 BANNER COULD BE REMOVED ON JULY 1 … OR SOONER

|| By FITSNEWS || S.C. Reps. Doug Brannon and Todd Rutherford have announced their intention to file legislation removing the Confederate flag from the grounds of the South Carolina State House in Columbia, S.C. in the aftermath of last week’s “Holy City Massacre” in Charleston, S.C.

The only problem?  The 2015 legislative session is technically over – meaning the soonest Brannon and Rutherford could file their legislation would be December (during a pre-filing period).  And the soonest their bill could be acted upon in such a scenario would be January 2016.

Or so we’ve been led to believe …

The truth is state lawmakers could take the banner down as part of the state budget that begins on July 1 … and possibly sooner than that if they chose.

By approving what’s known as a “part 2 proviso” to the state’s annual spending plan – which is currently being negotiated by S.C. House and State Senate leaders in a conference committee – the flag could come down within the next ten days.

In fact, assuming two-thirds of both chambers approved the budget containing this proviso, the flag would come down on July 1.

In 2000, when the Confederate flag was moved from the State House dome (and from inside both legislative chambers) to its current location, the compromise mandated that only a two-thirds vote could remove it from that location.

David Drucker of The Washington Examiner got the scoop on this first from a S.C. State House source …

“The Senate, by tradition, has not used part 2 provisos because this power has been abused in the past,” the source told Drucker. “But the Senate, led by the most powerful legislator in the state, Sen. Hugh Leatherman, has a chance to take the flag down this year by demanding it be part of the budget.”

His source is correct …

If the proviso route failed, a two-thirds majority of each chamber could conceivably vote to amend the sine die resolution which governs what legislators can (and cannot) address during the temporary adjournment of the S.C. General Assembly – thus permitting them to take down the flag as a stand-alone piece of legislation (which would again require two-thirds majorities of both chambers).

Should they undertake an effort to obtain such votes?

This website has never been antagonistic toward the flag.  Hell, we’ve never really had much in the way of an opinion about it.

Whatever people think the Confederate flag stands for, perception is reality – and the reality is it’s being used as the calling card for a dangerous, deadly new strain of racism, one intent on depriving black Americans of the most fundamental liberty of all: The right to a beating heart.

Hoisted by the state in 1962 as a rebuke of the civil rights movement, there is simply no compelling reason to leave this banner in place – and its removal imposes no hardship upon anyone’s freedom.

Lawmakers should take it down.  Now.

Seriously … as often as this website battled over the years with S.C. Senator Clementa Pinckney (one of the victims of the Mother Emanuel AME Church attack) does anyone really think the building in which his body will lay in state should be adorned by the same flag his murderer waved?

Finally, if South Carolina’s leaders think this issue is going to die down between now and January, we would remind them of the presidential primary circus coming to town that month … and the national media accompanying that circus … which is pretty much why the flag was moved off the dome in 2000.