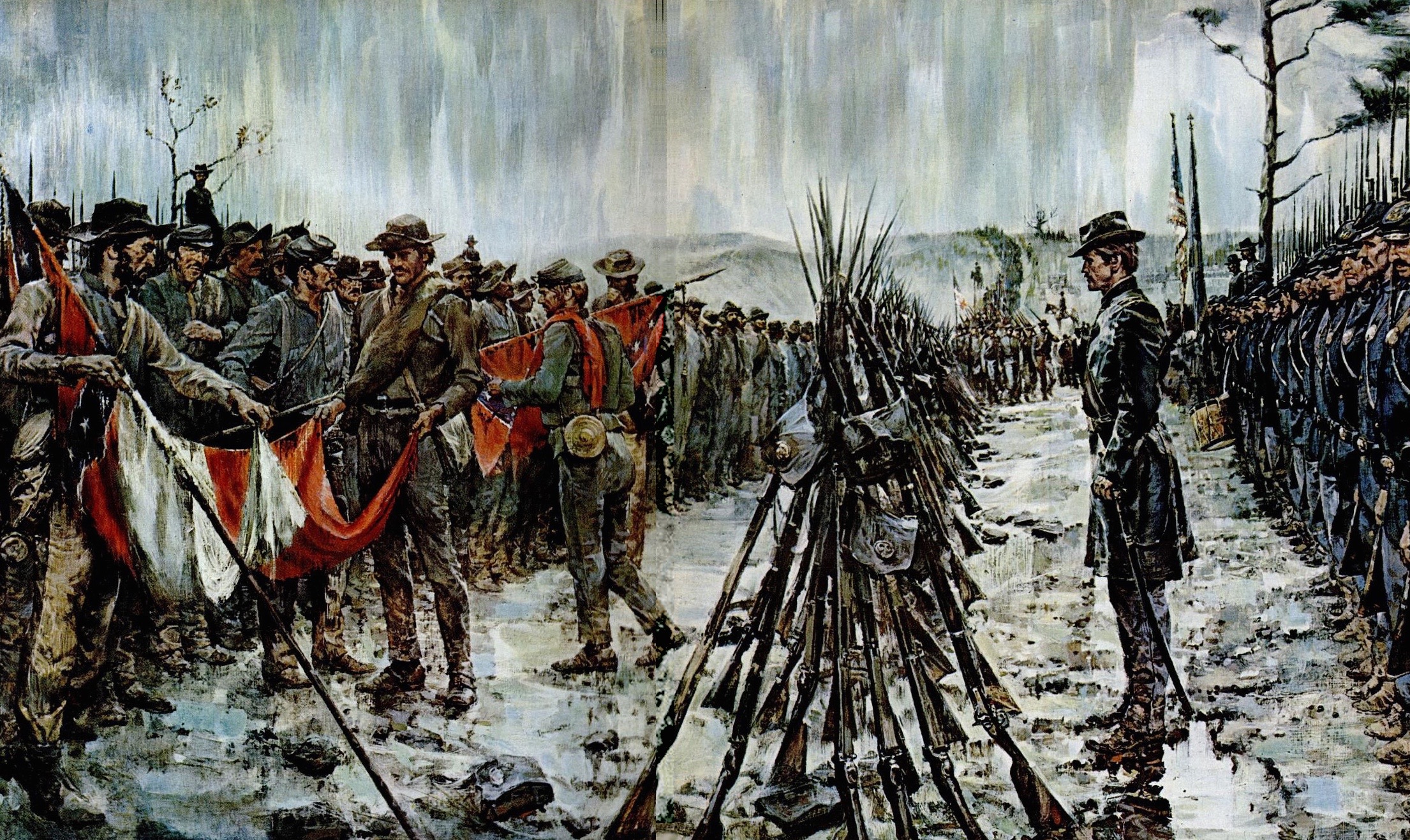 || By WILL FOLKS || My website has written extensively on the various banners used by – or associated with – the former Confederate States of America.  For a brief history of those flags (along with a reiteration of this website’s views on the current debate swirling around Confederate flag), click here.

Here’s a question often overlooked in the contemporary cacophony, though: Why in the hell was the Confederate flag flying on government grounds in the first place?

Seriously: Who put the flag on the dome of the S.C. State House to begin with?  After all, didn’t the Confederate generals who are so revered by the “heritage, not hate” crowd (a.k.a. supporters of the flag) lay these banners down?

In the May 1901 editions of The Boston Journal, Joshua Lawrence Chamberlain – a hero of the Battle of Gettysburg – wrote extensively of the surrender of the Army of Northern Virginia on April 12, 1865.  Chamberlain was tasked by his superiors with overseeing the surrender of the weapons and flags belonging to Confederate general Robert E. Lee‘s troops – which he did.

The most gracious of victors, Chamberlain even evoked the scorn of many northerners when he offered a salute to his vanquished foe.

Confederate general John B. Gordon – assigned to organize the surrender – years later referred to Chamberlain as “one of the knightliest soldiers of the Federal Army.”

“Having thus formed, the brigades standing at ‘order arms,’ the head of the Confederate column, General Gordon in command, and the old ‘Stonewall’ Jackson Brigade leading, started down into the valley which lay between us, and approached our lines. With my staff I was on the extreme right of the line, mounted on horseback, and in a position nearest the Rebel solders who were approaching our right.

“Ah, but it was a most impressive sight, a most striking picture, to see that whole army in motion to lay down the symbols of war and strife, that army which had fought for four terrible years after a fashion but infrequently known in war.

“At such a time and under such conditions I thought it eminently fitting to show some token of our feeling, and I therefore instructed my subordinate officers to come to the position of ‘salute’ in the manual of arms as each body of the Confederates passed before us.

“It was not a ‘present arms,’ however, not a ‘present,’ which then as now was the highest possible honor to be paid even to a president. It was the ‘carry arms,’ as it was then known, with musket held by the right hand and perpendicular to the shoulder. I may best describe it as a marching salute in review.

“When General Gordon came opposite me I had the bugle blown and the entire line came to ‘attention,’ preparatory to executing this movement of the manual successively and by regiments as Gordon’s columns should pass before our front, each in turn.

“The General was riding in advance of his troops, his chin drooped to his breast, downhearted and dejected in appearance almost beyond description. At the sound of that machine like snap of arms, however, General Gordon started, caught in a moment its significance, and instantly assumed the finest attitude of a soldier. He wheeled his horse facing me, touching him gently with the spur, so that the animal slightly reared, and as he wheeled, horse and rider made one motion, the horse’s head swung down with a graceful bow, and General Gordon dropped his swordpoint to his toe in salutation.

“By word of mouth General Gordon sent back orders to the rear that his own troops take the same position of the manual in the march past as did our line. That was done, and a truly imposing sight was the mutual salutation and farewell.

“At a distance of possibly twelve feet from our line, the Confederates halted and turned face towards us. Their lines were formed with the greatest care, with every officer in his appointed position, and thereupon began the formality of surrender.

“Bayonets were affixed to muskets, arms stacked, and cartridge boxes unslung and hung upon the stacks. Then, slowly and with a reluctance that was appealingly pathetic, the torn and tattered battleflags were either leaned against the stacks or laid upon the ground. The emotion of the conquered soldiery was really sad to witness. Some of the men who had carried and followed those ragged standards through the four long years of strife, rushed, regardless of all discipline, from the ranks, bent about their old flags, and pressed them to their lips with burning tears.

“And it can well be imagined, too, that there was no lack of emotion on our side, but the Union men were held steady in their lines, without the least show of demonstration by word or by motion. There was, though, a twitching of the muscles of their faces, and, be it said, their battle-bronzed cheeks were not altogether dry. Our men felt the import of the occasion, and realized fully how they would have been affected if defeat and surrender had been their lot after such a fearful struggle.

“Nearly an entire day was necessary for that vast parade to pass. About 27,000 stands of arms were laid down, with something like a hundred battleflags; cartridges were destroyed, and the arms loaded on cars and sent off to Wilmington.

“Every token of armed hostility was laid aside by the defeated men. No officer surrendered his side arms or horse, if private property, only Confederate property being required, according to the terms of surrender, dated April 9, 1865, and stating that all arms, artillery, and public property were to be packed and stacked and turned over to the officer duly appointed to receive them.

That, friends, is “heritage.”  Mutual honor.  Shared respect.  Joint admiration.  Raw emotion.  Exhaustion.  Sadness.  Pain.  But at the end of it all … a laying down of the banners.  A surrender.

“Heritage” is what Chamberlain described above.  A solemn ceremony reverently concluding one of the bloodiest periods in human history.

Heritage is not – a hundred years after the fact – raising one of these fallen standards in a desperate bid to reassert some perceived dominance of one race over another.

South Carolina’s decision to raise the Confederate flag in 1962 was a calculated rebuke of efforts to expand individual liberty to black Americans – and it was wholly inconsistent with the noble laying down of arms at Appomattox.

As a boy, my father took me to many Civil War battlefields.  I saw Little Round Top, where Chamberlain’s 20th Maine Volunteer Infantry Regiment held off – and then fixed bayonets – against exhausted Alabama and Texas troops under the command of brigadier general Evander Law.  We also walked the ground where Confederate general George Pickett‘s men marched toward certain death in the charge that bears his name – a.k.a. the high-water mark of the Confederacy (and the blow from which its armies never recovered). 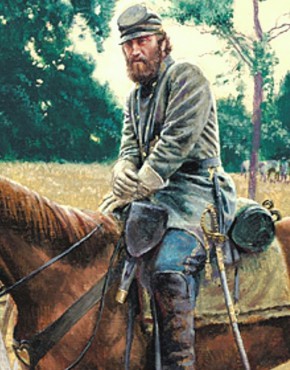 I saw Chancellorsville, site of the brilliant and daring flanking march undertaken by troops under the command of Confederate general Stonewall Jackson (who died days later of wounds sustained by friendly fire in that engagement).

“Let us cross over the river and rest under the shade of the trees,” Jackson cryptically said prior to passing away.

And yes, I’ve been to the house – the very room – near Guinea Station, Virginia where he died.

I saw the bridge at Antietam Creek, site of the bloodiest day in American military history – on which 3,654 Americans gave what Abraham Lincoln would later famously describe as “their last full measure of devotion.”

I saw the ground at Spotsylvania Court House where Union general John Sedgwick fell dead from a sniper’s bullet seconds after telling his troops, “boys, they couldn’t hit an elephant from this distance.”

I saw the hornet’s nest at Shiloh, the bloody pond at Chickamauga, the stone wall at Fredericksburg … and dozens of other sites which to this day bear mute testimony to the heroism and sacrifice displayed by soldiers on both sides of the conflict.

And I saw Appomattox – the very ground upon which the defeated Confederate surrendered their standards (as described above by Chamberlain).

Again, all of this is “heritage.”  And it is America’s shared heritage, meaning it is not something which should be erased … or glossed over.  Or misrepresented (at taxpayer expense, no less).

The flag honorably laid down at Appomattox should have never been raised again, and the fact it was – in defiance of individual liberty, no less – is not “heritage.”  It is a stain on heritage.  And the fact nine Americans have now been brutally cut down by a killer claiming this banner as his symbol is – and should be – the last straw.

Whatever the Confederate flag once stood for … its ill-conceived, ill-intentioned re-raising half a century ago has permitted its legacy to be hijacked by dishonorable, divisive cowards.  Deadly ones at that.

Whatever it once was … through the actions of these individuals, it has become “hate, not heritage.”

Which is why it must come down.

Why South Carolina Flipped On The Confederate Flag