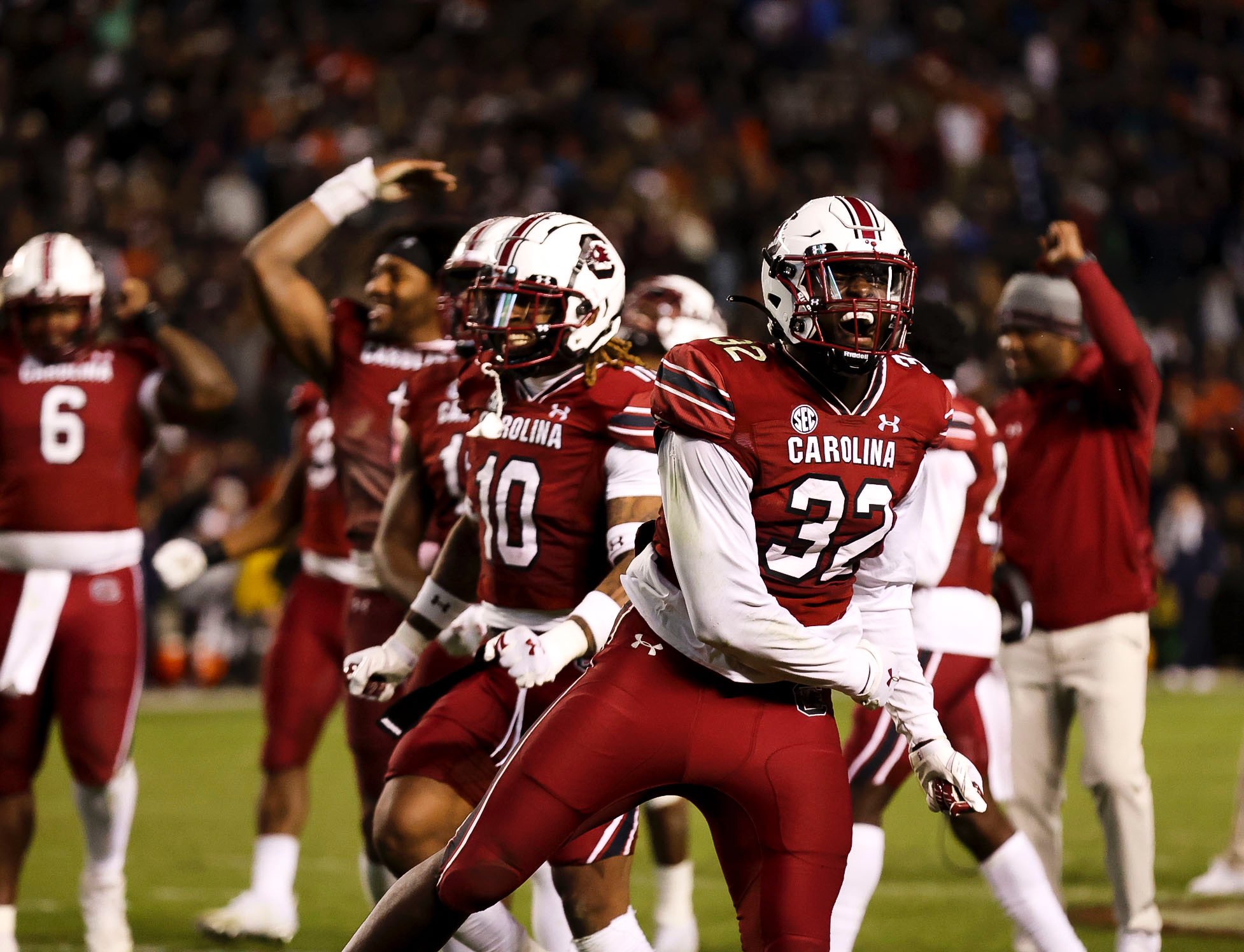 The 2021 University of South Carolina football season was supposed to be an unmitigaged disaster. And for awhile, it was. For awhile, it was actually worse than expected.

As recently as a month ago, first-year head coach Shane Beamer as on the receiving end of ominously worded programmatic assessments like this. And let’s be honest: The critical tomes penned in the aftermath of the team’s historically lopsided loss to Texas A&M were well-deserved.

As recently as a month ago, South Carolina was regressing as a team … and as a program. Which – when you think about what they were regressing from – was utterly inexcusable.

Seriously, fans were openly discussing how much better off things were under former head coach Will Muschamp – which tells you all you need to know about the gravitational direction of the program in late October.

What a difference a month makes, though …

Beamer is the toast of the town heading into rivalry week after his Gamecocks upset Auburn at Williams-Brice stadium on Saturday evening – a victory which made South Carolina bowl eligible for the first time in three years.

How do we know it was a huge win? Because the Gamecock’s “bitter beer face guy” was feeling it, that’s why …

Before those riding the wave get too carried away, though … gravity is always eager to help those who stumble. Especially those who stumble on pride. And especially Gamecock fans. Those looking to poke holes in Beamer’s late-season surge have an ample sufficiency of “well, but …” in their arsenal.

Florida, for example, clearly wasn’t the No. 11 team in the nation this year – which is where it was ranked heading into the season. Oh, and half of its roster was coming off of the flu when the unranked Gators rolled into Columbia on November 6.

Auburn obviously wasn’t as good as advertised, either. More of a “War Darn Eagle” squad this year (although sophomore tailback Tank Bigsby had a huge game for first-year coach Bryan Harsin). The big problem for the Tigers was the loss of dual-threat quarterback Bo Nix to season-ending ankle surgery last week – breaking his streak of 34 consecutive starts.

With just over two minutes remaining in the game and South Carolina clinging to a 21-17 lead, the Gamecocks punted to Auburn after failing to convert a third down from their own 43-yard-line. A high kick from Kai Kroeger bounced near (brushed?) sophomore cornerback Jaylin Simpson’s right thigh and was downed (recovered?) by the home team.

The ruling on the field – which ostensibly required indisputable evidence to overturn – was that the ball did not come into contact with Simpson’s leg prior to being collected by the Gamecock punt team. Meaning it was Auburn’s football.

Was there “indisputable” video evidence to the contrary?

Auburn homers were livid at the call … and not without reason.

“The (officials) simply decided to gift the ball to the Gamecocks in the final two minutes despite the original ruling on the field being a recovery by the punt receiving team with no decisive evidence that it had brushed Simpson’s knee,” Andrew Hughes of Fly War Eagle noted.

“Get your **** together, SEC officiating,” Hughes added.

As a lifelong Gamecock fan, the video evidence implicating Simpson was hardly incontrovertible – meaning the call on the field should have been upheld. What did replay officials see differently? I don’t know, but it was almost as if SEC commissioner Greg Sankey was in the ear of the booth – and referee Ken Williamson – reminding them the conference still needed to place a team in the Union Home Mortgage Gasparilla Bowl.

To be clear: The officials’ decision did not decide the game. Even had the ruling on the field been upheld, Auburn still had less than a one-in-ten chance to prevail according to ESPN’s probability index (which I assume is compiled by people who are more intelligent than ESPN marketers).

Writing as charitably as possible, though, this particular “fumble” recovery will probably not go down as a highlight reel example of “Beamer Ball,” the brand of superlative special teams play Beamer’s father, Hall of Fame coach Frank Beamer, was famous for during his twenty-nine years as head coach at Virginia Tech.

Here’s the key question, though: Can Beamer keep the good times rolling?

He made it clear last week the South Carolina head coaching position remains his “dream job” – even as the Hokies announced they were searching for a new program leader after parting ways with sixth-year head coach Justin Fuente. But to keep that dream job, Beamer must consistently beat expectations. Not just beat them once or twice.

Are the odds in his favor on that front?

I have previously described the 44-year-old’s hiring by embattled South Carolina athletics director Ray Tanner last year as “terrible on paper,” and I stand by the percentages I presented prior to his inaugural campaign in Columbia.

“There is a ten percent chance (he) becomes an elite college football coach – taking the Gamecock program to new heights,” I noted in a post back in May. “But there is also a 40 percent chance he becomes a middle-of-the-road hire who enjoys only marginal success and a 50 percent chance he winds up (becoming) another Muschamp – or worse.”

I have also reminded readers “I hope I am wrong,” if for no other reason than Beamer seems like a genuinely good guy. Oh, and South Carolina is my alma mater and the team I have cheered for since I was a little boy.

I want the program to succeed, which is why I use my microphone to try and hold it accountable (much to the chagrin of some fans).

With two games left on the 2021 schedule, Beamer has already exceeded expectations for the current campaign – and attaining bowl eligibility means his staff and players will get several additional weeks of practice together. That is huge for team cohesion – and for program development.

As of this writing, Beamer is an even money bet to finish 2021 ahead of where Muschamp was at the end of his first campaign. Possibly well ahead.

But again, the key is going to be consistently beating expectations. It’s one thing to quiet your critics – it’s something else entirely to prove them wrong. Beamer has done the former, but the jury is still out as to whether he will be able to do the latter.

One way to move the needle in a big way? Do something Muschamp could never do and beat Clemson …

Brent Venables To Oklahoma: The Clemson Collapse Is Accelerating

Gamecock Football: Shane Beamer Isn’t Panicking … But Maybe He Should Be