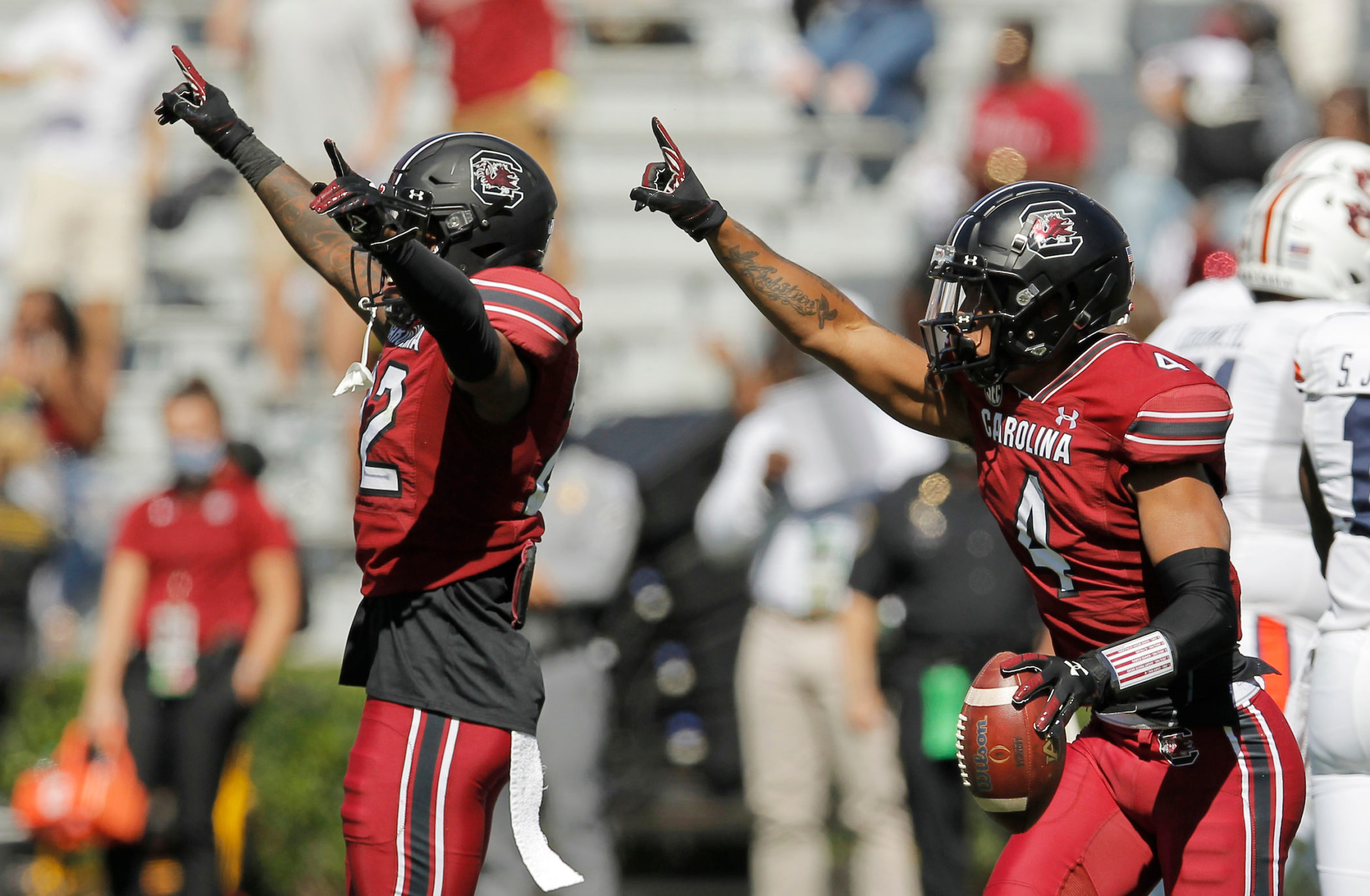 The University of South Carolina football team did something on Saturday that it had done just once previously in head coach Will Muschamp’s four-and-a-half years in Columbia, S.C. – defeat a ranked opponent at home.

This win went down to the wire, too – with South Carolina’s defense stopping Auburn on a fourth-and-five from its own 12-yard line on the final play of the game. Tigers’ quarterback Bo Nix was tackled well short of the goal line – and a penalty flag against Auburn dashed head coach Gus Malzahn’s last hope of tying the game in regulation.

Nix threw three interceptions – all of which South Carolina turned into touchdowns. That doomed the Tigers (2-2) in a game that saw them out-gain the Gamecocks (2-2) by a sizable margin.

Auburn amassed 481 yards against defensive coordinator Travaris Robinson’s unit – nearly 200 more yards than the Gamecocks’ offense was able to put up against the Auburn defense.

Nix didn’t throw any pick-sixes, but his interceptions enabled South Carolina quarterback Collin Hill and the retooled Gamecock offense to work with a short field three times. They found pay dirt each time – first on a five-play, 29-yard drive to start the second quarter, then on an 11-play, 49-yard drive to close out the stanza and finally on a one-play, eight-yard drive that put them up by eight points with less than a minute to go in the third quarter.


You cannot capitalize on an opponent’s miscues any better than that … and capitalizing on miscues is an absolute “must” in games against ranked foes.

Hill, a graduate transfer from Colorado State, completed 15 of 24 passes for 144 yards. He had one touchdown and one interception. His favorite target? Shi Smith. The 5-foot-10, 190-pound senior flanker from Union, S.C. caught eight passes for 76 yards and one touchdown – giving him 347 yards and three touchdowns on the season.

The brash, trash-talking wideout dazzled television audiences (and a coronavirus-capped crowd of 15,766) early in the fourth quarter with a circus-style, one-handed juggling reception as he tumbled out of bounds on the South Carolina sideline.

The 32-yard reception converted a key third down for the Gamecocks – leading to a 39-yard field goal from senior placekicker Parker White six plays later that put South Carolina ahead 30-19 with just over nine minutes left on the clock.

Make no mistake about it: This was a definitional must-win game for Muschamp – a two-time former Auburn defensive coordinator. After flaming out spectacularly at Florida from 2010-2014, the 49-year-old Rome, Georgia native has seen his South Carolina teams regress in each of the last two seasons – turning up the heat under his irascible seat.

Muschamp likely would have lost his job following an embarrassing 4-8 mark last season, but the school couldn’t afford to buy out his contract.

Muschamp also praised Nix – who finished the game completing 24 of 47 passes for 272 yards with one touchdown and the aforementioned three picks. Nix also ran fifteen times for 69 yards.

“He’s got great legs – he’s a great competitor,” Muschamp said of the Auburn signal caller. “He kept fighting and our guys did as well,”

Auburn also received another standout performance from true freshman tailback  Tank Bigsby. The 6-foot-0, 204-pound true freshman from LaGrange, Georgia had 111 yards on 16 caries with one touchdown – averaging an impressive 6.9 yards per carry.

South Carolina’s last win against a ranked opponent was last year’s shocking 20-17 upset of then-No. 3 Georgia between the hedges at Sanford Stadium in Athens. Muschamp is now 3-14 against ranked opponents in his career in Columbia after going 5-14 against them during his tenure in Gainesville.

Oh, the upset was also South Carolina’s second win all-time against Auburn in thirteen tries – with the last Gamecock victory coming all the way back in 1933 in Birmingham, Alabama.

That’s right … the Gamecocks broke a losing streak of 87 years.

In fairness, though, South Carolina and Auburn rarely play each other – meeting only twice in the past decade. And the only reason they played this season was the Southeastern Conference (SEC)’s controversial decision to play a 10-game, conference-only slate in response to the coronavirus pandemic.

South Carolina heads back on the road next weekend – traveling to Baton Rouge, Louisiana for a road test against the defending national champion LSU Tigers. Head coach Ed Orgeron’s team had the weekend off following a 45-41 loss to Missouri on October 10, 2020. The Gamecocks are an anemic 2-18-1 overall against LSU – including a 1-6-1 mark since joining the SEC in 1992.