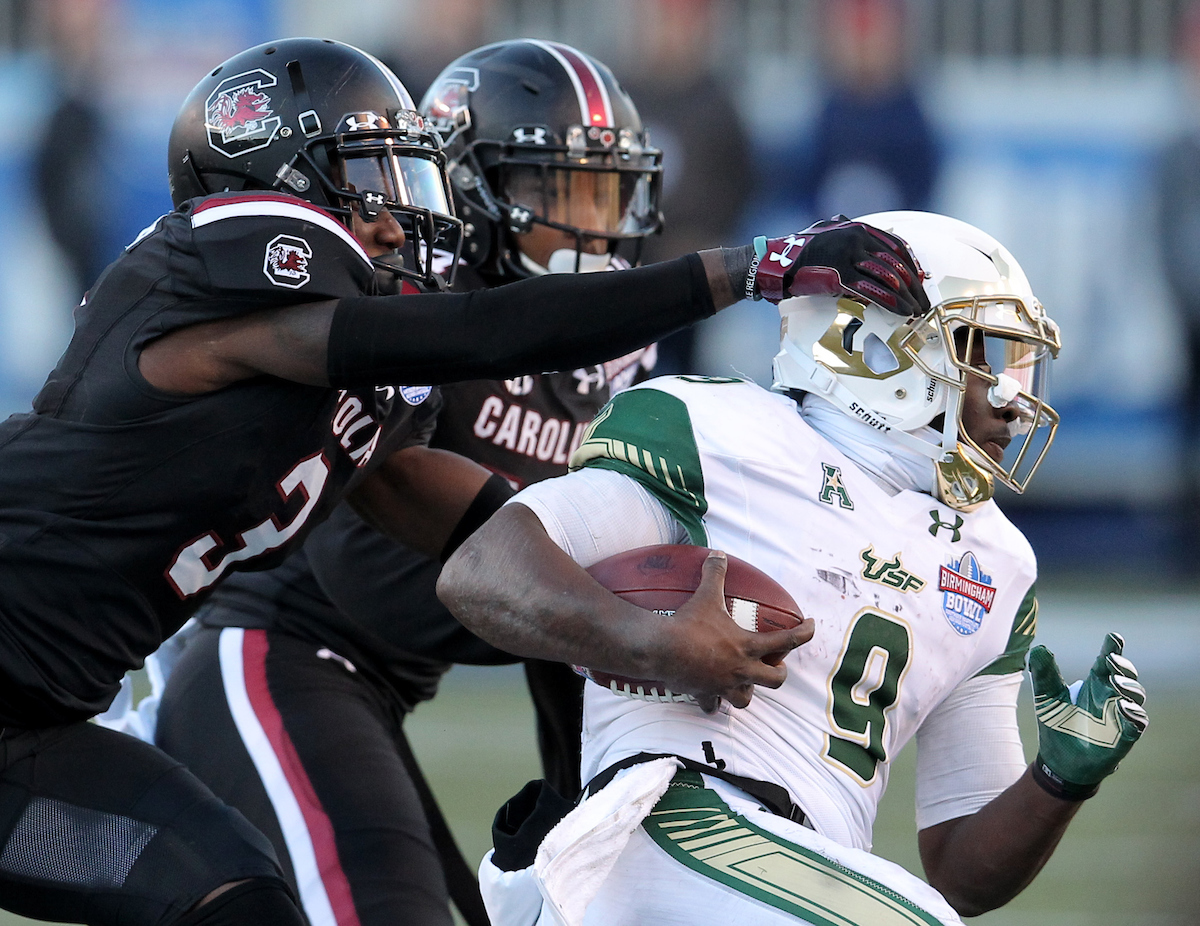 The University of South Carolina ended its first season under new head coach Will Muschamp with a loss – although at least this time they bothered to show up.

For part of the game, anyway …

Unlike the team’s disastrous regular-season finale against arch-rival Clemson, the Gamecocks (6-7, 3-5 SEC) managed to make things interesting on Thursday against the heavily-favored South Florida Bulls (11-2, 7-1 AAC).

Trailing by 18 points late in the third quarter, South Carolina rallied to tie the game at the end of regulation – but couldn’t close the deal in overtime.  After giving up a touchdown on the opening play of the extra frame, South Carolina committed its fifth turnover of the game on the ensuing possession – giving South Florida its first ever eleven-win season.

The Gamecock defense – which gave up 55 points against Clemson its last time out – simply didn’t have an answer for Bulls’ quarterback Quinton Flowers.  The dual-threat signal-caller completed 23 of 32 passes for 261 yards with a pair of touchdowns and one interception.  He added another 105 yards rushing on 21 carries – including a Birmingham Bowl record three rushing touchdowns. 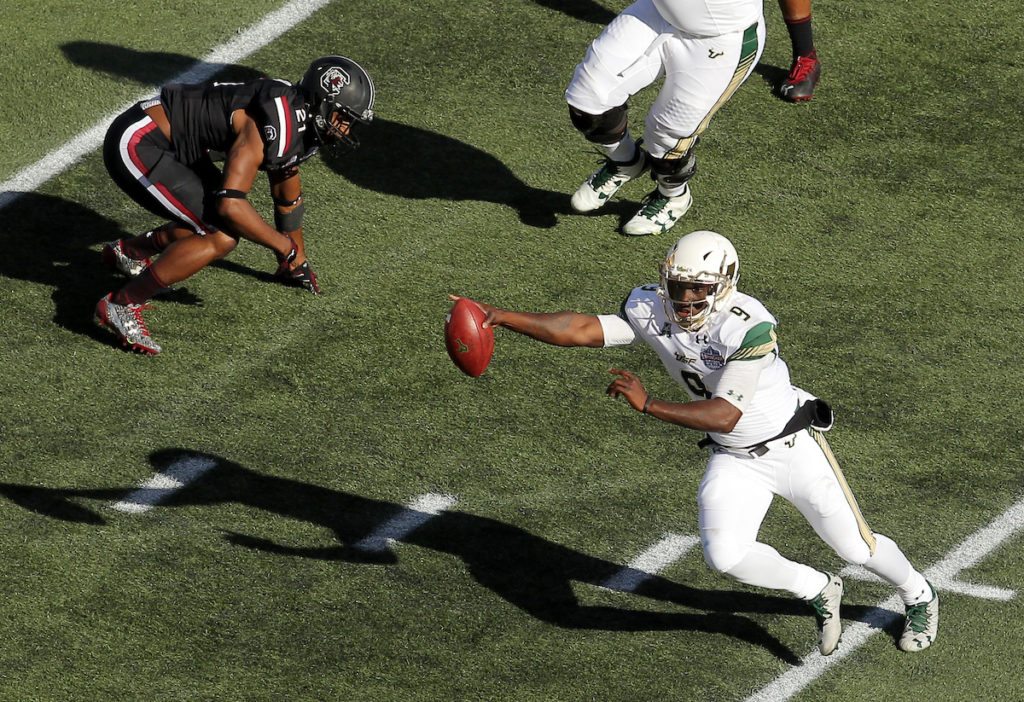 Flowers, who was named the bowl’s MVP, called out Muschamp after the game – saying the former Florida head coach was among those who tried to get him to switch positions coming out of high school.

Muschamp tried to get Flowers to play safety for the Gators – an offer he declined.

Meanwhile South Carolina’s quarterback of the future showed flashes of brilliance – but failed to protect the football at critical moments in the game.

True freshman Jake Bentley – who went 4-3 after inheriting the starting quarterback job in late October – completed 32 of 43 passes for 390 yards and three touchdowns for the Gamecocks (all career highs).  Unfortunately he turned the ball over three times – including a “pick six” late in the third quarter that gave the Bulls a seemingly insurmountable 39-21 lead. 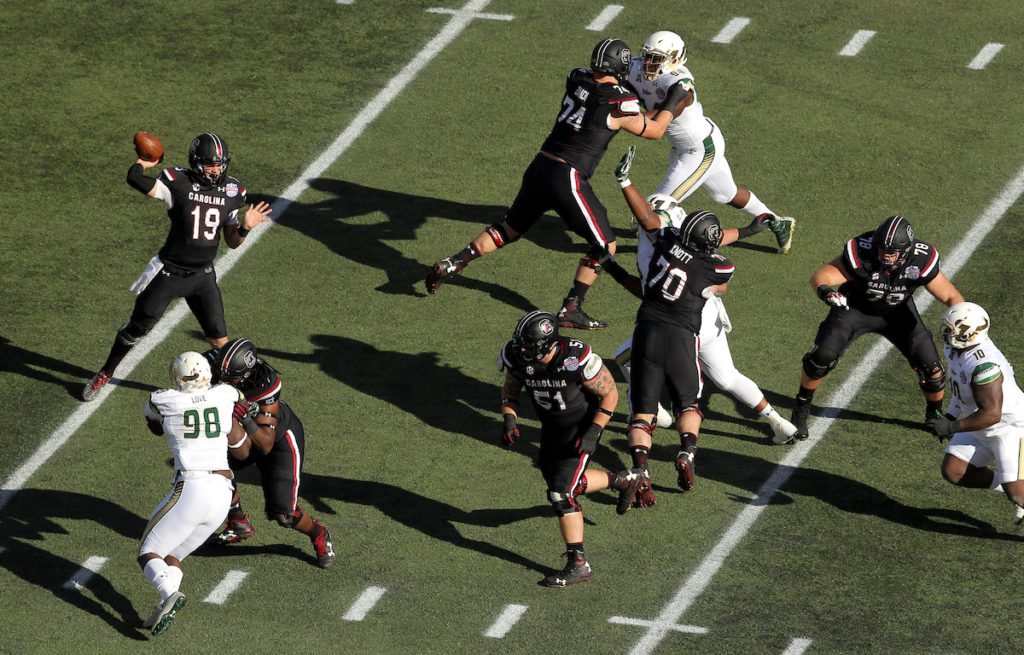 Bentley led a furious comeback, though, including a late touchdown and two-point conversion to tie the game with just over a minute remaining on the clock.

His favorite target?  Sophomore wide receiver Deebo Samuel, who caught 14 passes for 190 yards – both career highs.  The 6-foot-0, 200-pound speedster caught a three-yard touchdown pass and ran for a four-yard score on his only carry of the game.

South Carolina couldn’t get it done in overtime, though, with Bentley fumbling on the final play of the game after being sacked by South Florida’s Mike Love.  Two other fumbles helped doom the Gamecocks – one on the Bulls’ two-yard-line by true freshman Rico Dowdle and another on the South Florida one-yard-line by redshirt freshman A.J. Turner.

Surprisingly, South Carolina actually out-gained the Bulls’ vaunted “Gulf Coast Offense” – racking up 481 total yards to the Bulls’ 465 total yards.  Of course that’s little consolation to Gamecock fans – who have seen their program post a 16-22 record over the past three seasons after going 33-6 from 2011-2013.

Can Muschamp turn things around?  Time well tell … but he will be under intense pressure to do so given the young stars in his stable. 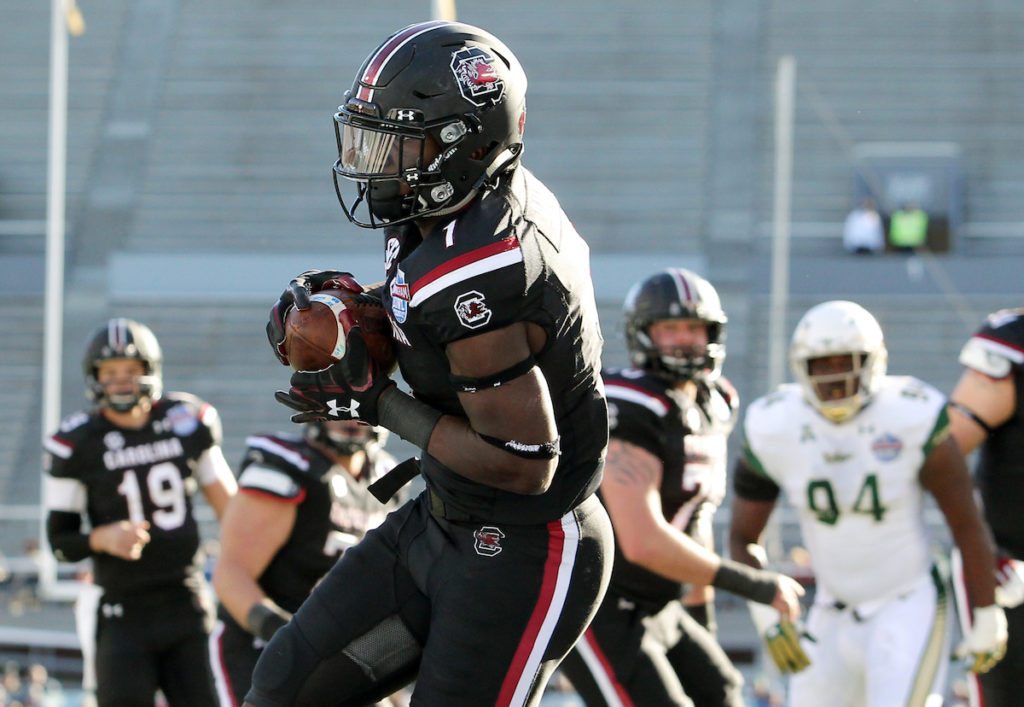 Bentley, Samuel, Dowdle and Turner – along with true freshman wide receiver Bryan Edwards – form a potent nucleus of talent at the offensive skill positions.  However the Gamecocks will need plenty of help along the offensive line if co-coordinators Kurt Roper and Bryan McClendon hope to employ those weapons to maximum effect against Southeastern Conference defenses.

Still, given where the Gamecock offense was at midseason – literally the worst in the nation – there is reason for optimism.

Muschamp and his staff managed to stave off a recruiting disaster after last season’s 3-9 debacle, but they will clearly have to make major strides on the trail in 2017 – which won’t be easy giving the recruiting dominance displayed in recent years by in-state rival Clemson.

For South Florida, the future of the program is very much in flux.  Bulls’ head coach Willie Taggart left the program following the regular season to accept the head coaching position at Oregon – leaving co-offensive coordinator T.J. Weist to lead the team in an interim capacity.  Former Louisville and Texas head coach Charlie Strong will take the reins of the program in 2017.

Dabo Swinney To Texas? Not A Chance …