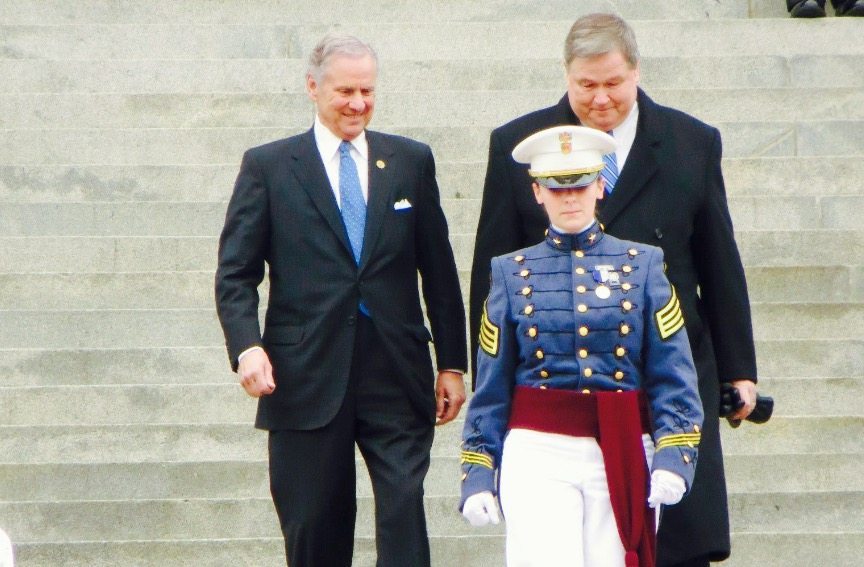 THE “GODFATHER OF PORK” HAS HIS BACK …

As the 2018 South Carolina gubernatorial campaign begins to take shape, we know two things: First, that the field will be crowded.  And second, the vast majority of action will be on the “Republican” side.

After all, GOP candidates enter statewide races in South Carolina with a decided electoral advantage – which is why fiscal liberals have begun to ditch the Democratic primary process and run as “Republicans.”

And not just run, either … win.

Anyway, one of the two announced “Republican” candidates for governor in 2018 is a lifelong Democrat named Yancey McGill.

McGill joined the GOP in March of this year after spending a quarter of a century as a Democratic State Senator (and half a year as the state’s Democratic lieutenant governor).

Labels aside, he’s one of the fiscal liberals who has presided over state government’s unsustainable spending and borrowing – which of course has produced abysmal results economically, educationally and with regards to infrastructure.

Far from disqualifying him in Palmetto politics, though, such slavish devotion to failed fiscally liberal policies is actually a ticket to expanded relevance and influence … especially in McGill’s case.

While it might be tempting to dismiss the aspirations of a thick-drawled, party-switching, 63-year-old glad hander – McGill’s gubernatorial candidacy is for real.  In fact, there’s a case to be made that he – along with current lieutenant governor Henry McMaster – is positioned to become one of the early frontrunners in this looming free-for-all.

How so?  Well, one of the worst-kept secrets at the S.C. State House is that powerful State Senate president (and finance committee chairman) Hugh Leatherman is actively promoting McGill’s gubernatorial candidacy – part of what’s being referred to by insiders as the “Pee Dee Project.”

According to our sources, the “Pee Dee Project” is Leatherman’s bid to consolidate all legislative and executive power in South Carolina in the hands of politicians who hail from the rural Pee Dee area of the state – a.k.a. the Interstate 95 corridor that runs through the northeastern portion of South Carolina.

Currently Leatherman wields tremendous (albeit not total) power in the State Senate, while the S.C. House is led by Speaker Jay Lucas.

Both Leatherman and Lucas represent Florence County – the heart of the Pee Dee.  McGill?  He’s from nearby Kingstree, S.C. – in Williamsburg County.

“The executive branch in South Carolina – it’s not the sort of check you see at the federal level or in other states – but it can complicate things through the veto and various appointments,” one insider told us.  “Imagine if lawmakers had no veto threat to worry about?  Or if every board and commission in the state was exclusively under legislative control?”

Actually, lawmakers haven’t had to worry about the veto threat in recent years – because S.C. governor Nikki Haley hasn’t vetoed anything.  And on the issues that matter, her appointments have been in lockstep with Leatherman.

Sort of like her governing philosophy has morphed into his …

Nonetheless, Haley went up against Leatherman earlier this year in his GOP primary election – and lost big.  Now Leatherman is spoiling for a fight … and looking for a governor who can help him further consolidate his near-dictatorial hold over the Palmetto State.

According to our sources, Leatherman is pressing his donors to support McGill – arranging meetings and encouraging them to endorse his candidacy and lend him their financial support.

Leatherman’s efforts have been effective, too.

Sources tell us the front-running McMaster – who is courting many of Leatherman’s establishment “Republican” donors – has been frustrated to discover that many of these big money backers are already on board with McGill’s candidacy.

“He’s cursing them,” one source told us, adding that they weren’t aware the church-going McMaster “had such a foul mouth.”

From Pawleys Island to Greenville, S.C., McGill has been racking up some impressive early endorsements – much to the chagrin of the rest of the GOP field.  And with Leatherman reportedly ramping up his efforts in recent weeks, we expect McGill to build on his early successes and post a solid early fundraising number.

McGill is also benefitting from the fact that two of his children – lobbyist Lisa McGill and businessman John McGill – are exceedingly well-connected at the S.C. State House.

Lisa McGill also has extensive political experience, including a stint as campaign manager for former U.S. Senate candidate Thomas Ravenel (in 2004, when he was a serious candidate – not 2014).

Add it all up and McGill’s candidacy is shaping up to be far more formidable than we would have originally expected.

Aside from McGill, S.C. Rep. Tommy Pope – the No. 2 “Republican” in the S.C. House of Representatives – is the only other announced candidate in the race.

That will change soon, though …

Other names are likely to be floated in the weeks and months to come … in fact we’re preparing another story this week about a potentially formidable candidate who hails from the Midlands region of the state.

Stay tuned … this race is slowly but surely starting to get interesting.

At Least 9 Injured In Shooting At Hampton County Nightclub