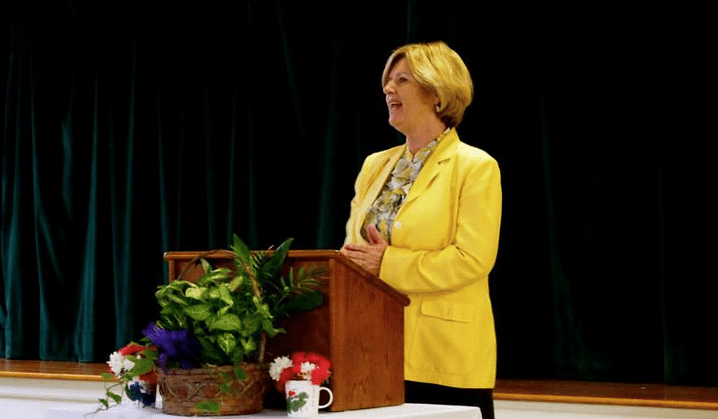 A DEMOCRAT RUNNING AS A REPUBLICAN: WILL IT WORK?

We love Molly Spearman … as a person. She’s affable, bright, engaging … all traits that are very advantageous for a public official.

Unfortunately, we don’t like Molly Spearman as an ideologue. In that regard, she is slightly to the left of where we’d imagine the love child of Chairman Mao and Jane Fonda to be. Which is not a good place.

The executive director of the uber-liberal S.C. Association of School Administrators (SCASA), Spearman is among the most powerful leaders of the Palmetto State’s taxpayer-subsidized “education establishment,” a bureaucratic lobby dedicated to propping up (or trying to prop up) the worst government-run education system in the entire country.

In Spearman’s world, taxpayers should continue shelling out $10 billion a year to produce abject, generational neglect – while the “educrats” responsible for this ongoing failure take taxpayer-funded vacations to the beach summer at her lavish coastal conferences.

So as much as we like Spearman the person … we wouldn’t vote for her as dogcatcher if hers was the only name on the ballot.

The latest evidence of Spearman’s true ideological bent? The (Charleston, S.C.) Post and Courier has an post up this weekend mentioning Spearman’s September 2013 political contribution to S.C. Rep. Mike Anthony’s bid for S.C. Superintendent of Education.

Anthony, a dyed-in-the-wool Democrat, later dropped his candidacy … right around the time Spearman indicated she was going to seek the same post as a Republican.

But while people keep expressing shock at this, Spearman isn’t that much different than the vast majority of GOP elected officials in South Carolina.

Welcome to the so-called “Reddest State in America,” right? Where our so-called “Tea Party governor” has advanced a fiscally liberal agenda on taxes, spending, education and (most notably) government-subsidized health care – and where our so-called “Republican-controlled” legislature (led by former Democrats like S.C. Senate finance chairman Hugh Leatherman) continues to tax and spend recklessly. And corruptly …

Oh and duh … Lindsey Graham. Come on people: Graham was the only GOP lawmaker in Washington, D.C. (House or Senate) to embrace Barack Obama’s War on Energy.

Yet he’s running for reelection as a “conservative?”

As it relates to Spearman’s experiment (which may have more in common with Graham’s reelection bid than some would like to admit), people keep asking us “what in the world is a Democrat doing running in a South Carolina Republican primary?”

That’s not the real question, though …

The real question is: “Why are hundreds of Democrats already serving in elected office in South Carolina … as Republicans?”

The answer? Easy: There’s not a dime’s worth of difference between the two parties on the bread and butter fiscal issues that ought to matter to voters …