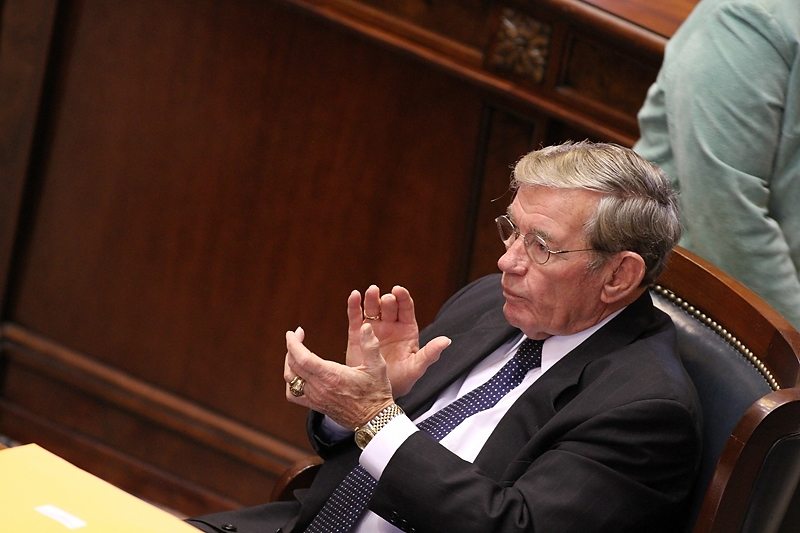 The most powerful politician in South Carolina has had enough.

After failing to pass a gasoline tax hike in 2015 and 2016 – and seeing his coveted transportation slush fund exposed for what it is – Hugh Leatherman is fed up with the obstruction of his rampant corruption.

The diminutive liberal leader – who has seen his power surge during the recently-concluded “Republican” primary elections – is making a major play to reassert total control over the South Carolina Senate.

The influential Senate president – who doubles as chairman of the chamber’s powerful budget-writing finance committee – has hand-picked a panel of seven lawmakers and charged them with recommending rules changes for the upcoming 2017 legislative session.

Leatherman’s panel includes liberal Democrats Nikki Setzler, Gerald Malloy and Brad Hutto – all of whom are masters of obstructionism.  He’s also named “former” Democrat Luke Rankin – who is in line to become the next chairman of the powerful judiciary committee – and liberal “Republican” squish Ronnie Cromer.

One Leatherman antagonist – S.C. Senator Shane Massey – was appointed to the panel, although he’s obviously outnumbered.

Also, he told The (Columbia, S.C.) State newspaper that the current Senate rules “contribute to some of the tension and deadlocks that we have in the body.”

In other words, he’s singing off of Leatherman’s sheet of music … like the rest of them.

Same with “good government” advocate John Crangle of Common Cause, who told The State that the “reforms” Leatherman is currently pushing are “long overdue.”

The point of all this?  Shutting down S.C. Senator Tom Davis, a fiscally conservative second-term Senator from Beaufort, S.C. who has successfully led the charge to block gas tax increases in each of the last two years.

Is Davis a legislative obstructionist?  Maybe … but as we’ve repeatedly pointed out, the facts are on his side.  He’s taken principled stands on behalf of taxpayers in support of those facts – and his efforts have paid off.

Now Davis is being singled out for his effectiveness as a taxpayer advocate – a sign that he has become too powerful for Leatherman’s liking.

Frankly, we view this transparent attempt to shut Davis down (ostensibly in the name of “good government”) as the latest in a long line of insider scams – with The State newspaper once again parroting the liberal leader’s propaganda.

Also, it’s laughable that “obstructionism” in the State Senate is suddenly a problem that must be addressed immediately while glaringly unconstitutional borrowing bills depriving taxpayers of hundreds of millions of dollars a year are treated as perfectly acceptable.

Hopefully Davis and other Senators will stand up to this attempted coup and preserve their right to block bad bills from becoming law.