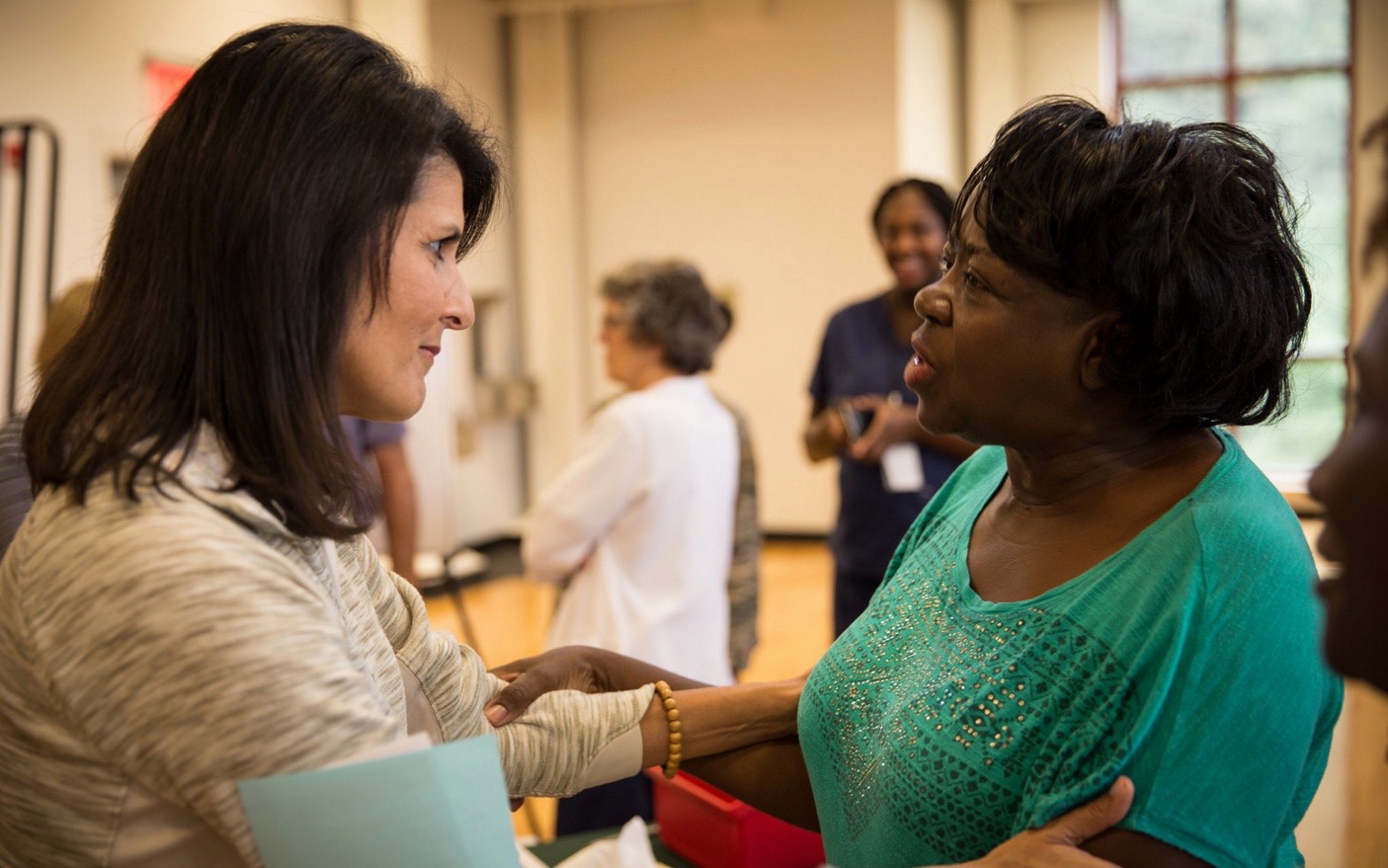 GOVERNOR’S NASCENT VICE-PRESIDENTIAL CAMPAIGN IS ALL OVER THE MAP …

He added “there are two paths you can go by,” and “in the long run there’s still time to change the road you’re on.”

And yes … it made him wonder.

Obviously we know (intimately) that S.C. governor Nikki Haley is more of a fan of John Mayer‘s music, but she did follow Plant’s advice this week … or at least she tried to.

Here’s how Haley’s long and winding road began: In the intensifying battle between the “Republican” establishment and the GOP electorate – Haley came down squarely on the side of the status quo this week.  In her high-profile response to U.S. president Barack Obama‘s final State of the Union address on Tuesday evening, Haley explicitly criticized GOP frontrunner Donald Trump (and his supporters) – drawing considerable ire from the GOP’s conservative base.

Haley basically came off as another Obama – essentially telling all of those voters who are frustrated with the direction of the country to simmer down.  In fact, she went so far as to associate their anger with the sort of violent hate that inspired last spring’s murderous rampage in Charleston, S.C. – brutal slayings perpetrated by a white supremacist.

Haley’s “tone it down, people” remarks won plaudits from the Beltway insiders, as expected, but earned deserved scorn from those of us who are legitimately frustrated with Washington’s bipartisan boondoggling.

Faced with growing negative fallout from her remarks, did Haley stand firm in her convictions?  No … she waffled.  Backtracked.  Walked back.

And poorly, at that …

First of all, Haley – who is having all sorts of problems remaining consistent on the immigration issue herself – blasted the ever-evolving position of U.S. Senator Marco Rubio regarding mass amnesty.

“Marco Rubio believes in amnesty, which I don’t,” Haley said.

That criticism came as a surprise to many seeing as Haley previously told reporters she and Rubio were in frequent contact, and that he was “supportive” of her attack on Trump – and “appreciated” what she was doing.  It was even more surprising seeing as Haley’s big national speech was viewed by many as an establishment payoff for an eventual Rubio endorsement.

Haley made her negative remarks about Rubio and amnesty at around 3:00 p.m. EST on Wednesday of this week.  A little over four hours later, she flip-flopped.

Haley also missed the mark in attempting to counter Trump’s call for a temporary ban on Muslim immigration to America.

“When you’ve got immigrants who are coming here legally, we’ve never in the history of this country passed any laws or done anything based on race or religion,” Haley said.  “Let’s not start that now.”

That’s not true, though.

Numerous race-based immigration restrictions were passed in the aftermath of World War I, and during the peak of the Iran hostage crisis former U.S. president Jimmy Carter proposed a ban on the immigration of Shiite Muslims.

Left-leaning websites were eager to give Haley the benefit of the doubt, though.

“Haley can be forgiven for not knowing about this or other examples of restrictive immigration laws,” Kevin Drum of the liberal website Mother Jones wrote.  “It’s not especially common knowledge these days. In any case, she obviously wasn’t pretending that Jim Crow and its ilk never existed.”

Drum added that Haley’s misstep was “hardly a big deal” because she was “doing the Lord’s work, criticizing Donald Trump’s call to bar Muslims from entering the country.”

Not all “progressives” were so understanding, though.

“Taken together, politicians have had smoother introductions to the national stage,” left-leaning pundit Steve Benen wrote for MSNBC.  “Over the course of about 12 hours, Nikki Haley managed to divide her own party, blast some of her allies, clumsily walk back the criticisms, and misstate the details of immigration policy she claims to understand.”

Ouch.  Benen added that Haley “probably didn’t do herself any favors” with GOP candidates and party officials who were “watching closely” to see how she fared under the glare of the national spotlight.

In addition to her Rubio misstep, Haley “didn’t do herself any favors” with the campaign of another establishment “Republican.”

In further attempting to distance herself from the mushy middle of the GOP she so wildly embraced earlier this week, Haley took after former Florida governor Jeb Bush for his support of the federal government’s Common Core academic standards.

“Jeb Bush passed Common Core,” Haley told reporters, citing it as one of the “disagreements” she has with establishment candidates.

Really?  Has anyone bothered to look at the governor’s recently unveiled education plan?

Anyway, Haley walked back that attack, too …

Bush backers were not appeased … at all.

Welcome to the veepstakes, Nikki Haley.

Right or wrong Palin has a ‘world view’ and never wavers.Haley is all over the place seeking power.

Her world view is how much money she can dupe out of the suckers who still support her.

Huh, Sarah ‘never *waivers’ Palin quit on the people who elected her half way through her term as Governor. Her family is made up of a bunch of drunk redneck trash. What is her world view? Besides “How can I enrich myself by any means necessary?”

How do you know when you are at a “redneck zoo” — The signs in front of the exhibits show the common name, the scientific name, and recipe suggestions…..

Trickki Niikki’s political career is done unless she flips & becomes a Democrat. Her ’16 SOTU response albatross will hang around her neck forever just like Little Marco’s Gang of Eight one.

Damn. Now she and her gang have to move back to Lexington. There go the property values.

Don’t they have some kind of temple in Orangeburg or something?

One can only hope.

The temple is on Broad River Road off of I-26 heading for Chapin. I still want the answer to: “What happened to the missing $50,000 from the temple’s renovation loan? Nikki was “keeping the books”

With Danny Frazier and Halfacre off of town council, maybe Lexington has room for a highly corrupt new member on board.

Ha! Remember little Marco’s escapade with the water bottle in his SOTU response? Isn’t stopping him.

Something something about squeezing a lemon …

She should switch either to Pumps or Mules

Of course maybe no one has advised her that when you take point in any endeavor the odds of survial drop like to, like shit I ain’t going to survive this shit, man why did I let them talk me into doing this shit, shit I am a goner, deader than shit, shit

It might be time for her to take her act to Bollywood and shake that flabby ass of hers on the silver screen.

She’d probably have to get her teeth fixed first, then a boob job- but I hear Lexington Medical owers her some favors.

She could get a plastic surgeon recommendation from nude model, Melania Trump.

I think the hospital is through with NIMRATA!

They are only through when SHE says they are through.

Maybe her family will now get her the help she needs.

A turkey baster to be used as a spooge-snatcher?

“Did they get you to trade your heroes for ghosts?”

If you have to listen to John Mayer while you’re getting a BJ,it doesn’t count.

But, NIMRATA has ASSets large enuf to cover all the Repub front runners!
YOU BETCHA!
I CAN SEE THE STRIPPER POLES IN AUGUSTA FROM THE TOP OF MY SHED!

In fact, she went so far as to associate their (frustrated voters) anger with the sort of violent hate that inspired this murderous rampage – perpetrated by a white supremacist.

Fitsnews has made this claim on several occasions, but it is clear from my interpretation and by those I have read in the media that Haley was not comparing “frustrated voters” to Dylann Roof or racists cops.

Nikki Haley was comparing the “loudest voices”, like Trump to the (sometimes violent) protesters in Ferguson Mo. and Baltimore and the more civil candidates to the vigils and hugs of the Charleston community.

Now, there may be good reason to take issue with that comparison, but there is a huge difference.

She ended her national political life Monday night.All that is left is how much she continues to do damage to herself with her ever changing policy shifts and opinions.

You low intellegence, racist voters really overestimate the influence you think you have.
You are a shrinking minority. Bye, bye!

Interesting that the dumb hick Carter knew the difference between Shiites and Sunnis but Dick and Dubya didn’t.

Seriously having problems understanding the Nikki hate here. If you don’t like her the absolute best thing that can happen is she progresses to V-POTUS (the biggest nothing job on the planet) or to an ambassordship to India or some other South Asian backwater never to be heard from again. Encourage her to take leave of the state on 1/21/2017 for bigger and better things.

I must disagree. The best option is for her to become so irrelevant and unmarketable, that she fades forever into political and social obscurity.

She’s done enough damage and corruption in her present station in life. We needn’t reward that with higher, more lucrative positions where she can continue her destruction from.

Nikki for veep? LOL! With little in-state investigative journalism outside of FITs, and a few others, especially the MSM, if Nikki were named to the ultimate ticket as veep candidate, it would take only a few days of vetting before the national media makes mincemeat of her, making Palin in comparison appear to be a giant of statesmanship.

Why compare her to Palin. Haley fully served both of her elected terms. She has accomplishments to run on. Sarah had none.

Haleys problem is she still attends Sikh religious functions in full Sikh regalia and claims to be a Christian. …cant have it both ways and keep company with Trump and Cruz go back to being a low level player there in your home state young lady.

She’s acting accordingly. Trump is a liberal pretending to be a conservative. Cruz is pawn of the NYC mega-banks while pretending to ge an ‘outsider’. He’s also pretending that he’s a natural born citizen. See? She fits in perfectly!

I like the screenshot of Haley with van Susteren. Those lips look familiar, Will?

— didn’t know that Will had ever met Greta

Nikki always supports symbolism over substance. She’s yet another liberal Republican, saying that she ain’t one.

The only reason Haley is not for something is because she has not, yet,received a check.

She’s a serial cheater but don’t forget she is also a family values Christian lol. …you just can’t make this stuff up:)

I don’t think she is trying to seek a VP nod. I believe she is after the Indian Ambassador position, or some other equally cushy overpaid, under worked, bureaucratic department head slot. She’s just a figurehead, no real leadership or management abilities.

Haley is fucked up in the head, and the masses see it. There is no place for her anywhere in politics. Her standard of living is going to drop 60%.

Looking forward to that day!!!!

I think Nikki recognizes her own level of South Carolina Stupid. Around here she can pass for average. Nationally, the truth cuts like a knife.