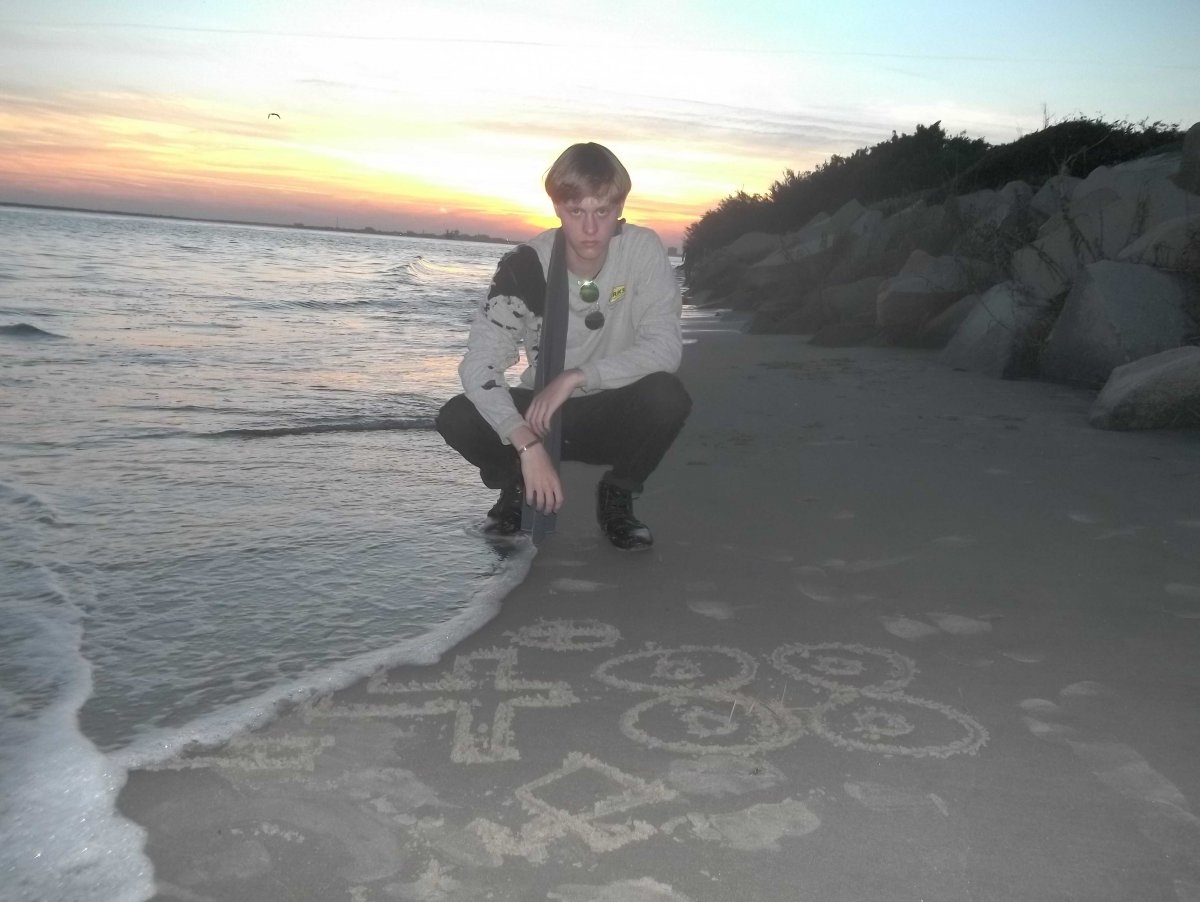 Maybe it’s Donald Trump‘s devil-may-care presidential bid, maybe it’s something else … but we’re done playing along with the narrative.

Over the course of the last month, this website led the media charge to take down the Confederate flag in South Carolina. We were the first media outlet in the state to call for the banner to come down, the first to suggest how it could be accomplished sooner rather than later and the only outlet to explain the real historical context behind this divisive debate (here and here).

It boiled down to this: We didn’t think the flag should have ever been “re-hoisted” in the first place.  And to the extent we were indifferent about its presence over the years, we came to believe our indifference wasn’t sufficient justification to continue needlessly offending people.

Basically that’s the same view advanced by S.C. Rep. Michael A. Pitts, who emerged as the leading defender of the flag during the recently concluded legislative debate over the banner.

But given the way that debate played out – and given the latest developments in the case of the criminal case which led to the flag’s removal – we’re almost to the point of regretting our advocacy.

At the very least, we’re ready to lay out in no uncertain terms what we really believe caused the tragedy which led to the flag debate.

Guess what: It wasn’t racism.  Nor was it guns.  Nor was it drug abuse.  Or mental illness.  And it sure as hell wasn’t a flag.

And it’s time to start saying all these things … loudly, clearly and unapologetically.

On June 17, 2015 at around 9:00 p.m. EDT, a 21-year-old white supremacist named Dylann Storm Roof pulled a Glock 41 .45 caliber handgun from under his shirt and began opening fire on those who had gathered inside the Mother Emanuel AME church in Charleston, S.C. for a weekly Bible study.

The jobless, troubled drifter had been sitting alongside Mother Emanuel’s pastor, S.C. Senator Clementa Pinckney, for nearly an hour when he launched his attack.  They had been praying.  Reading God’s word.  Searching for answers.

Roof later said he almost didn’t go through with it because everyone in the church “had been so nice” to him.

But he did go through with it, hoping to incite a “race war” that would advance his recently acquired white supremacist world views.

Incidentally, speaking of Roof’s intended outcome, the world owes the family and friends of his victims an incalculable debt of gratitude.  Their willingness to extend Christian forgiveness to this unrepentant murderer – who slaughtered their loved ones in cold blood – is probably the most inconceivably beautiful thing we’ve ever seen.

It stands as the very definition of saving grace – whether Roof ever accepts that grace or not.

It also probably saved South Carolina from going up in flames …

Anyway, we’ve frequently referred to this crime as “horrific” and “racially motivated.”  Because it was. We’ve also used terms like “calculated,” “premeditated,” and “gruesome” to describe it.  And yes, Roof had some issues with drugs.  And probably mental illness too.  But those factors – along with his ridiculous flag-toting pictures and sophomoric references to white supremacist regimes in Africa – are at the fringes of what really precipitated this violence.

The real killer is something far more sinister (and far more widespread than we know): It’s desperation. Fear.  And yes, ignorance.

Which our culture is breeding.

And all of those things are ultimately flowing from the same place, a pervasive erosion of economic opportunity that’s impacting all of us … and which is only getting worse.  Yet while we are all in this fight together – white and black, man and woman, gay and straight – we continue to be conditioned into believing the enemy is “us” (or subsets of us).  You know, as opposed to a corrupt, debt-addled political establishment that’s crushing our futures – and a supplicant mainstream media establishment serving up ready-made scapegoats in an effort to divide and deflect the blame.

During a recent radio appearance in the Pee Dee region of South Carolina, this website’s founding editor Will Folks was asked to assess the Palmetto State’s fundamental problem.

“We’ve got far too few people working – and the ones who are working make far too little,” he said.

Indeed.  South Carolina’s labor participation rate is among the nation’s worst – as are its income levels.  Our state is dirt poor, uneducated and held back by an antiquated government structure.  And while that structure may have been borne in Jim Crow racism, it has been preserved and expanded by white and black lawmakers with equal zeal.

Failure – economically, academically and with respect to our quality of life – has been greeted for decades by bigger government, more bureaucracy and a bigger bill for taxpayers.  Which has gutted opportunity and wealth creation for all but a privileged few.  It didn’t matter whether Democrats or Republicans were in charge, the answer in South Carolina to any problem has always been the same: Throw more money at it.

Not surprisingly, doing the same thing over and over … has changed nothing.  In fact it’s only made things worse, squandering the work ethic of our people, the fruits of their labor and our state’s abundant natural resources.

We’ve pissed away our state’s many competitive advantages … with the result being a third world banana republic that leads the nation in all the wrong categories.

You know, like the number of mobile homes.  Not coincidentally, it was in one of these prefabricated abodes of hopelessness that the unemployed drifter Dylann Roof plotted his attack.

Roof slept on pillows on the floor.  He drank vodka.  Played video games.  Surfed the web on his computer.  According to the government, he was what’s known in surveillance state lingo as a “self-radicalized lone wolf.”

The event that truly awakened me was the Trayvon Martin case. I kept hearing and seeing his name, and eventually I decided to look him up. I read the Wikipedia article and right away I was unable to understand what the big deal was. It was obvious that Zimmerman was in the right. But more importantly this prompted me to type in the words “black on White crime” into Google, and I have never been the same since that day. The first website I came to was the Council of Conservative Citizens. There were pages upon pages of these brutal black on White murders. I was in disbelief. At this moment I realized that something was very wrong. How could the news be blowing up the Trayvon Martin case while hundreds of these black on White murders got ignored?

But the question no one is asking is … why?

What launched this chain of events?

It’s been said idle hands are the devil’s workshop.  Well Roof’s hands were idle.  And on top of that his mind was feeble.

Seriously: Other than those of us in the media (or paid agitators), who sits around and obsesses over the intricacies of the Trayvon Martin case?  Who spends hours on the Internet googling “black on white crime?”  Or pouring through “pages upon pages” of search results?

Certainly not someone with a job.  Or real responsibilities.

People with productive lives have no time to get lost in the weeds of the web.

“He spent a lot of time on the Internet – and believed everything that was in it,” one told The (U.K.) Daily Mail.

And yes, the internet is full of scapegoats … with fringe sites on the left and right giddily stoking the same division that’s being advanced by the mainstream media.

Does any of this excuse Roof’s conceiving of such an attack – let alone his carrying it out?  Hell no.  Never in a million years.  Nor does it even excuse the initial scapegoating and radicalization which precipitated the planning and execution of his barbaric assault.  Roof (and Roof alone) is responsible for how he chose to respond to his circumstances … and we continue to believe he should pay for his choice with his life.

But killing Roof isn’t going to address these underlying circumstances any more than lowering the Confederate flag did.

It’s justice … but it’s not a solution.

In other words it will make a lot of people happy, but it’s not going to improve their lives.

Many will dispute the basic premise of this column.  Or find it insensitive.  Or outlandish.  Or an excuse for us to promote our libertarian economic views at the expense of a tragedy.

Okay.  We get that.  But if that’s your response, then you ought to know what’s been written here is comparatively mild.

Let’s not forget how the “secular humanists” responded to the Holy City Massacre.  Oh, and consider this headline (also emanating from the far leftward reaches of the political spectrum) … 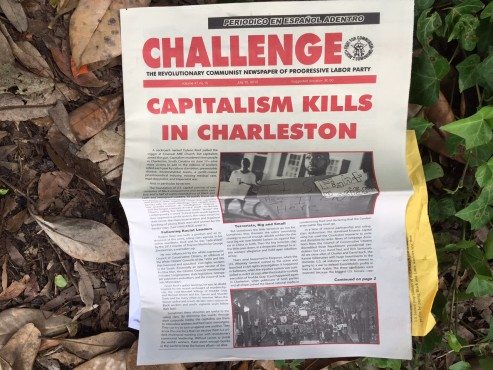 Yeah.  That’s sort of what we’re saying … in reverse.

Oh, and let’s not forget U.S. president Barack Obama and presumed 2016 Democratic frontrunner Hillary Clinton – who couldn’t wait for the blood on the floor at Mother Emanuel to dry before blaming the whole attack on people’s access to guns.

Never mind that it was the federal government’s own background check system which screwed up and allowed Roof to purchase a gun.

Now the government is pushing to add “hate crimes” to the existing state charges against Roof, arguing “the Charleston shooting was so horrific and racially motivated that the federal government must address it.”  And that federal officials “believe that a murder case alone would leave the racial component of the crime unaddressed.”

Anyone who takes another human being’s life is guilty of a hate crime.

The racist nature of Roof’s crime is indisputable and unavoidable.  And he will be held accountable for it.  Likely (hopefully) with his life.  Imposing such duplicative prosecutorial authority in this case serves no purpose other than to inflame tensions.

But that’s the point is it?

The federal government and its propagandists in the fourth estate don’t want “teachable moments.”  They want to keep propping up the establishments creating the economic malaise.  And once they’ve sucked every bit of life out of taxpayers, that’s when they start amplifying the scapegoating.

And why not?  Keeping the working poor and middle class (of all races, religious, genders and sexual orientations) hopelessly and eternally divided serves their purposes.

Bottom line: They want the race war every bit as much as Roof does.

As the debate over the Confederate flag wound down, this website began urging lawmakers to start showing the same urgency in addressing the state’s chronic economic, academic and quality of life issues that they showed in addressing the since-removed banner.

But that’s never going to happen.

The status quo will never allow widespread tax relief because then it wouldn’t be able to afford billion-dollar handouts for Boeing.  Nor will it ever allow parental choice to truly flourish because doing so would vaporize the vast majority of its patronage – to say nothing of its ability to continue indoctrinating our children.

And the mainstream media will never truly expose these evils because it’s getting fat off the special interest tax breaks, too.

You see, they know better than you.  And they’ll keep dumbing you down … so you never forget it.