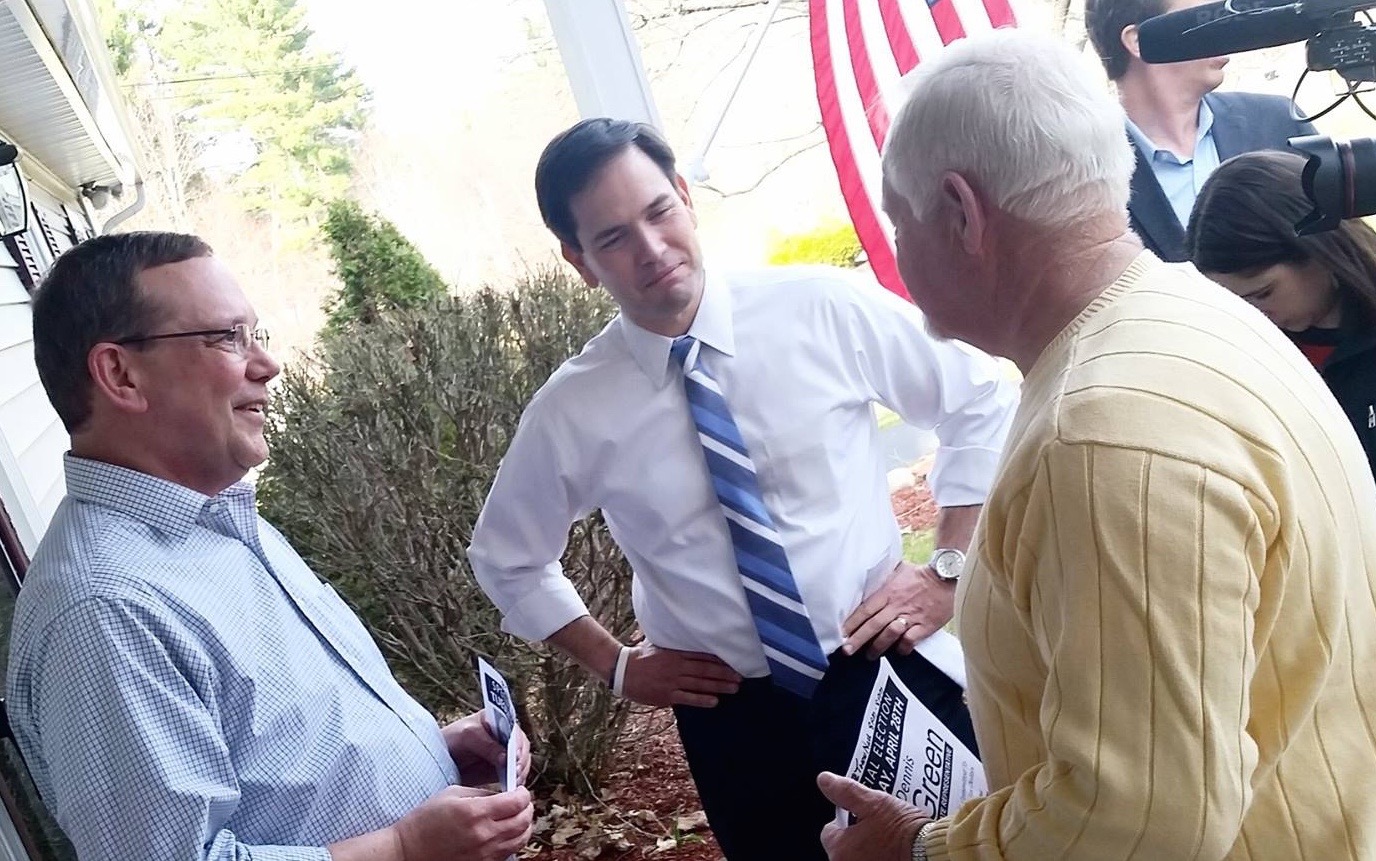 || By FITSNEWS || If you’re a “Republican” primary voter, chances are U.S. Senator Marco Rubio isn’t going to tell you much about his involvement in a failed 2013 immigration reform effort.  In fact according to McKay Coppins of Buzzfeed, all Rubio offers 2016 voters on the issue is “a few stilted talking points” before “angling to change the subject.”

Why would he do that?  Because GOP primary voters didn’t like the bill he backed … and they especially didn’t like the executive overreach Barack Obama employed in responding to it (or the capitulation of the GOP House in response to that).

Rubio was an aggressive supporter of immigration reform – and one of only fourteen “Republicans” in the U.S. Senate to vote for it (South Carolina’s own liberal Lindsey Graham was another).

Yet while Rubio is hoping primary voters – especially “First in the South” voters – forget all about the legislation, his campaign is reportedly using it to rake in big money from establishment “Republican” donors.

“As Rubio labors to publicly distance himself from the legislation so loathed by conservative primary voters, he and his aides have privately highlighted this line in his resume when soliciting support from the deep-pocketed donors in the party’s more moderate business wing,” Coppins reported.

And while Rubio won’t talk about it on the stump, one of these donors told reporters earlier this year that “he has not backed away from wanting immigration reform at all.”

In other words Rubio is cashing in on his left-of-center voting record so he can buy a bunch of ads telling us what a “conservative” he is … knowing full well that he’s only going to “flip back” after the primary.

Oddly enough, this website has never breathed fire on the issue of illegal immigration.  We’ve consistently urged pathways to status and other “progressive” reforms as possible solutions – although we’ve always acknowledged that border security (i.e. turning off the illegal alien spigot) is one of the few things government is supposed to do.

Our beef with Rubio?  It’s not necessarily his views on this particular issue … it’s the fact he’s being two-faced.

Yet another reason, in our estimation, to oppose his candidacy.

Marco. you need the same lawyers and Advisers the Clinton’s use.

Rubio won applause from conservatives in South Carolina when he scolded immigration activists for interrupting his speech at a Republican fundraiser. “You’re doing harm to your own cause,” he told the protesters, who identified themselves as immigrants brought illegally to the country as children. “You don’t have a right to illegally immigrate to the United States.”

In a series of appearances on Fox News and conservative talk radio, Rubio has embraced GOP calls to bolster security and deploy the National Guard along the Mexican border to respond to the arrival of tens of thousands of Central Americans.

On a recent tour through central Florida, an important swing-voting region with a fast-growing Latino population, Rubio told reporters in English and Spanish that his emphasis on border security is an acknowledgement that House conservatives do not support a comprehensive immigration bill.

His record – Supported – no – lead the Gang of 8 Immigration Reform Bill, ran away from it, wanted to deport kids who lived nearly their entire life here, wanted to deport their parents, then back tracked again, and now wants to let the kids get codified legal residency immediately, and provide their parents with a pathway to citizenship. He’s like a ship going in circles. Next week he’ll advocate conentration camps for undocumented immigrants if he’s in SC. Then back in FL he’ll profess his love for them.

Who isnt? But he has many great things going for him. Immigration is a thorny issue worldwide, and at least America is thinking about doing something about it. It will take us all coming together on this and some give and take. There is no silver bullet for this.

Rubio urged President Barack Obama not to take actions that would shield from deportation millions of people who entered the U.S. illegally. Congress, Rubio said, should first “make real progress on stemming the tide of illegal immigration.”

Rubio’s aides say the senator always has stressed border security and that he insisted on tougher enforcement measures as a condition for his Senate vote last year.

Sounds reasonable to me.Maybe not to liberal socialists.

You need to read up, Rubio has changed his tune on all of that.

That stroke or mini strokes Hillary had/is(?) having are really making her appear deranged…too bad you dont have another candidate that isn’t a socialist american hater…

We asked you, but you turned it down. So we have our second choice, Jeb.

Don’t you clowns have a radical Islamist in the wings? All those trips to the wHite House by the Muslim Brotherhood and all you have is Biden and Warren?

We don’t have any, no. Herman Caine is yours.

NOTE & WARNING: The links provided below contain direct quotes from Obama and his officials.

The Left-Leaning LA Times posted an article that shows that the Obama administration, the Illegal Alien lobby, and the major media outlets have been in collusion to depict the “high” deportation numbers. The exact opposite is true since the beginning of the current President’s policy. Interior deportation has and will be lower than 1973 rates. This is leading towards more people overstaying their visas and currently, more Illegal Alien minors crossing the border. Obama has just recently instructed border patrol to not turn back those Illegal Aliens on record as having entered illegally as priors, but to let them pass IF they don’t have a major criminal record. After the first Illegal Entry, it is a felony each time thereafter.

Even Obama in 2011, called the deportation numbers deceptive when talking to Hispanic voters. President Obama said statistics that show his administration is on track to deport more illegal immigrants than the Bush administration are misleading.

“The statistics are a little deceptive,” he said Wednesday in an online discussion aimed at Hispanic voters.”

“If you are a run-of-the-mill immigrant here illegally, your odds of getting deported are close to zero — it’s just highly unlikely to happen,” John Sandweg, until recently the acting director of Immigration and Customs Enforcement

http://www.washingtontimes.com/news/2015/apr/13/immigration-chief-sanctuary-cities-influx-kids/
“The federal government’s chief deportation agency has seen its success plummet under President Obama, and its chief, Sarah R. Saldana, will tell Congress on Tuesday that they’ve had trouble adapting to the changing face of illegal immigration and a lack of cooperation from both American cities and from foreign countries.

Ms. Saldana, director of U.S. Immigration and Customs Enforcement (ICE), says in testimony prepared for the House Judiciary Committee that the dramatic drop in deportations is a reflection of a trickier set of circumstances and pressures from all sides.

She said she had to pull agents off their regular duties during last summer’s illegal immigrant surge at the border, which meant fewer people focusing on deporting the longtime illegal immigrants living in the interior of the U.S. And she said the lack of cooperation from states, counties and cities when agents ask them to hold an illegal immigrant for pickup has also hindered efforts.”

For the record, Marco’s most recent flip flop, is that now he is for a legislative replacement for DACA policy for Dreamers, and promises that he will NOT repeal DACA until a legislative solution including a pathway to citizenship, is in place. In otherwords, he called for DACA to be repealed last year, but now he says as President, he will not reverse DACA, only retire it once Congress passes a DACA bill. This guy is all over the map.

Your whole post is false and a lie.Rubio is very clear on immigration…
p.s. Muslim Obama just killed a Jewish hostage in a drone strike…imagine that…he couldn’t even wait until he gave Iran the nukes and $50 billion…

It is not false. In a Spanish language interview this week – “I believe DACA is important. It can’t be terminated from one moment to the next, because there are already people benefiting from it.”

Back to the Spanish language interview Rubio detailed a process where the remaining undocumented immigrants would receive initial work permits (like Obama’s executive order), then after that, he adds, “And after a substantial period of time in that status, assuming they haven’t violated any of the conditions of that status, they would be allowed to apply for legal residency. Just like anybody else would” Then, he said, “After you’re a legal resident, after a number of years by law, you’re allowed to apply for citizenship.”
So sorry Flip, you are not fully informed.

By the way, the wait period once resident status to apply for citizenship – is five years. Now, in the words of the President of the United States – “please, proceed……”

“President Obama’s unconstitutional use of executive power to accomplish what he couldn’t do in Congress sets a dangerous precedent that threatens the fabric of our republic,” he said in a statement Thursday.”

judge,5th circuit and then SCOTUS…no immigration reform after election because SCOTUS will have made point moot….

Marco just told you he’s all for it. What planet are you on. And you know Jeb is, he’s got a whole family of in-laws dependant on it.

Word today is North Korea can hit California with a nuke…if that happens maybe the Clinton Foundation can buy California and rename it Pedroville?49 states and Pedroville can be a new country…all the illegals you want…lmao

http://www.washingtonpost.com/blogs/monkey-cage/wp/2015/02/27/opposition-to-immigration-reform-is-a-winning-strategy-for-republicans/
“By any measure, fears of (Illegal) immigration are driving many white Americans to the Republican Party. And, indeed, the Republican strategy on immigration appears to have been successful. Republicans now control the House and the Senate, the governor’s office in 31 states, and two-thirds of the state legislatures. They are winning the political war.”

“An even bigger factor is that the ties of racial and ethnic minorities to the Democratic Party are tenuous. Research by Taeku Lee and myself shows that most Latinos and Asian Americans don’t feel like they fit into either party. In national surveys, those who refuse to answer a question about party identification, those who claim that they do not think in partisan terms, and independents make up the clear majority of both groups. All told, 56 percent of Latinos and 57 percent of Asian-American identify as nonpartisans.

Even among blacks, there are signs of ambivalence. Almost 30 percent of blacks feel that the Democratic Party does not work hard for black interests.”

Gee, No wonder why I fall into the Proud Independent group.

Talk about being Two-Faced:
The Liberals’ Case AGAINST Illegal Immigration:

This is the Progressive Case AGAINST Illegal Immigration:

http://beforeitsnews.com/opinion-conservative/2014/11/didnt-anyone-in-the-hispanic-media-read-obamas-book-2936030.html
Didn’t anyone in the Hispanic media read Obama’s book?

But when that same Tea Train takes his head off for him
he’ll be back again to looking for another safe nation !!!