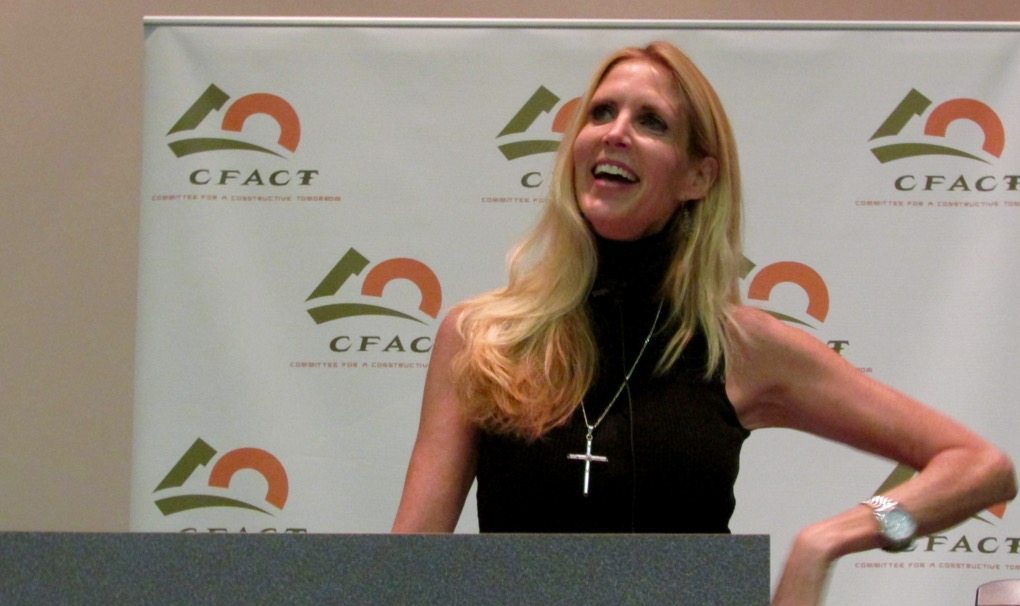 This website has never been especially keen on conservative commentator Ann Coulter.  In fact back in the day we even made fun of her appearance once – likening her to an “emaciated giraffe.”

Ouch … (to our credit, though, we re-thunk that view).

Of late, we’ve come to appreciate Coulter’s blunt criticism of the “Republican” elites in Washington, D.C. – which is often in line with our own criticism.  This week Coulter took direct aim at the new face of the GOP establishment – S.C. governor Nikki Haley – whose national audition as the leading critic of the conservative wing of the party didn’t go so well.

After blasting Haley’s immigration record, Coulter kicked it up a notch in an interview with Fox News radio this week – calling her a “bimbo.”

“Hold on Annie, I’ve got to stop you there,” host John Gibson said.  “Annie, Annie, you just called her a bimbo. I don’t think that’s kosher.”

“What do you mean kosher? Is it true or isn’t it? … You’re policing my language? I’m saying something I think is true,” Coulter said. “I think she is a bimbo. Do we have to add that to the list of words that can’t be used now? Because the list is getting bigger than the dictionary.”

Gibson again rebutted, saying “it describes a certain kind of person which I don’t think fits her.”

“Yeah,” Coulter responded.  “A not very bright female.  Actually, they are not always females but they often have those qualities, these feminine qualities.”

“Well, can we proceed without calling her that kind of name?” Gibson implored.

“Can you email me of list of what words can’t be used … Bimbo?” Coulter countered.  “It’s going to be hard to describe how she was chosen. She is a woman who was accidentally elected because she’s pretty and isn’t very bright, can we say that?”