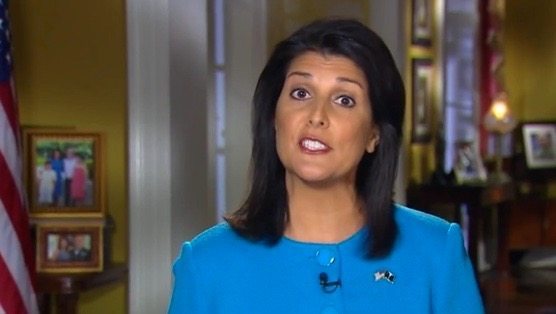 S.C. governor Nikki Haley used her nationally televised response to U.S. president Barack Obama‘s final “State of the Union” address to call on “Republicans” to ratchet down their rhetoric.  In fact, Haley used a June 2015 racially-motivated mass shooting in Charleston, S.C. as a pretext for calling on calm and quiet among the electorate.  She even managed to invoke the removal of the Confederate flag (a banner she previously supported) as part of her plea for “lowered voices.”

“We removed a symbol that was being used to divide us, and we found a strength that united us against a domestic terrorist and the hate that filled him,” Haley said.

That’s true … but her illogical extension of this otherwise valid point is troubling.  Very troubling.

“There’s an important lesson in this,” Haley said of the response to the Charleston shooting.  “In many parts of society today, whether in popular culture, academia, the media, or politics, there’s a tendency to falsely equate noise with results.”

“Some people think that you have to be the loudest voice in the room to make a difference,” Haley added.  “That is just not true. Often, the best thing we can do is turn down the volume. When the sound is quieter, you can actually hear what someone else is saying. And that can make a world of difference.”

Wait … so those of us raising our voices to protest the bipartisan screw job in Washington, D.C. are one step removed from white supremacist mass murderer Dylann Storm Roof?

Apparently so, according to Haley – who used the address to reinvigorate talk of her possible ascension to a national ticket.

In addressing the immigration issue previously in her remarks, Haley made a similar comment – saying that “during anxious times it can be tempting to follow the siren call of the angriest voices. We must resist that temptation.”

In case there was any confusion as to who she was referencing with these “simmer down” comments (ahem, GOP presidential frontrunner Donald Trump), Haley removed any doubt during an interview on Wednesday morning.

“Mr. Trump has definitely contributed to what I think is just irresponsible talk,” Haley told Matt Lauer on The Today Show, but she added that he wasn’t “the only one.”

“There’s other people in the media, there’s people in my state, I think we’re seeing it across the country,” she said.

People in her state? Hmmm ….

Wonder who she’s talking about there …

Frankly, this sounds a lot like the establishment “response” offered by U.S. Rep. Jim Clyburn back in 2011 following the shooting of former U.S. Rep. Gabrielle Giffords in Arizona.  At the time, Clyburn said the federal government ought to “rethink the parameters” of the First Amendment in response to the shooting – which wound up having absolutely nothing to do with the pervasive frustration of the electorate at the time.

So … how does Haley’s policy of “rhetorical disarmament” (and ideological appeasement) jibe with the mood of the GOP electorate?

“No one is hiring the modern day equivalent of June Cleaver as president and that’s basically what she’s trying to be,” one national operative told us.  “(She’s saying) ‘Now Wally and Beaver, we’re all a family and should respect each other’ – a nice sentiment, reassuring (and) often right. But often naïve, too.”

Naïve … not to mention downright offensive to those of us who don’t like our ideological convictions compared to race-based hate.

In fact one conservative activist in South Carolina responded that Haley had betrayed “the Tea Party who put her in office – and I will be as loud as I want to be!”

“Philosophy aside, she has a lot of the same problems that Paul Ryan and Marco Rubio have,” the operative continued.  “They are likable but not particularly big personalities (who) people automatically follow.  However, they have a small group of dedicated fans who desperately want to believe they are smarter, tougher, more principled, and inspirational than they really are.  She’s too much the type of friend who if she came upon you in the middle of a street fight, would stop and ask questions about who started the fight and why before trying to break it up rather than just diving in and throwing haymakers out of loyalty to you.”

“Nice, motherly calm works following the prince of pretentiousness and that’s really all that matters in this one-off situation,” the operative told us.

What did you think of Haley’s speech?  Vote in our poll and post your thoughts in our comments section below …