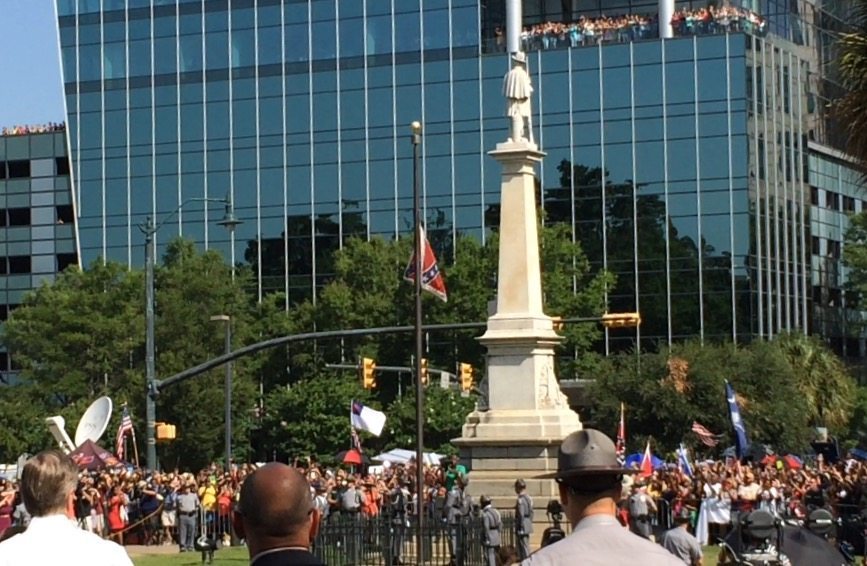 In a matter of seconds – using a few flexes of his tricep muscles – a member of the S.C. Highway Patrol honor guard took down the Confederate flag from the north lawn of the S.C. State House.

Hundreds of onlookers erupted in applause.

Others stood stoically. A few holding the bygone banner over their shoulders wiped away tears.

But in that moment, a brief but bitter debate over the south’s most celebrated icon drew to a close – less than a month after it began anew with a flurry of bullets in a historic church two hours down the road from the state capital in Columbia, S.C.

The horrific, racially motivated “Holy City Massacre” – the mass murder of nine black churchgoers at the Mother Emanuel AME Church in downtown Charleston, S.C. – was the impetus for the movement to “furl the flag,” another popular chant among the crowd of flag opponents gathered at the S.C. State House for the ceremony.

The Mother Emanuel victims – among them S.C. Senator Clementa Pinckney, the church’s pastor – were gunned down during a Bible study by Dylann Storm Roof, a 21-year-old white supremacist who used the flag as his calling card.

We supported removing the flag (for more on “why” click here and here).  In fact lawmakers pretty much followed our advice in taking the banner down sooner rather than later – as they should have.

In the early morning hours Thursday, the S.C. House voted 94-20 to remove the banner “free and clear” – which is exactly what the S.C. Senate voted to do earlier in the week by a 37-3 margin.  S.C. governor Nikki Haley – a former flag supporter –  signed the bill on Thursday, paving the way for Friday’s lowering ceremony.

How did we get here?  Why was the flag flying from the State House grounds in the first place?

To recap: On April 11, 1961 a version of the Confederate flag was hoisted above the S.C. State House at the request of S.C. Rep. John A. May of Aiken, S.C.  The following March, a resolution sponsored by May was passed to keep the flag flying for one more year.  However May’s resolution contained no end date, and so the flag flew from atop the dome (and from within both chambers of the State House) for another four decades until July 1, 2000.  That’s when a bipartisan, biracial compromise took the banner off the dome (and out of the chambers) and hoisted another version of the flag at its current location on the north lawn of the State House.

That version of the controversial banner has flown ever since … until today.

Where will the flag go now?

Upon its removal, the banner was delivered to the director of the Confederate Relic Room – a government-run facility whose funding this website has repeatedly opposed (along with all non-Confederate museums).

S.C. House members have passed legislation guaranteeing the flag’s “permanent” placement at this facility – along with the construction of a shrine to South Carolina veterans of the Confederate army.

We oppose the creation of such a shrine – as well as the ongoing taxpayer subsidization of any museum.  The Confederate Relic Room should be privatized, and judging by the sizable contingent of flag supporters who gathered for Friday’s historic ceremony – there’s a market out there for such a facility.