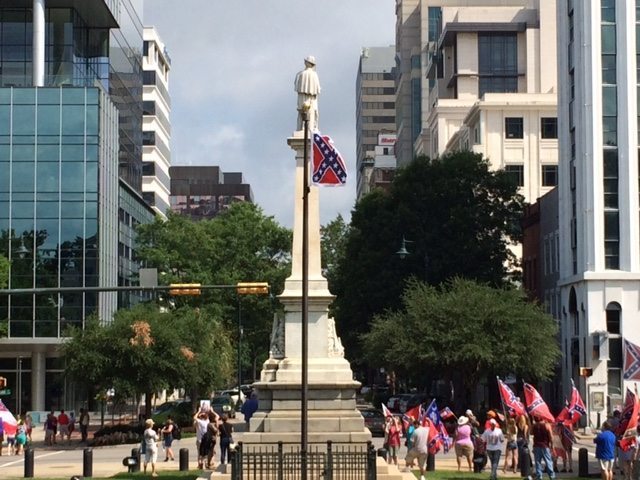 || By FITSNEWS || Barring any unforeseen surprises, the Confederate flag will be removed from the grounds of the South Carolina State House this month … perhaps as early as July 18.

We’ve written extensively in support of this action.  And its need to be addressed expeditiously.  And beyond the obvious motivating factor, we’ve also provided some extensive historical context related to this debate (here and here).

To briefly recap: On April 11, 1961 a version of the Confederate flag was hoisted above the S.C. State House at the request of S.C. Rep. John A. May of Aiken, S.C.  The following March, a resolution sponsored by May was passed to keep the flag flying for one more year.  However May’s resolution contained no end date, and so the flag flew from atop the dome (and from within both chambers of the State House) for another four decades until July 1, 2000.  That’s when a bipartisan, biracial compromise took the banner off the dome (and out of the chambers) and hoisted another version of the flag at its current location on the north lawn of the State House.

That version of the controversial banner has flown ever since …

Now lawmakers have overwhelmingly agreed to revisit the issue in the aftermath of a horrific, racially motivated church shooting in Charleston, S.C.

How will the process work?

On Monday, July 6 the S.C. State Senate will begin debate on S. 897, legislation sponsored by S.C. Senator Vincent Sheheen and twenty-eight other Senators.

The first section of the bill removes language in current state law that allows the Confederate flag to fly from its current location.

The second section reads as follows …

And the third section of the act reads as follows.

This act takes effect upon approval by the Governor.

Obviously S.C. governor Nikki Haley – a one-time flag supporter – has made it clear she would sign such legislation, although sources tell FITS the current version of the bill is likely to be amended so as to include a specific date for the flag to come down.

“I suspect there will be a date certain specified as to when it comes down, as opposed to upon the signature of the governor,” one Senator familiar with the negotiations told us.

But while there are plenty of votes in support of taking the flag down … flag supporters aren’t going away quietly.

For example staunch flag supporter Lee Bright – a State Senator from Spartanburg, S.C. – has vowed to introduce multiple amendments to Sheheen’s bill.  Among them?  A requirement for the flag’s removal to be subject to a statewide referendum of voters.

Another S.C. Senator – John Courson – has reportedly told his colleagues he plans to introduce an amendment to replace the Confederate flag with the Bonnie Blue Flag, which was the banner flown by Confederate forces during the Battle of Fort Sumter.  Another rumored Courson amendment would fly the South Carolina state flag from the Confederate flag’s current location and “some other flag” on Confederate Memorial Day.

Courson, incidentally, is one of the leading legislators affiliated with “The Quinndom,” the political consulting empire of neo-Confederate leader Richard Quinn, Sr.

Meanwhile over in the S.C. House of Representatives, multiple lawmakers – including several affiliated with “The Quinndom” – are reportedly preparing amendments in anticipation of Sheheen’s bill arriving in their chamber.

Could any of these proposed modifications derail the flag’s timely removal?

The root issue? Those who support the flag don’t want to see it go without some concessions made … while those who want the banner gone are in no mood to make any such concessions.  This could lead to a potentially combustible environment – and a recently announced Ku Klux Klan rally, alleged threats against lawmakers and robo-calls attacking flag opponents have made members of the S.C. General Assembly exceedingly nervous.

Our advice to them?

Don’t get cute with “compromises.”  Get the flag down.  Get it down quickly.  Then move on to the larger issues facing this state … issues which have been neglected for decades (holding white and black citizens back).