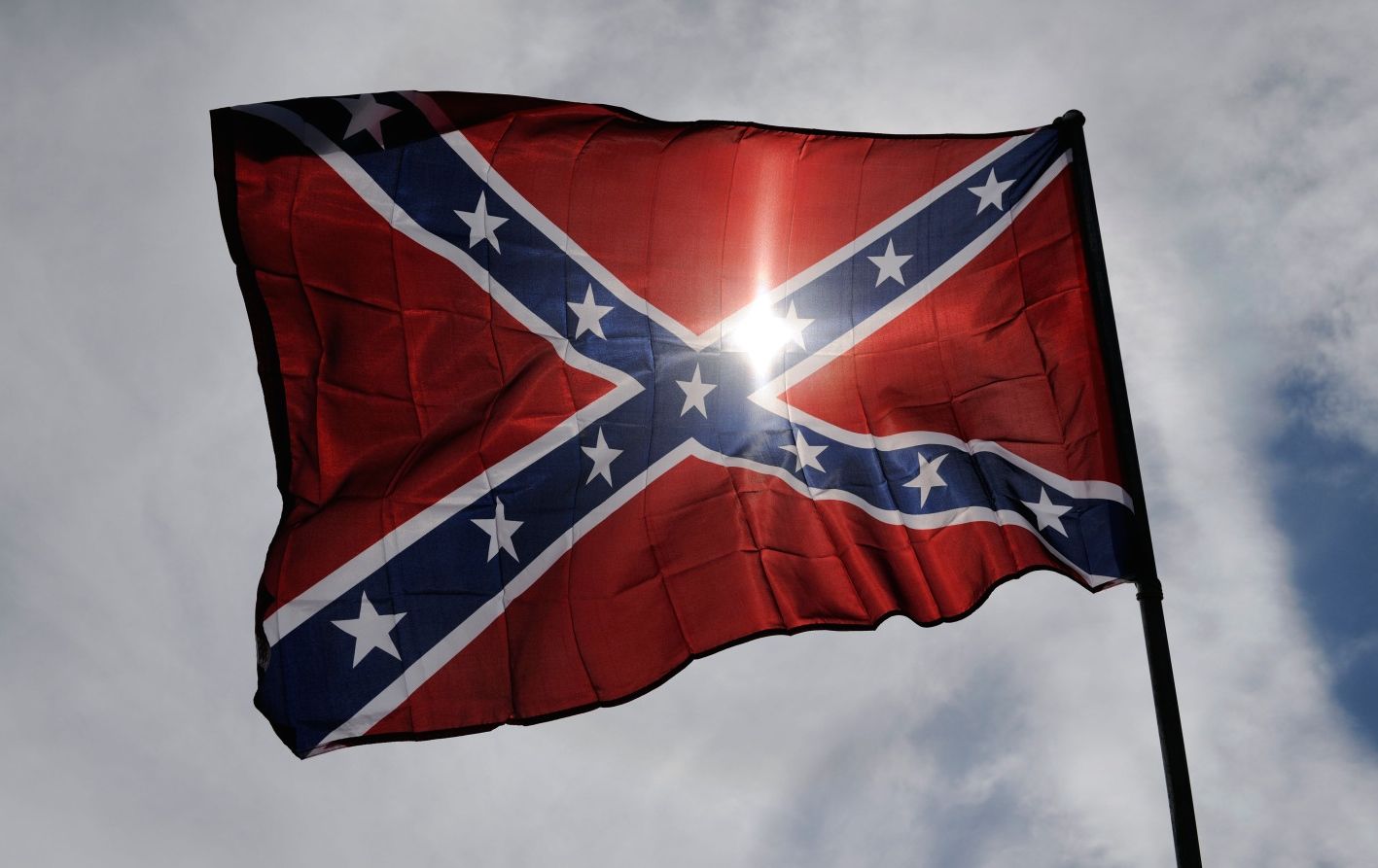 “THE SCANDAL WILL RISE AGAIN …” BUT DOES THIS HIT PIECE MISS THE MARK?

|| By FITSNEWS || There’s a sprawling piece in Buzzfeed this week (from reporters Andrew Kaczynski and Ilan Ben-Meir) on the tormented racial history of U.S. Senator Lindsey Graham‘s top political advisor.

“Republican Senator’s Adviser Formerly Served As Editor Of Neo-Confederate Magazine,” the headline blares, and from there Kaczynski and Ben-Meir launch into an exhaustive review of the many off-color opinions offered years ago by Graham advisor Richard Quinn, Sr. during his lengthy association with a publication known as Southern Partisan.

Quinn, of course, is the leader of early-voting South Carolina’s largest “Republican” consulting empire – the “Quinndom.”

The gist of Buzzfeed‘s story?  That Quinn wrote extensively for (and Graham appeared in) a publication which assailed iconic black leaders like Martin Luther King, Jr. and Nelson Mandela – while at the same time praising white supremacists like David Duke.

The Buzzfeed story is juicy.  And in-depth.  And national.  And has the potential to be very damaging – to both Graham and the “Quinndom” (to say nothing of South Carolina’s already battered national image).

“The Quinns are a national liability now,” one Democratic source told FITS.

But let’s be honest: The story is also old news … by nearly a decade and a half.  Seriously, with all due respect to Kaczynski and Ben-Meir, “2000 called – and wants its headline back.”  And more importantly, in our estimation, their expose missed a much larger point about the truly damaging impact of neo-Confederatism in the Palmetto State.  As well as some swipes that could have made it an even more compelling feature.

Quinn’s prior affiliation with Southern Partisan is no secret.  In fact it has already been a national scandal once before … back when advisors to then-Texas governor George W. Bush were throwing everything (including some overtly racist material of their own) at U.S. Senator John McCain in a desperate bid to win the 2000 “First in the South” presidential primary.

So why is this news now?  Is Lindsey Graham’s 2016 presidential campaign so legitimate as to warrant the rehashing of a 15-year-old story about his consultant?

We don’t think so … in fact the more Graham speaks on the national stage, the clearer his unfitness for higher office becomes.

It’s curious, though … Buzzfeed devoted thousands of words to a political advisor who used to be a racist, yet published nary a word about Graham’s threat to use troops against the U.S. Congress if it failed to “restore funding” to the military-industrial complex and the U.S. spy state.

Also, Kacynski and Ben-Meir clearly need some lessons from us when it comes to sharpening the blade … and thrusting it in the heart.

For starters, what story linking Graham to a racist (sorry, formerly racist) political consultant would ignore the Senator’s bizarre remarks at an elitist, whites only club in Charleston, S.C. last fall?

Graham may have been joking, but his comment that “white men who are in male-only clubs are going to do great in my presidency” should have received a prominent placement in Buzzfeed‘s hit piece.

More to the point, what story about the neo-Confederate roots of Quinn’s consulting empire would ignore the tens of millions of tax dollars squandered on the Confederate submarine H.L. Hunley?  Tax money was funneled for years to this project (and other neo-Confederate line items) at the behest of former Senate leader and lieutenant governor Glenn McConnell, a longtime member of the “Quinndom.”

Including McConnell in the narrative would have not only given the Buzzfeed piece a critical fiscal angle (i.e. government subsidizing neo-Confederate spending), it would have enabled them to reference this story …

And of course this visual of McConnell … 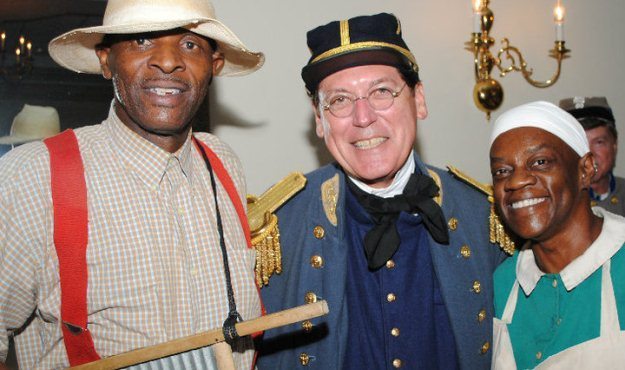 Again … we don’t think Richard Quinn’s disavowed musings from decades ago constitute a fresh round of national attention (certainly not in the context of a presidential campaign that has one foot in the Pentagon and the other foot in the nut house).

But come on Buzzfeed … if you’re gonna throw a punch, throw the punch.

I remember The Partisan from many years ago – it was a pretty good magazine, and, after all, was a publication of (or closely allied with) the Sons of the Confederacy organization. Last time I paid any attention, there is still a state-issued “vanity tag” license plate for the SCV.

Steve Benjamin is a client.

But while he’s a Democrat, he’s not the “Democratic Party”.

There may be a few others…

Ahhh, the Hunley. Or as I like to refer to it, “Glenn McConnell’s wet dream.”

“nary a word about Graham’s threat to use troops against the U.S. Congress if it failed to “restore funding” to the military-industrial complex”

That’s because the “anti-war” Left disappeared shortly after Obama was elected.

Now that their boy is in office, “war is ok”…or in most cases, they just remain silent. Remember how anti-war they used to be?

Also, “Neo Confederate” is a literal dog whistle for the Left as well. The SPLC is constantly warning Liberals about “neo confederates” and host of other “hate” groups like they are taking over the country..lol

They are the Left’s version of Rush Limbaugh or Mark Levin with all the associated hyperbole and hypocrisy.

The manager at Books-a-Million just notified me that they have no information on the publication of the “Haley-Folks” expose. He did put my name on the waiting list. He was curious, though, because I was the eighth person to ask about it.

What?? I thought it had been out for years along with the book covering other topics like who took Wingo’s SAT, Spiller’s lake house, Watkins’ family’s resort vacation, etc.

Will Folks is a joke and if anonymous commenting was disabled, this sites hits would dry up FAST. As it is, this blog gets a majority of hits and rehits from the handful of people who come here to troll each other anonymously.

You are probably underestimating the # of people that simply come here & read the articles(and comments) and never post.

300,000 unique visitors a month is nothing to sneeze at…(assuming Will is not exaggerating, I know some here might think he is)

No, they really just come here to read the witty banter in the comments.

Thank you! — from me. and those others who provide (in addition to intelligent, knowledgeable, and/or instructive comments) . Tu Yung Tu, my young Asian housekeeper and cook, enjoys reading them to me – she says it improves both her spelling, pronounciation and reading comprehension. She’s a “hoot” – I just may keep her!

That’s why I come here…

however, am amused by your handle, Not Me

Many of us are grateful to Sic Willie for providing this forum, and it is unlikely that you would be banned — so post away! Your comment did bring to mind the incident in 1988 of the BLOOM PICAYUNE (All the tales too ticklish to tell) when this announcement was published —

“We no longer feature a “Letters to the Editor” section. We felt it
was high time to drop the pretense of looking as though we respect the thoughts of the grunting gaggle of inarticulate orangutans which call themselves “the public”. It’s also high time other newspaper editors came clean too.

If you feel you simply have to express yourselves, spray-paint
it on the side of a boxcar Just remember, “i” comes before “e” except after “c” and “Casablanca” isn’t a country.”

You will be waiting for a long time. Unless Haley runs for a higher office I think the ship has sailed on a publisher putting his book out. Publishers want money and that kind of book would have sold best around 2010. She will have to run for something much bigger for that chance to come around again.

This “Quinndom” thing needs to stop. If you keep telling someone over and over again how great they are, they may begin to believe the hype.

…“The Quinns are a national liability now,” one Democratic source told FITS.”..

Hey asshole, when you have a few minutes why don’t you review the “national liability” of some of your Democratic buddies —- here are a few starters:

Gee, Jim, don’t hold back, tell us how you really feel about Democrats…

Typical response from a Neo Confederate,”Oh yeah well what about…”

Oh yeah well what about the War of Northern Aggression

Lindsey has no chance at presidency, and he knows it…most likely he is aiming for the vice-presidency, given all the chest beating with the other pro-war minds. James Buchanan was the only president who was never married and that will not change because people expect their president to be married these days and the first-lady’s office is a big business with all the initiatives, lobbyists, fund risings and programs and there is no way the presidency will ever be in an eternal bachelor’s hands. Presidency, as an institution, has come too far for this to happen. IMO.

Secretary of Defense is his goal.

He can be SoD now! Heck, no one wants that job in this administration and Obama will be too happy to sacrifice Lindsey’s political career by making him the SoD, he only will have to make that wish and Barack will make that happen for sure!

But Lindsey will be able to get married after the Supreme Court decision expected this summer.

Karma is a bitch….

“But let’s be honest: The story is also old news … by nearly a decade and a half. Seriously, with all due respect to Kaczynski and Ben-Meir, “2000 called – and wants its headline back.”

But that was before:
HANDS UP! DON’T SHOOT!
I CAN’T BREATHE.
Clemson Cripmas
Ferguson, MO
U of OK SAE fraternity bus ride
… and several other racial stories of recent history.

Race is in the news. And with the 2016 election cycle starting its full swing, the Southern view or Richard Quinn might factor in.

The flag should be flapping towards the right ….

What these writers don’t get is that Neo Confederatism is a well thought of movement among most SC Republicans.

Yeah, but it may be good for finally doing in the MSM’s affection for the ‘bipartisan’, work across the aisle Lindsey Graham once and for all. (If you pay attention long enough you know the MSM elevates that type above all others even when it’s almost always a false narrative.)
He’s been getting passes from them since he ran the Clinton impeachment in the House. They may find him just a little too low down dirty now.
He deserves it. They may even stop inviting him on all the Sunday talk shows. That would be a blessing for the nation.

You left out Curtis Loftis. He also has Quinn on the payroll. Richard was even in his government office right before the primary in 2014.

Why does the NAACP & Co. GET TO DEFINE A HISTORICAL AMERICAN FLAG?

TELL THE SC LEGISLATURE NOT TO NEGOTIATE WITH THE NATIONAL ASSOCIATION FOR THE ADVANCEMENT OF CERTAIN PEOPLE.

Note: the Hunley group also has Richard Quinn’s daughter on the payroll, in
case no one noticed.
http://hunley.org/main_index.asp?CONTENT=CONTACTUS