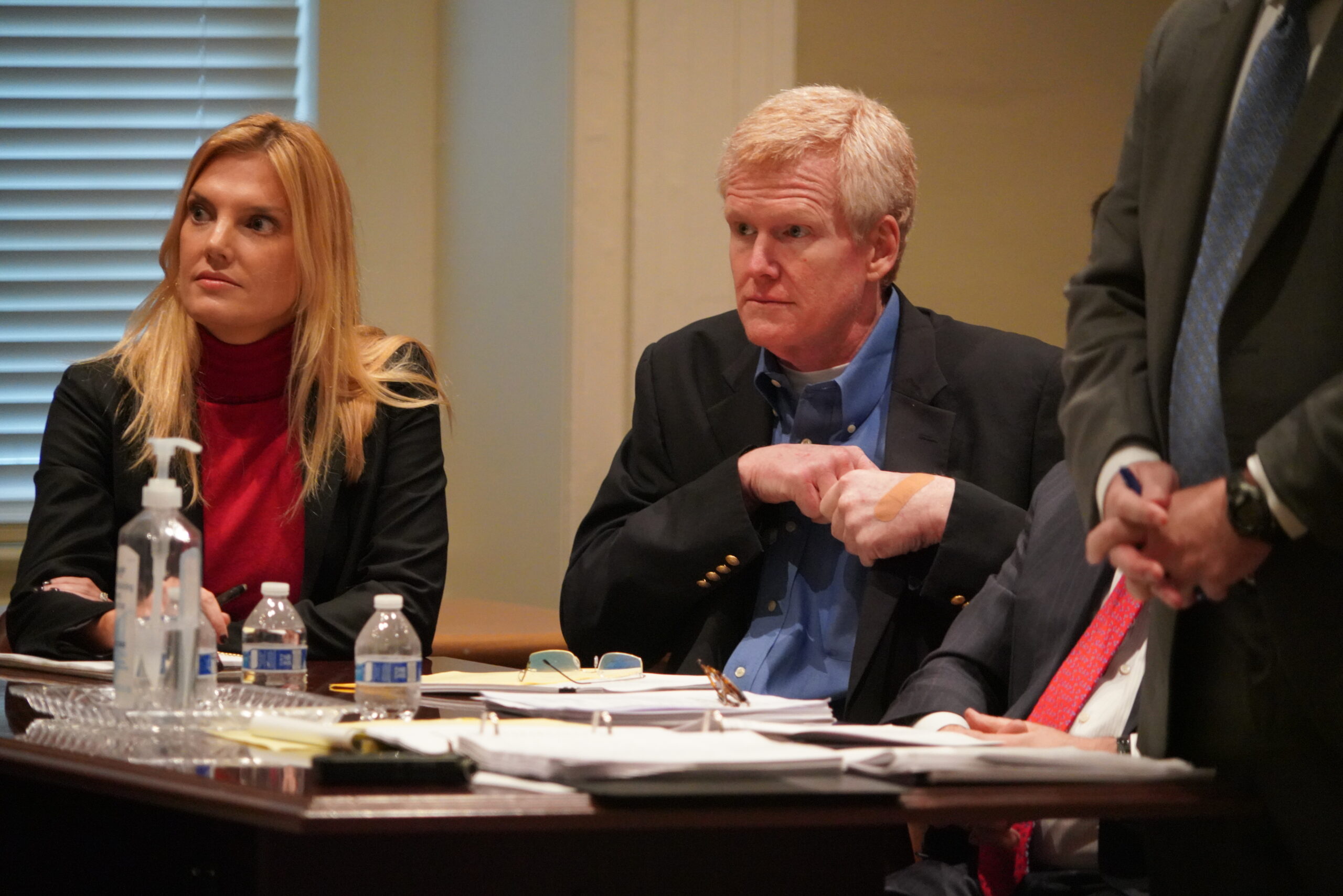 Accused killer Alex Murdaugh appeared in the same Colleton County courthouse on Friday where he will stand trial for murder next month – watching as attorneys jockeyed for position on several issues which could prove central to those upcoming proceedings.

Murdaugh’s double homicide trial is at the heart of the ‘Murdaugh Murders’ crime and corruption saga – a Southern Gothic drama which has drawn international headlines and generated a cottage industry of podcasts, documentaries and other true crime productions.

The disbarred lawyer appeared before S.C. circuit court judge Clifton Newman looking vastly different than he has in previous court appearances. Murdaugh – whose initial court appearances featured him in shackles and a prison jumpsuit (or clothes borrowed from his attorneys) – strode into the courthouse unshackled, wearing a navy blue blazer, blue shirt and khaki pants. Murdaugh had also regrown his strawberry blonde hair after shaving it prior to hearings held earlier this year.

As he listened to arguments and reviewed documents, Murdaugh donned a pair of thin, wire-framed glasses – a slight tremor visible in his left hand, which had a band-aid on it.

Friday’s hearing was a mixed bag addressing multiple issues raised in court filings submitted in the weeks which led up to it. Murdaugh – represented by attorneys Dick Harpootlian and Jim Griffin – did win a key point when Newman ordered the state to comply with a recent motion compelling it to produce all communications with forensic analyst Tom Bevel.

Bevel is one of the experts retained by the state in this case – and according to the defense he has offered conflicting opinions as to the presence of high velocity blood spatter on a white T-shirt worn by Murdaugh the night his wife and son were murdered.


According to Harpootlian, agents of the S.C. State Law Enforcement Division (SLED) pressured Bevel to change his original report, which stated “the stains on the white T-shirt are consistent with transfers and not back spatter from a bullet wound (emphasis original),” according to the filing.

Bevel changed his story after SLED agents allegedly “cajoled” him during a visit to his office in Oklahoma, according to the defense. In fact, Harpootlian and Griffin insist the purpose of this trip was to intimidate the expert into reversing his original assessment of the evidence.

“How Bevel changed his mind is material to the credibility of his opinions on spatter evidence,” they noted.

Harpootlian asked Newman to hold a hearing on the Bevel report in anticipation of the defense filing a motion to exclude Murdaugh’s shirt as evidence. In doing so, he showed a bit of grace to lead prosecutor Creighton Waters – who acknowledged having been caught unawares by the original defense motion detailing the existence of the conflicting reports.

“In his defense, I don’t think he had a lot of this before we did,” Harpootlian said, referring to the original version of the report as having been found in a folder by Holli Miller (above), a paralegal at his Columbia, S.C.-based law firm.

“We were looking for a needle in that terabyte haystack,” Harpootlian said, referring to the massive amount of data provided by the state.

According to Waters, scheduling a hearing related to the shirt was “premature.”

Waters said he was in the process of “assessing the viability” of the evidence – essentially determining whether to use it at trial. Accordingly, Waters asked Newman to “give scientists time to assess the science” before engaging in a debate over the viability of the evidence.

Waters acknowledged he had not been made privy to what Harpootlian termed the “initial Bevel report.”

“That report was not provided to my office in the normal course of discovery,” Waters admitted.

According to him, he did not see the document until November 30, 2022 during a visit to SLED headquarters – a week after it was referenced in Harpootlian’s filing.

After hearing arguments from both Waters and Harpootlian, Newman granted the defense’s motion to compel production of all communications between Bevel and the state.

After addressing the Bevel issue, Newman turned the proceedings over to Waters (above) to discuss the state’s recently filed motion detailing its theory of Murdaugh’s motive for committing the murders.

“This was a white collar case which culminated in two murders,” Waters said. “A slow burn, which was heating up and heating up until June 7, 2021.”

Waters referred to Murdaugh’s alleged litany of financial crimes as “an unbroken chain.”

“Every single year he stole money from clients,” Waters said, referring to the 90 individual financial crimes Murdaugh stands accused of committing as part of his “schemes to defraud victims” of nearly $9 million.

“Theoretically a Ponzi scheme can go on forever – as long as there is new money,” Waters said.

Later in the hearing, Waters noted “every time (Murdaugh) gets an infusion of cash – six figures – it’s gone within a matter of months.”

Even though the influential lawyer was making six figures and seven figures of income, stealing millions of dollars from clients and borrowing millions from his law partners and convicted fraudster Russell Laffitte, “it wasn’t enough to keep Alex Murdaugh’s head above water,” according to Waters.

It all came to a head on June 7, 2021, when prosecutors said Murdaugh was confronted by the chief financial officer at his former law firm about missing money.


Murdaugh was also scheduled to appear in court the week of the murders. The purpose of that hearing? To supply financial information related to a wrongful death case stemming from a February 2019 boat crash which claimed the life of 19-year-old Mallory Beach of Hampton, S.C.

That case exposed him and his son Paul – who was driving the boat at the time it crashed – to significant potential liability.

“The day of reckoning was upon him,” Waters said. “He was out of cards to play.”

Griffin disputed the state’s theory of motive – arguing the deaths of his wife and son did not benefit Murdaugh financially.

“There is no evidence that Alex Murdaugh would have reaped any financial windfall from the murder of Maggie or Paul,” Griffin said.

Griffin also rejected suggestions that either Maggie or Paul knew about his precarious financial situation – and were therefore a threat to expose him.

“There is no indication either of them were a risk to disclose anything related to any financial misdeeds,” Griffin said.

Griffin (above) further rejected the contention that Murdaugh was trying to gain public sympathy – noting Murdaugh’s father, former solicitor Randolph Murdaugh III, was on the verge of death and had “all the sympathy in the world coming his way.”

As for whether the state needed to provide additional information regarding its theory in the form of a “bill of particulars,” Griffin acknowledged the sufficiency of the state’s filing.

“We are satisfied with that,” Griffin told Newman.

“I am not trying to set a precedent in South Carolina to file a motion in every case for a bill of particulars,” Newman told Griffin.

In a preview of how he plans to address pretrial motions, Newman indicated an inclination to rely on circumstantial discernment.

“Arguments are not evidence and lawyers aren’t witnesses,” Newman said. “Appropriate rulings will be made at the appropriate time. Each case is unique – and rulings must be fashioned according to the particulars (of those cases).”

In a decision underscoring the uniqueness of this case, Newman issued a ruling from the bench instructing the clerk of court to remove a painting of Murdaugh’s grandfather – Randolph “Buster” Murdaugh Jr. (above) – from the courtroom during the upcoming trial.

Like Randolph Murdaugh III, “Buster” was solicitor for the state’s fourteenth judicial circuit – which encompasses Allendale, Beaufort, Colleton, Hampton and Jasper counties. Three generations of Murdaughs held the post from 1920-2006.

At the time of the murders, Murdaugh was a badge-carrying assistant solicitor in the office of Duffie Stone, who was elected solicitor in 2006 with the Murdaughs’ financial support and imprimatur.

Neither prosecutors nor defense attorneys offered any objection to Newman’s decision to take down the painting during the trial.