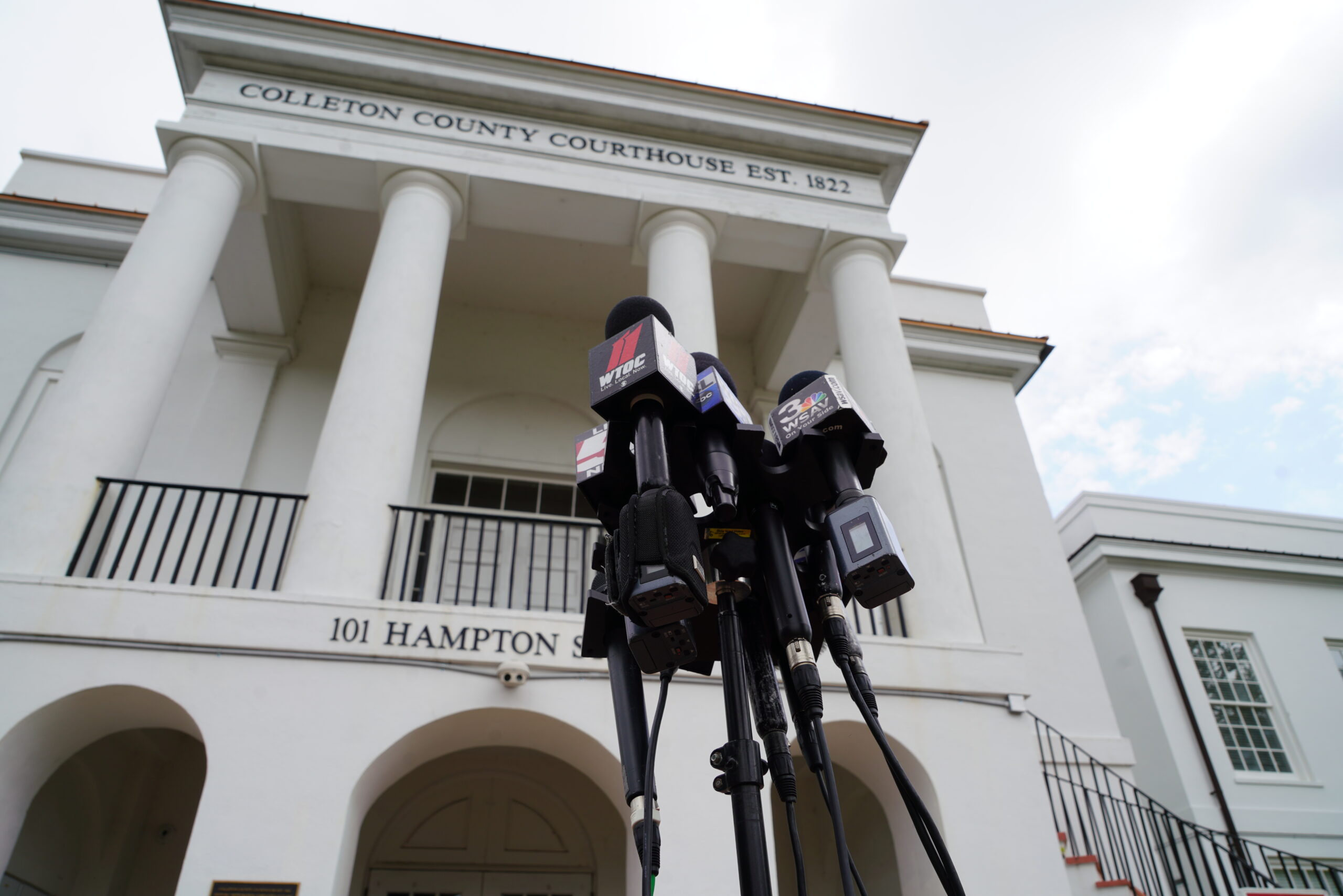 All eyes will be on state senator Dick Harpootlian – the lead lawyer for disbarred attorney/ accused killer Alex Murdaugh – this coming week as he seeks to compel evidence and testimony from multiple agents of the S.C. State Law Enforcement Division (SLED). Along with the office of S.C. attorney general Alan Wilson, SLED is currently leading the myriad criminal investigations tied to the ‘Murdaugh Murders’ crime and corruption saga.

Harpootlian will make his arguments against SLED – and against Wilson – at a court hearing held in Walterboro, S.C. on Monday morning.

Murdaugh will also attend this hearing – which will be presided over by S.C. circuit court judge Clifton Newman.

At issue? Whether investigators and prosecutors have attempted to “hide the ball” from defense attorneys as it relates to evidence – while simultaneously leaking “information about evidence” to the media, to quote a motion filed by Harpootlian earlier this week.

In an effort to document his allegations, Harpootlian issued subpoenas on Thursday for multiple SLED agents – and is reportedly prepared to “name drop” the individual whom he believes is responsible for allegedly leaking news of Murdaugh’s July 14, 2022 murder indictment to this news outlet.

Murdaugh has pleaded not guilty to murder and weapons charges filed against him in connection with the June 7, 2021 slayings of 52-year-old Maggie Murdaugh (his wife) and 22-year-old Paul Murdaugh (his younger son).


SLED public information director Renée Wunderlich declined to comment on Harpootlian’s subpoenas last week, saying only that her agency was in the process of reviewing them. Wunderlich was not immediately available to comment on the status of that review when reached for comment on Saturday afternoon.

Several sources familiar with criminal procedure in the Palmetto State indicated they would be “shocked” if Newman required SLED agents to take the stand on Monday.

“Dick is a master showman but I don’t think he has a leg to stand on here, certainly not insofar as compelling agents to testify,” one veteran trial lawyer told me. “And certainly not based on anything he has submitted to the court thus far.”

Also, sources following this case told me law enforcement agents were well within their rights to “continue utilizing anything found in a search to advance an investigation” – assuming the warrant which produced the evidence was sealed in the first place.

“He’s operating under the assumption (SLED) had a search warrant which was sealed,” one source told me.

Still, a defense lawyer who spoke with me on condition of anonymity cautioned Harpootlian had yet to tip his hand.

“There are cards he is not showing here, mark my words,” the defense lawyer warned. “Dick is not going to start something like this and not have an end game.”

I concur with that assessment. Also, it could be Harpootlian’s “end game” for this hearing is as simple as pushing the state to turn over case information which was due to be delivered to him and his defense co-counsel, Jim Griffin, on August 15.

This information was being prepared for delivery two weeks ago, according to my sources, but Harpootlian reportedly reneged on an agreement to place a protective order on some of the evidence at the last minute.

Harpootlian has accused SLED agents of improperly sharing information related to the murder investigation with members of Alex Murdaugh’s family. According to his latest motion in this case, SLED agents provided evidence – specifically a video taken from Paul Murdaugh’s cell phone – to members of Murdaugh’s family “at the direction of the attorney general’s office … without obtaining an order authorizing the disclosure of this information to potential witnesses or third parties.”

Previously, Harpootlian accused the attorney general of leaking evidence and other information prejudicial to his client to members of the media. Wilson’s office has called Harpootlian’s allegations about leaks “categorically false” – a statement I believe to be accurate.

It is unclear whether the four SLED agents subpoenaed – Ryan Kelly, Charles Ghent, David Owen and Ryan Neill – were involved in the meeting with Murdaugh’s family at which the video was purportedly shown.

This video at the heart of the dispute is one part of what law enforcement sources have described as a “mountain of evidence” against Murdaugh – including high-velocity impact spatter which has reportedly placed the disbarred 54-year-old lawyer at the scene of the murders at the precise moment one of the victims was killed.

So … can Harpootlian get these agents on the stand?

And if so … can he prove they acted improperly?

And if so … can he convince Newman to exclude evidence from the upcoming trial based on that alleged impropriety?


“Any attempt to compel testimony like this faces a high hurdle,” a source following the case told me.

“He’s going to have to make an argument to the judge as to why they should be compelled to take the stand,” another concurred.

Harpootlian has been using the alleged leak of the video – and of other evidence – to drive the narrative surrounding this case for the better part of the last week-and-a-half.

The problem? As I noted in an expansive piece on this subject earlier this week – and in the latest edition of our popular ‘Week in Review’ program – the evidence in question shreds Murdaugh’s alibi.

“Guess what: That alibi is gone, it is gone,” I noted in the show. “It has vanished into the ether, people, And now Alex Murdaugh’s attorneys are admitting he was exactly where these murders took place at exactly the time they were committed.”

To watch the Murdaugh segment of this week’s show, go to the 8:15 mark of the video below …

To recap: Maggie and Paul were killed at Moselle – the Murdaugh family’s sprawling 1,700-acre hunting property next to the Salkehatchie River on the border of Colleton and Hampton counties. Paul Murdaugh was hit by a pair of shotgun blasts – one to the head, the other to the arm and chest. Maggie Murdaugh was killed by multiple shots from a semi-automatic rifle at or around the time her son was killed. At least two of Maggie Murdaugh’s gunshot wounds were reportedly inflicted as she was laying on the ground – consistent with initial reports I received of “execution-style” slayings.

As this news outlet exclusively reported, Murdaugh was charged with murder in connection with these killing last month. He has pleaded not guilty and is currently scheduled to stand trial in January 2023.

This news outlet will be at the Colleton County courthouse in Walterboro, S.C. on Monday morning at 10:00 a.m. EDT providing coverage of all the latest drama.