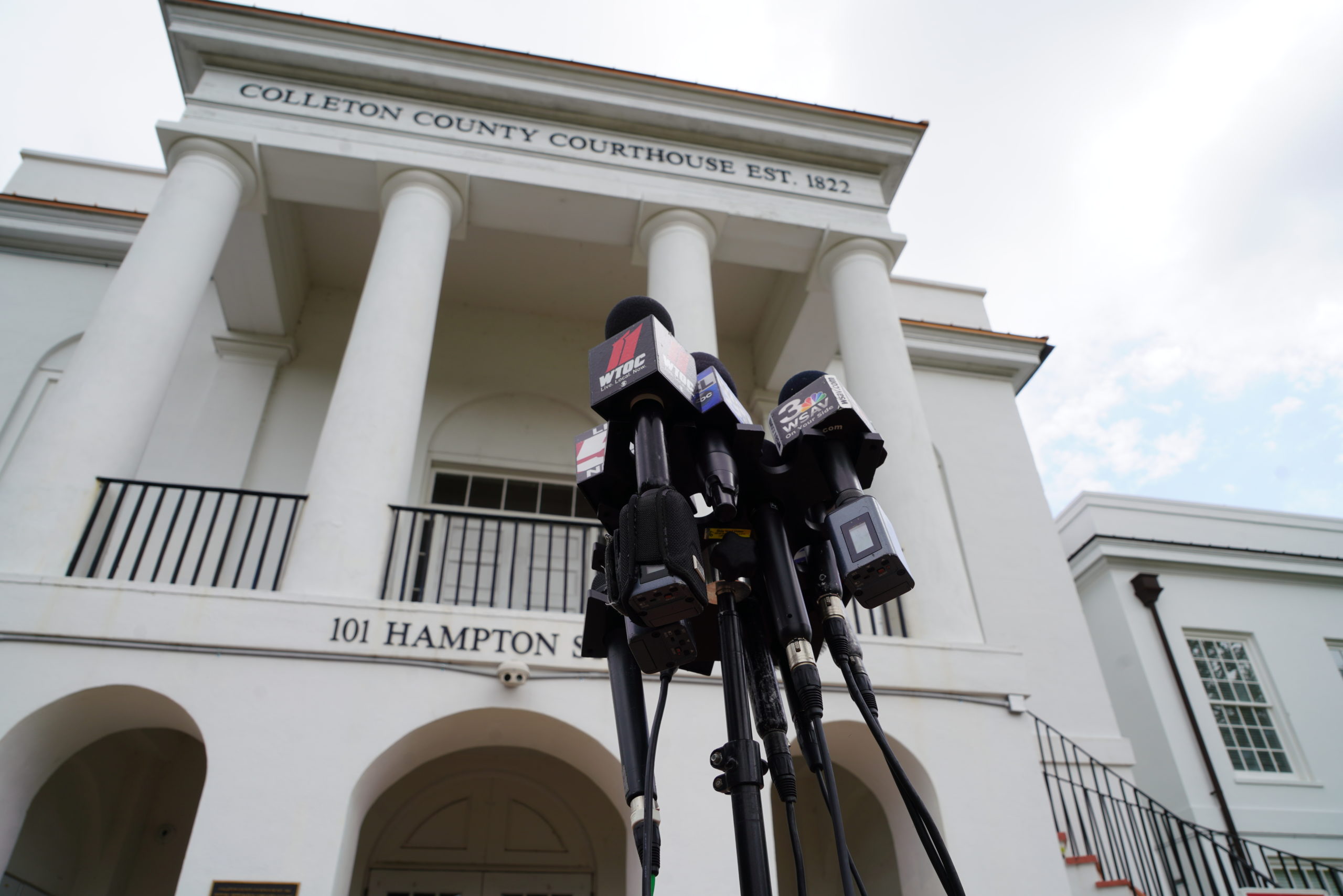 A bank of television microphones stood lonely – deliberately unaddressed – outside of the Colleton County, South Carolina court house on the morning of Wednesday, July 20, 2022. In the aftermath of any other high-profile murder hearing, the midsummer morning air would have been filled with the rapid-fire clicking of camera shutters and the thunderous, thick-drawled assertions of the various protagonists to the drama.

Brows would have furrowed, fingers would have pointed and pauses would have been impregnated … and at the end of it all, the media would have packaged the propaganda from all sides with its own spin prior to offering up final edits up for public consumption.

At that point, the marketplace of ideas would have held sway over the events of the day … holding all of those involved (including the press) accountable for what transpired.

That is what it’s all about … and that is why I have pushed so hard for maximum transparency in the Palmetto State’s judicial system.

“The courtrooms belong to the people,” I noted last week.

And so do the cases which move through them …

Inside the Walterboro, S.C. court house on Wednesday, however, prosecutors and defense attorneys in the ‘Murdaugh Murders’ crime and corruption saga surprisingly agreed to the imposition of a gag order – a court-imposed muzzle which would prohibit all parties from speaking publicly about the murder case against disbarred attorney Alex Murdaugh.

More ominously, the gag order would keep all motions and filings related to this case – and potentially other Murdaugh-related matters – under seal.

Only information disclosed in public hearings – and at the eventual trial – would be permissible to discuss.

This proposed gag order put S.C. circuit court judge Clifton Newman in the unenviable position of having to go against the wishes of both parties if he wants to preserve the transparency of these proceedings – which he clearly wants to do.

Newman – a staunch advocate for openness in the Palmetto State’s unacceptably opaque judicial system – made no secret on Wednesday that he believes public business should be conducted in public. In fact, he said he “specifically disfavors” the use of gag orders.

Lamentably, the decision by deputy S.C. attorney general Creighton Waters to acquiesce to the wishes of powerful defense attorney (and state senator) Dick Harpootlian likely left Newman with little choice in the matter.

As a result, the public is likely to be left in the dark … at the very moment sunlight needs to be pouring in.

The dark … that’s where justice has operated in the state of South Carolina for far too long. And that’s why the ‘Murdaugh Murders’ crime and corruption saga – which has dominated headlines across the Palmetto State for months – isn’t just about the pursuit of justice against accused murderer Alex Murdaugh.

Or his former law firm …

Or the small cast of co-conspirators currently indicted in connection with the various crimes he is accused of committing … (one of whom was indicted at the federal level just this afternoon, opening a new front in the investigation into this criminal syndicate).

Even if South Carolina’s judicial system had a sterling reputation for independence, integrity and industriousness (none of which it has, incidentally) we should still demand access to every shred of paper it produces. In every case. Because those are our papers.

They belong to us.


For years, my news outlet has explored (and exposed) virtually every facet of South Carolina’s uneven, inefficient and anti-transparent system of “justice” – leading the charge for long-overdue reforms in the bonds it doles out, the sentences it administers as well as the circuit court’s utter failure to move cases expeditiously.

Most importantly, I have repeatedly challenged South Carolina lawmakers to scrap their notoriously corrupt method of judicial selection. This chronic, cozy insider-ism has rendered the judiciary in the Palmetto State little more than a hostage to powerful lawyer-legislators like Harpootlian. And ‘Stockholm Syndrome’ is in full effect, people.

Nowhere has this insider dealing and backroom back-scratching been more pronounced than in the Palmetto Lowcountry – including Colleton County.

The judicial branch of government in the S.C. fourteenth circuit has been marionetted for decades by Murdaugh, his powerful family and the influential law firm it founded a century ago. Hell, the very courtroom in which this gag order was proposed is adorned by a painting of Murdaugh’s grandfather, Randolph “Buster” Murdaugh Jr.

Buster was fourteenth circuit solicitor from 1940 until his retirement in 1986 – preceded by his father and succeeded by his son. Ironically, the most famous case involving the late prosecutor involved him being on the receiving end of an indictment. Even more ironically, he used a bastardized conception of “transparency” to get himself off the hook on those charges.

According to federal records obtained by this news outlet, Murdaugh – along with former Colleton county sheriff Haskell Thompson and more than two dozen co-defendants – was indicted by federal authorities in 1956 for “having conspired over a period of several years to violate the internal revenue liquor laws.” Two circuit court magistrates – including one who appeared as a witness for the government – were also part of this conspiracy.

“The case attained wide notoriety in South Carolina because Murdaugh, at the time of his indictment, held the office of Solicitor for the fourteenth judicial district of South Carolina and Thompson was Sheriff of Colleton County,” a November 1956 bulletin from the U.S. Department of Justice (DOJ) noted.

The federal bulletin laid out in chapter and verse the tactics employed by Murdaugh and his allies in response to the charges filed against him.

“Before the trial, the Court over the strenuous objection of the government granted the defendants’ motion for disclosure of the names of the government witnesses,” the bulletin noted. “This was followed by very questionable practices on the part of some of the defendants and their attorneys, during which government witnesses were threatened, attempts were made to influence them by promises of reward for themselves or members of their family, and at least one attempt was made to intimidate or influence the United States Attorney.”

Yeah … where was the gag order in that case?

Apparently, the Murdaughs are all for transparency when it facilitates their dirty dealings. They just don’t like it when it exposes those dealings.

Either way, though … they certainly seem to still be calling the shots.


Look, I get it. The murder case against Alex Murdaugh is incredibly strong. There is reportedly forensic evidence. Video evidence. Technological evidence.

A “mountain of evidence,” to hear the reporters at People tell it … or rather re-tell it.

“The evidence in this case is substantial,” Waters told the court on Wednesday. “(And) it all comes back to Alex Murdaugh.”

Prosecutors feel they have an ironclad case … having reportedly shredded Murdaugh’s so-called “ironclad alibi.” They also plan on providing would-be jurors with an overabundance of motive, sources familiar with the investigation have repeatedly told me – contradicting statements made by Harpootlian in response to murder charges being filed against his client.

Assuming all of this is accurate, is there any real danger to keeping things under lock and key until this trial begins?

This is South Carolina. And if South Carolina has taught us anything over the last few years (decades? centuries?), it’s that injustice lives in the darkness, thrives in the shadows and only needs a square inch of shade to burrow deep beneath the ground – well below our ability to detect it.

In fact, if there is one family which has demonstrated this disturbing reality more than any other it is the Murdaughs.

Bottom line? Not a single piece of evidence, solitary shred of paper or lone syllable of attorney discourse related to this case should be placed under a seal. The significance of these proceedings – and the stakes for justice in South Carolina – are simply too high.

Thankfully, if there is one judge with the courage to insist upon maximum transparency against such a unified front of opacity – it is judge Newman. I just hope he hasn’t been backed into a corner by this unfortunate bargain between prosecutors and Murdaugh’s defense attorneys.